Right before winter break, a group of students presented a list of recommendations to the St. Paul school board on how the district could better support inclusivity in its schools.

Their recommendations addressed issues like dress codes that are gendered and objectifying, unchecked microaggressions — words or actions that, however subtle or well-intended, make students feel marginalized — and buildings, like Ramsey Middle School, that have been named for historic figures who “violated human rights through enslavement, internment or genocide.”

They conducted 10 focus groups with about 600 secondary students and gathered survey responses from roughly 2,500 of their peers. In the state’s second largest district, the feedback they collected represented a small fraction of the student body, but those on the 13-member Student Engagement and Advancement Board (SEAB) were empowered by their findings to advocate for policy changes that all students stand to benefit from. That list includes things like investing in more staff and student training on microaggressions and cultural humility and intentionally building physical spaces in schools where students can gather and build a sense of community.

Throughout the presentation, they drove home the importance and urgency of this work by sharing personal examples and highlighting how various student subgroups feel that their race, ethnicity and gender impact how comfortable they feel at school.

To wrap things up, Davina Newman, a senior at Highland Park High School, made a pitch to be taken seriously. With a nonvoting seat on the school board, SEAB members are bringing a renewed sense of urgency to some longstanding equity issues in the district — many of which aren’t unique to St. Paul — and want to see the board take concrete actions to improve school conditions.

“SEAB used a lot of nice words in this presentation like ‘equity’ and ‘inclusivity,’ ” Newman said, addressing the board. “But really what we’re talking about is dismantling institutional racism and ending institutional oppression. You ask what you can do to help us. Listen to our recommendations. Look past the fact that we are students and we can advocate for ourselves and really think about why we are making these specific recommendations. It is time for a shift in the way we do things. This is a perfect way to start.”

While district leaders have long recognized the need to include student voices in school governance discussions, designating a student seat on the board is a fairly new concept in the Twin Cities. The St. Paul district approved the creation of what is now called SEAB in 2015, joining at least 90 other school boards across the state that have some form of student representation.

This happened shortly after the Minneapolis Public Schools district added its own seat for a student representative. In Minneapolis, one student is selected to serve for a one-year term. In St. Paul, they’ve opted to take more of a collective approach — empowering a 13-member student group to work with the board, even though they only have one physical seat at the dais. 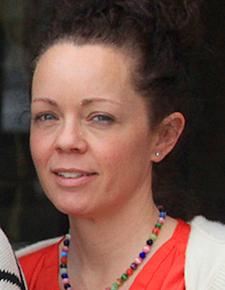 Shaun Walsh, a community education coordinator in the St. Paul district who also serves as an adviser for SEAB, pushed for this composition from the beginning.

“In Minnesota, students can’t have a voting role on a board,” she said. “Since that’s true, we felt having a single seat was tokenizing and it really left that student hanging in the wind by themselves.”

Students apply to join the group, which happens to be an all-female group this year. It’s been a point of criticism from some who think it should be more representative of the diversity in the student body. But there are no restrictions on who can apply, apart from needing to be a sophomore, junior or senior.

“We’re not there yet, but [we want] the most excluded students to feel like they could jump right up to the student board if they felt passionately about it,” Walsh said.

Ruby Sutton, a senior at Central High School, says she applied to join SEAB after transferring to the district from Minneapolis Public Schools her sophomore year.

“I originally had a hard time in a large public school environment in Minneapolis and saw how school environment can really change how comfortable you feel going and your success there. I wanted to get involved in Central, also at a district-wide level, to try and improve schools,” she said, adding she also likes working with policy.

For Skyler Kuczaboski, a senior at Harding Senior High, the drive to join was twofold: She saw it as an opportunity to expand her leadership skills and to bring a native voice to the group.

Serena Jing, another senior on the group representing Central, says she saw SEAB as a way to expand upon some of the important dialogues around social-justice issues she’d be engaging in through her school’s speech team.

As demonstrated by the presentation she helped deliver before the board in December, Jing and her peers are delving into some complex, deeply-entrenched issues — like microaggressions — and coming up with powerful ways to articulate what they look like and how they negatively affect students.

“One form of a microaggression is when a student is asked to speak on behalf of their identity,” she said at the Dec. 13 meeting. “When we are asked to speak on behalf of our identity, you are telling us that we are ‘other.’ That we are not the norm, and that our group is homogenous and can be spoken for by one person. I, for one, have been referenced to multiple times for anything relating to China, or when the huge continent of Asia comes up in class. Being pointed to and then asked to explain what something signifies in my culture is really enough to start a bunch of negative internal thoughts about myself like: ‘Why am I so different from everyone else in this class?’ This is enough to close myself off from participating in that class for a while.”

According to the student survey SEAB conducted this year, she is not alone in this regard. In just the first three months of the school year, 171 respondents said they’d been called upon to speak on behalf of their identity seven or more times. Jing and her peers suggest a lack of representation of diverse student groups in school curriculum is a missed opportunity to promote cross-cultural understanding and empathy needed to end microaggressions.

Last year SEAB focused a lot on the issue of Student Resource Officers in schools. At a time when the relationship between students and SROs had become rather strained, this group of students began asking for greater accountability and transparency. They took the time to talk with their peers in focus groups and found there was a big disconnect between the student experience and adult perceptions.

“This was a time where I saw a lot of students get really passionate about something that mattered to them,” Jing said. “That kind of conversation wasn’t really happening in schools.”

“I think you can learn a lot about why the status quo has stayed the way it is based on what data is being collected and what isn’t,” Sutton said.

Their SRO project resulted in at least one other tangible outcome, Jing added: SROs now wear baby blue polos with a badge stitched on their shirt, instead of their uniforms, so they have a less militant look and are more approachable.

In it’s relatively short existence, SEAB has been granted permission to email the student body directly. With the support of the district’s Research, Evaluation and Assessment Department, as well as the Information Technology Department, they’ve developed an iPad app to administer surveys through. 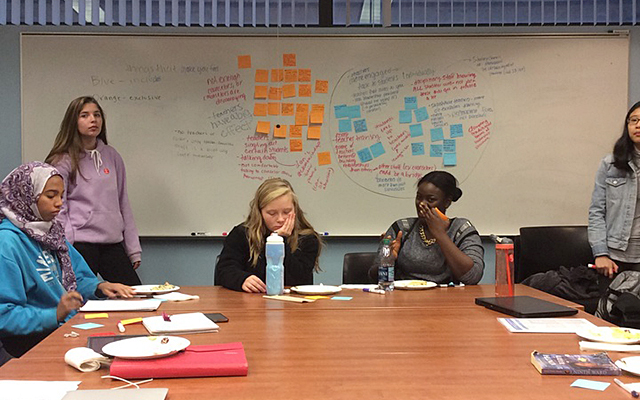 Despite this infrastructure, Kuczaboski says they struggle to motivate students to take their surveys because they’re already inundated with surveys. It’s an area they’d like to improve upon, since this is students’ most direct pathway to affecting district policy.

For this school year, SEAB accepted project proposals from the school board and district administration. They delivered their first batch of recommendations, on how to expand a sense of inclusivity in schools, in December. Since then, they’ve focused on revising the graduation attire policy — possibly before graduation this year — to allow students to better express themselves by wearing culturally significant items at graduation.

“I’ve been at every graduation since I’ve been a freshman and I’ve seen cultural items being taken away in a very disrespectful way at graduation,” Kuczaboski said. “I want to represent my culture at graduation and I want it to be possible for all of my peers to  represent themselves at graduation. It’s clearly important for students if it keeps happening.”

This recommendation is currently under review by the district’s policy committee, along with an earlier recommendation to change the name of Ramsey Middle school, which is named after Alexander Ramsey, who called for the removal of all Sioux Indians in Minnesota.

SEAB students are learning to assert themselves during an interesting period of transition in the district. The new board majority ousted former Superintendent Valeria Silva last June and the search for a new permanent superintendent is currently under way.

While district leaders have generally responded with praise for the effort these students are making to elevate the student voice, some members feel there’s still a disconnect that needs to be addressed.

“In my experience, I don’t think the board has been very receptive. Whenever we present, they talk down to us,” Kuczaboski said, adding it’s frustrating to put in all the effort and practice their board presentations just to essentially get a pat on the head. “It doesn’t really feel like they’re taking us seriously. I’ve also learned that they really like sticking to traditions, which isn’t necessarily a bad thing, but in a lot of things that we’re presenting, it is.”

Sutton added that the questions the board asks SEAB students after a presentation seem to have gotten a bit more substantive. After the group’s presentation on graduation attire, Jing agrees, the board was a bit more straightforward in sharing some of the concerns they had about changing district policy.

On the back end, they’d like to see the board do a better job of following up with them, so they know which of their recommendations have traction.

“Last year we would present and then nothing would really happen. It would be really unclear if they were going to take our recommendations or if they were going to work on it at all,” Kuczaboski said. “It’d be nice if the board could say, ‘We’re going to think about this and we’ll get back to you’ …. It’s gotten better from last year, but there’s still a wall that’s hard to get through.”

Jing, one of the students who helped make the case for why SEAB should exist in the first place, says it wasn’t necessarily an easy sell. “We really argued the importance of transparency, as well as being able to collaborate with them,” she said, noting there’s strategic value in being familiar with the board members and how they approach new ideas.

Limitations aside, Jing says the board has been receptive to some of the ideas put forth by SEAB and that’s gone a long way in validating their work.

“Seeing that our district is wanting to move forward with these changes, that shows that [our] ideas will not necessarily be discarded or discounted and gives me hope that our ideas are becoming more valued,” she said.