Before she gets her high school diploma, Madison Wang, 18, a senior at Mounds View High School, has already generated $39,000 in profits from a tech-related startup that she started as a seventh-grader.

But Wang’s journey in the tech world has also included various kinds of negative pressure and harassment. A long-time player of the game Minecraft, she says she was initially drawn to this source of inspiration because it appeared to be a colorless platform, where players are able to build or do anything, regardless of their race, ethnicity or gender. But she quickly realized that wasn’t necessarily the case, as other players would call her a “slut” or “attention whore” online once they realized she was a girl, she says, or even — in at least one instance — imitate a Chinese accent when communicating with her through Skype.

When she ventured to build a multiplatform server based off Minecraft, she decided to hide her true identity so she wouldn’t have to deal with any harassment.

“In my startup I decided to hide myself as a guy,” she said.

Under the username “Jon” she launched a new server from her laptop in her bedroom and oversaw contributions from volunteers. She created a fake profile with a photo of a male, along with an alternate Skype account, email account and Facebook page. She even remembered to use “him/his” pronouns and went so far as to use a voice changer to disguise her voice on Skype during staff meetings.

By the start of her junior year, Wang says the pressuring of maintaining two separate identities pushed her to a breaking point.

“We shouldn’t have to hide who we are,” she said, recalling that pivotal moment when she decided to “come out” as a female on her website. “Women can be successful and passionate about technology.”

Wang’s one in a long line of talented woman of color who have felt the pressure to assimilate in order to advance in a STEM field, most of which are dominated by white males. 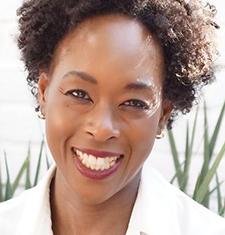 On the heels of World War II and into the civil rights era, African-American women hired by NASA to serve as “human computers” faced many of the same barriers. The contributions of these women during America’s race to space extended far beyond the math they did in a segregated computing wing of the Langley Research Center in Hampton, Virginia. Yet much of this history would have remained hidden if it weren’t for the diligent work of Margot Lee Shetterly, author of the highly acclaimed book-turned movie “Hidden Figures: The American Dream and the Untold Story of the Black Women Mathematicians Who Helped Win the Space Race.”

Shetterly elevated the story of Katherine Johnson, Mary Jackson and Dorothy Vaughan — three African-American women who all go their start at NASA as human computers. Vaughan went on to become the agency’s first black supervisor and one of just a few female supervisors. Jackson pursued courses at an all-white college and became NASA’s first black, female engineer. Johnson helped do the math that made the collective dream of sending an American astronaut into space — and more importantly, return him safely to Earth —  a reality.

Shetterly’s father worked at NASA. Growing up with direct access to many of these women, she says, the role models were in plain sight but still existed in her blindspot. It wasn’t until she began researching their lives that she began to fully realize just how groundbreaking their contributions were.

“Every single time I think about the question of ‘Why haven’t we heard this story before?’ [I realize] it was because our imaginations were not large enough to accommodate these women,” she told a full house at the Northrup on Tuesday evening. “As a society, we are still looking past women, past women of color who are working in the STEM field today. … Just think of the blind spot these women existed in 70 years ago.”

As part of the Distinguished Carlson Lecture Series, hosted by the University of Minnesota’s Humphrey School of Public Affairs, Shetterly recounted how she wrote her book and, in the process, became fascinated in the intersection of race, gender and science.

Through her ongoing work with the Human Computer Project, Shetterly is working to document the stories of the rest of the African-American women whose math, science and engineering skills were instrumental to NASA’s early success. Based on her research, she estimates that there may have been as many as 80 black women working as computers, mathematicians, engineers and scientists across all 10 of NASA’s centers from 1943 to 1980. 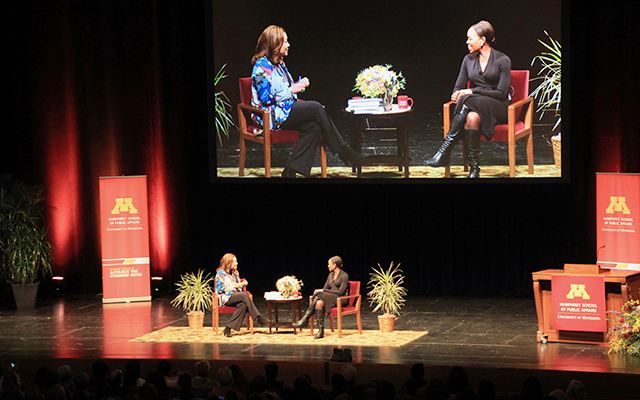 “They show us that there’s talent all around us, if we just know where to look,” she said. “They illustrate the benefits of opening the door of opportunity to all of our citizens and show us how high the stakes can be when we fail in that mission.”

Asked if she’ll be writing a sequel, Shetterly said she has two more books in the works. One has to do with science, with an international angle, and the other looks at African-Americans in the business and entrepreneurial sector.

“All have to do with race, identity, work, and social mobility,” she said.

An agent of change

When Wang began investigating the relationship between women and technology, she found she’s not alone. Research shows that 70 percent of women in multiplayer games play as male characters in order to avoid online abuse.

“I think that’s something we can change in technology and education,” she said. “[That’s] something I want to pursue as a career option.”

Today, women constitute half of the overall workforce, yet only 28 percent of the science and engineering sector. Within these sectors, women only account for a quarter of the computer and mathematical sciences workforce and only 15 percent of the engineering workforce. Women of color are even rarer, with fewer than 1 in 10 minority women employed as scientists and engineers.

Wang’s not intimidated. Patent pending, she is the co-founder of a piece of technology designed to help prevent instances of sexual assault in the physical world. The WachIt Band is a wearable device that, with the push of two buttons, can send a message and location to the wearer’s selected contacts, using bluetooth from a nearby cell phone. Users can also use it to contact the police, if they feel they’re in immediate danger.

Wang explains it’s designed to be discreet and user-friendly, so that even if a student is intoxicated or disoriented, they can still operate the device. It may also double as an anti-kidnapping or elderly help device, she adds.

Wang recently received recognition for her computing and technology innovations through the National Center for Women and Information Technology, and the group’s local affiliate award program, Advance IT Minnesota. Both programs exist to inspire young women to explore computing and technology and to create a community of support for those who have already found their way into these sectors.

Recognition aside, Wang is still acutely aware of the fact that, as a woman of color, she’s still a bit of an anomaly in this space. That hasn’t stopped her from pursuing her dream of majoring in computer science at college so she can continue using her tech skills to create positive social change. She’s currently taking two AP computer science classes — one on internet data and storage, another teaching Java, a programming language — and she’s the only female member of the coding group at school.

“It’s equally empowering to join the group and prove women are not bad coders and perhaps get other women to join too,” she said. “I hope to inspire women, in a way. And prove that you don’t have to be male to code, or to be successful.”