Gone are the days of comparing assigned lunch shifts with friends at Centennial High School, where students now have the option to grab lunch with whomever they want. They don’t have to stay inside the cafeteria, either.

Last Friday, trays in hand, a handful of students made their way to a lounge area nestled between classrooms. A few students pulled schoolwork out of their backpacks and tuned everyone else out. But the majority of the students were circled up into small clusters, filling the space with conversation and laughter. Some students had their smartphones out, but plenty of students were device-free and fully engaged.

“We saw phones and everything start to go down because they’re having conversations,” Principal Tom Breuning said, pausing to reflect during his rounds.

Now in his 12th year leading Centennial High, plus a few years as assistant principal before, he’s seen how cellphones all too often supplant face-to-face conversations. He’s also well-attuned to the students, who were saying they were struggling to manage the stress of high expectations at school, alongside home and work responsibilities.

In an effort to give students time to reconnect and recharge during the school day, he helped implement a LEAP hour — which stands for Lunch, Energize, Achieve, Participate — at the start of the school year.

It’s essentially a “big kid recess,” he said. But it’s hardly a free-for-all on the playground. It’s a loosely structured opportunity for students to focus on their social and emotional needs, so they’re better equipped to tackle the academic piece.

Nearly 2,000 students attend Centennial High School, which is located in Circle Pines, a northern suburb of Minneapolis. It serves students from Circle Pines and the surrounding communities of Blaine, Centerville, Lexington and Lino Lakes. According to state data, 84 percent of the student population is white. 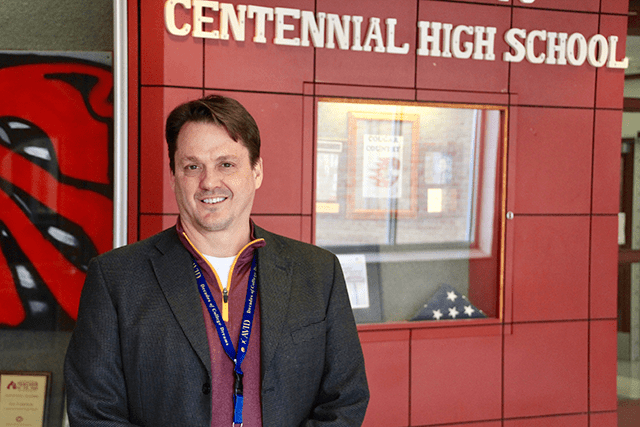 MinnPost photo by Erin Hinrichs
Principal Tom Breuning: “We saw phones and everything start to go down because they’re having conversations.”

“We have high academics. It’s what the community expects of us,” Breuning said, noting postsecondary education is the next step for most graduates.

But somewhere along the line, students coming through the high school started to communicate that they were feeling a bit overwhelmed.

“Kids were telling us, ‘We’re feeling stressed,’” he said. “But kids won’t stop taking AP courses, those opportunities. We knew we needed to do something. Our focus for LEAP is for social, emotional reasons.”

The philosophy they’ve adopted, Breuning said, is that if students are feeling connected and re-energized, their academics will benefit as well. 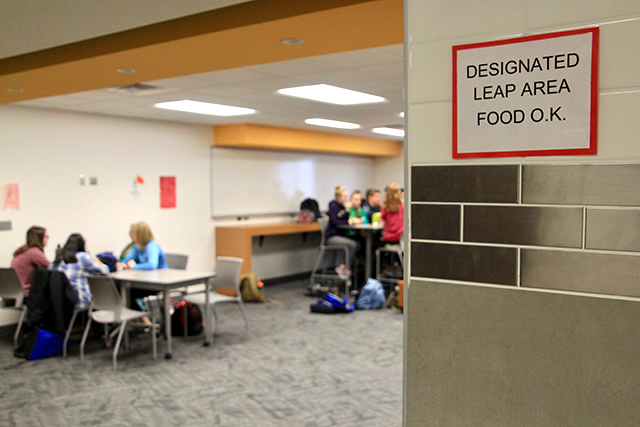 MinnPost photo by Erin Hinrichs
During LEAP hour — which happens every day after the first three 52-minute class periods — students can be found in these spaces doing schoolwork, eating and socializing.

His assistant principal brought the idea forth, after coming across an article about a similar program in a magazine for educators, back in the summer of 2014. That fall, the school lost two students to suicides and heard a resounding need for more social, emotional supports from students as they coped with the losses. Upon students’ request, they were able to offer some yoga classes, Breuning said, but the old schedule wasn’t very flexible.

As administration researched the concept of breaking up the school day with a lunch and wellness hour, they made site visits to Fridley and Superior, Wisconsin, to tour similar programs that were focused more on academics. At the end of the school year, they took a staff vote to create a taskforce — composed of educators, parents and students — to hammer out the details. By the end of the 2015-16 school year the idea was approved by the school board, and it was implemented at the start of this school year.

The timeline dovetailed nicely with scheduled school renovations that took place last summer. The school is now outfitted with booths and high-top tables outside of the cafeteria, for a more relaxed eating space. And a number of classrooms were converted to lounge study areas that are open to the hallway. Even hallways spaces are utilized as study areas with long study bars built along the wall.

From basketball to Harry Potter club

During LEAP hour — which happens every day after the first three 52-minute class periods — students can be found in these spaces doing schoolwork, eating and socializing. It’s not an open campus, meaning students can’t leave school grounds to grab lunch or hang out. But they’re granted a fair amount of autonomy during this period. They can choose to sit in the cafeteria for the full hour, if they want. Or they can get more individualized help on school work they’re struggling with or participate in a variety of preset activities called “connections” that are scattered throughout the building.

When the bell rings at 10:53, students have 10 minutes to transition to their first destination, where they must stay put for 20 minutes. When the bell rings again, signaling another 10-minute passing period, they have the option to relocate for the remainder of the LEAP hour.

For Yaachie Chuol, 15, that means eating lunch then heading to the gym, unless he needs help on an assignment.

“It relieves more of my stress and makes me feel happier during the end of the day,” he said, taking pause to reflect before rejoining friends for a game of pickup basketball. 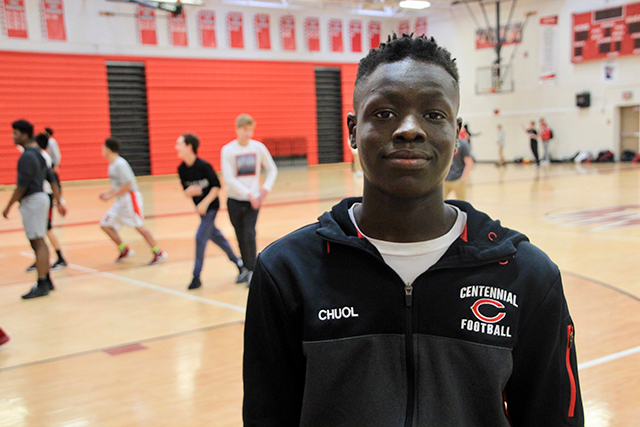 MinnPost photo by Erin Hinrichs
Yaachie Chuol: “It relieves more of my stress and makes me feel happier during the end of the day.”

Brett Skah, 17, who recently transferred from White Bear Lake, says he appreciates being able get help on schoolwork, when he needs it. But most days he spends the hour shooting hoops with friends.

“It makes it feel like the day restarts,” he said of the LEAP hour.

In the old library space, which was converted to a study area, high schoolers who serve as tutors for younger students through a program called Advancement Via Individual Determination (AVID) convene for a training session with teachers — something that normally would have had to take place after school.

In the career center, students socialize while they eat lunch. Some days they just relax and play cards, says Leslye Erzberger, the career center specialist. Other days she brings in college reps that students can talk to during this time.

Across the hall, another group of students gets ready to start a game of Harry Potter bingo. Here, the regulars have divvied themselves up into the various Harry Potter houses. They typically watch part of a movie from the series and are exploring the possibility of bringing a modified version of quidditch to the school.

Sitting next to her, Hannah Olson, 16, said it’s nice to have this break each day, to pursue a hobby and eat with friends from other grades without being rushed.

There are only a few rules: Staff don’t take attendance; remedial work can’t be made mandatory during this period; and coaches can’t require students to supplement their training by lifting weights or fitting in an extra choir practice. Also, every Wednesday, LEAP hour is reserved for an advisory period where staff check in with the students that they mentor all four years.

On all the other days, during LEAP period, staff participate as supervisors and connections advisers. So far, this arrangement appears to be yielding some promising results.

Studies show that students who are socially connected achieve higher academic outcomes. Based on initial feedback collected through a survey — which had about a 40 percent response rate — only 22 percent of students at Centennial High report experiencing above-average stress levels (compared to 60 percent prior to LEAP’s implementation); and 81 percent feel they have an adult in the school they can talk to, a figure that’s up from 57 percent prior.

“I anticipated dirty floors … and students trying to go outside,” she said. “It’s just amazing how respectful students are with it. They don’t want to lose it.” 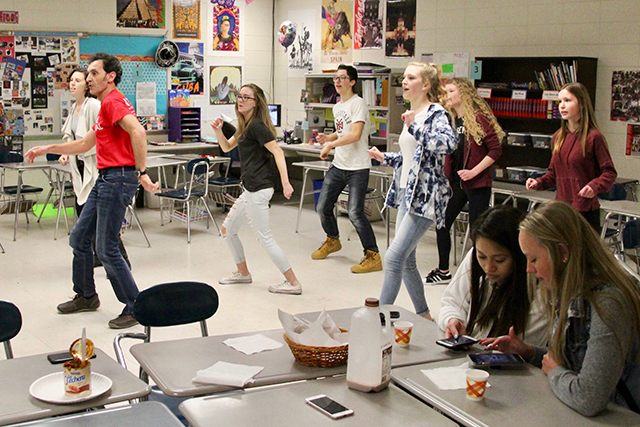 According to administration, the LEAP hour may be responsible for improved student outcomes as well. Comparing this year’s first semester statistics to first semester last year, behavior referrals are down from 412 to 340 and there are 50 fewer failing grades.

Breuning says he’s aiming for a better response rate when they survey students and staff at the end of the school year. But he’s already convinced they’re on to something worth keeping. This school year, he’s given tours to leadership from 10 other area schools that have shown an interest in their LEAP program. And every time he runs his litmus test — asking students how they’d feel if he decided to bring back the old schedule — he’s reassured they’ve made the right move.

On Friday, he presented the no-LEAP scenario to a group of self-identified “March madness” friends sitting inside a math classroom.