As legislators debate the gamut of education issues at the Capitol, a series of grass-roots conversations are taking place at schools and community centers in the surrounding suburbs that may set the groundwork for education policy work next session.

Gathered inside a cafeteria at Osseo Senior High Tuesday evening, students, parents, teachers, school administrators and community members from Rockford, Osseo and Brooklyn Center grappled with two deeply entrenched issues that no district has been able to claim total victory on: equity and integration.

After engaging in small-group discussions, they shared some of the common themes that had risen to the surface. These ranged from the need to invest in more personalized learning for students and the need to better address students’ unmet needs related to hunger, housing and emotional support to the need for more diverse makeup of teachers and school administration.

As pointed out by one former educator whose kids are now in the public school system, in many ways, these ideas are nothing new. Minnesota has long been recognized as one of the best states to be a student, unless you’re a student of color. That’s because, while the state touts some of the best academic success for students as a whole, it’s also home to some of the worst achievement gaps between students of color and their white peers.

But seasoned leaders in the education sector are saying this most recent effort to resolve these issues — which has been branded “Reimagine Minnesota” — is unlike anything they’ve experienced in the past. A coalition of more than 40 metro area superintendents is collecting community input through a series of meetings that continue through March. They’ll be distilling this information into a final report that they hope will be used to reboot and streamline efforts to create a more equitable, integrated public education system.

“This is the first time that I have seen — and I think all the superintendents that are involved would say the same — that we have had this comprehensive and broad of an effort to really go out to the community and the stakeholders and get their opinion,” said Scott Croonquist, executive director of the Association of Metro School Districts in Minnesota, which is funding the initiative. “The goal is to come back with a collective action plan from all of those communities. We’re hopeful that we are going to produce a report that is really meaningful, comprehensive, and will get us some new ideas and new solutions to bring forward to state policy makers.”

The Minneapolis and St. Paul public school districts are often the focal point when it comes to discussing issues of segregation and achievement gaps. And the Anoka-Hennepin district gets a fair amount of attention as well, as it’s the largest district in the state. But the pressure to adapt to a rapidly changing student body is equally acute in neighboring districts. For instance, the Osseo Area School district serves the third largest number of students of color, coming in third place after the Twin Cities districts. It recently made headlines when racial slurs were written inside a bathroom at Maple Grove Senior High School.

And, as is the case in many districts, academic outcomes in Osseo are often predictable by a student’s race, she added, with students of color lagging behind their white peers.

Maguire began working for the district as a teacher in 1985, at what’s now Brooklyn Middle School. At that time, she estimates her school served a student body that was only about 4 percent students of color. Today, slightly more than half of the district’s entire student body is nonwhite. That includes the third largest population of Asian and Pacific Islander students in the state.

In her seventh year as superintendent, she says she’s hopeful that these conversations taking place around the metro will raise awareness and actually move the dial forward.

In an open letter to the community in response to the incident at Maple Grove Senior High [PDF], Maguire outlined the racial equity work already under way in the district. That work includes providing a common language to talk about race, uncovering racial biases that impact relationships, and breaking down institutional barriers.

“While, in our district we’ve made some good gains … we are not yet impacting the daily lived experiences, in particular of students of color, every day in our schools,” she said in an interview Tuesday. “And that’s what we’re out to do — close achievement gaps … and [give] students experiences that are 100 percent supportive, nurturing, inclusive.” 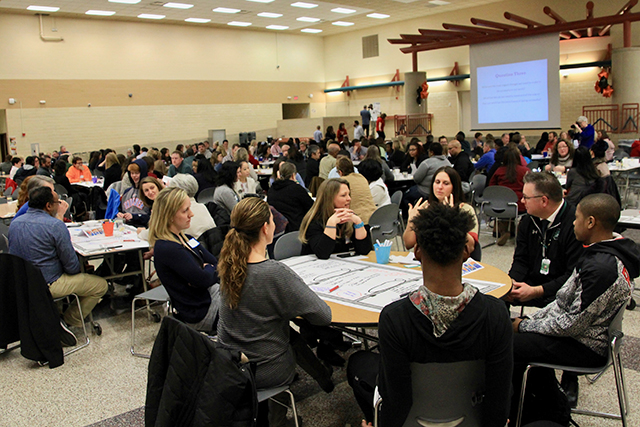 In Brooklyn Center, the sense of urgency to better serve a growing nonwhite student population is at the forefront of Superintendent Mark Bonine’s mind as well. In the 1990s, this district was largely a white, blue-collar district, he says. Today, it’s incredibly diverse, with a student body that’s only 20 percent white. In a fairly small district with less than 2,500 students, over a third are African-American. This group encompasses a lot of diversity as well, including a large population of Liberian students.

“We have kids from all over the world coming in weekly,” Bonine said in an interview.

When he came to lead the district four years ago, he helped re-evaluate the effectiveness of the district’s International Baccalaureate program. He found that only a small percentage of students were accessing rigorous coursework offered through the program and getting the diploma associated with it. With the changing student demographics in mind, he decided to exit the program and offer a STEAM program — that’s a focus on science, technology, engingeering and math, plus the arts — instead, with the expectation that it would serve students in a more equitable way.

“Instead of some kids being in some of the program, every single kid will get every program,” he said. “They will [all] actually participate in rigorous programming.”

Additionally, a cohort of teachers are currently undergoing training to become more culturally responsive to the needs of the students and families they serve. It’s the sort of thing that’s become a go-to for districts with a teacher core that’s primarily white that’s serving a diverse student body. But Bonine says the new, large-scale effort to streamline the strategies metro area districts employ to create a more equitable, integrated learning environment for all students is still necessary.

“Students are more mobile today, traveling from school to school and district to district,” he said.  “The question is: How do we give them the same experience and chance for the same high quality outcome? Instead of working as individual districts, how do we work together?”

In Rockford, Superintendent Paul Durand says they have more economic diversity than racial diversity. While there’s a growing Hispanic population in the eastern part of the district, he says the vast majority of the district’s students of color are voluntarily bused in from surrounding communities — about 200 in total — to attend its elementary arts magnet program and middle school STEM program, both of which are part of the Northwest Suburban Integration School District.

In the future, however, diversity may no longer be confined to the district’s magnet programs. Reflecting on his experience as an associate principal in Brooklyn Center back when it was just beginning to serve a more diverse student population, Durand said, “That’s the same thing I’m seeing in Rockford today … the only difference is that was 25 years ago.”

Spurred by a lawsuit

Despite efforts that individual districts have been making to support integration and equity, change isn’t happening fast enough. The Reimagine Minnesota initiative was spurred by a lawsuit against the state that’s centered on these two issues.

In the fall of 2015, seven families whose children attend Minneapolis and St. Paul Public Schools brought the case forward. In it, they allege that state policies have allowed for a higher concentration of students of color and poor students in Twin Cities public schools — in effect, creating a segregated school system that puts minority students at a distinct educational disadvantage. In order to remedy the resulting achievement gap, the lawsuit called for a metro-wide integration plan.

While not legally bound to the case, metro area superintendents have seemingly united in response, saying these conversations that needed to happen, regardless. And once they pull together a report, based off all the feedback they collect from students, teachers, administrators and community members, they’re hopeful it will be used in both the short and long terms.

“I think there’s a lot of hope that the report would go to state policymakers and would be helpful in crafting solutions to the issues that are raised in the lawsuit,” Croonquist said.

While no one’s entirely sure what that report will look like at this point, facilitators of the Reimagining Minnesota conversations say they can already identify a number of common priorities that have been voiced, especially by student participants. That list includes the need to invest more in building strong student-teacher relationships, increasing diversity within the teaching staff, creating more inclusive school environments where all students feel safe to be who they are, and adopting curriculum that dives deeper into the cultures and histories of nonwhite students.

Integration, in these conversations, is taking on a much broader definition than simply putting white students and students of color in the same classroom.

After participants shared some of the main ideas and experiences they’d taken away from their groups’ conversations, an Osseo parent challenged all of the white people in the room to reconcile any sense of guilt they have when recognizing their own history — which encompasses stealing land from Native Americans and enslaving African Americans — so everyone can move forward together.

“It starts with accepting who we are, remembering it, sharing that history with all of our young people and moving forward so we really can change. After we leave here, what are you going to do to make the first step? The talking needs to stop and the walking needs to start,” Alida Abdullah said, triggering a round of applause.