With the title of 2014 Minnesota Teacher of the Year already under his belt, Tom Rademacher has recently stumbled into a new bit of celebrity. The seventh-grade English teacher has written an unfiltered, introspective — and thoroughly entertaining — book about his teaching experiences, titled, “It Won’t Be Easy: An Exceedingly Honest (and Slightly Unprofessional) Love Letter to Teaching.”

His essays chronicle everything from regrets he has about how he disciplined students or engaged in power struggles in the classroom to moments when his students articulated thoughts on race and privilege more powerfully than he could have ever imagined.

City Pages recently ran a cover story featuring excerpts from his book. That same day, he says, he got a call from Kare11 to rush over for an interview with Jana Shortal. He squeezed it into his prep hour — student teacher in tow — and continued on with the daily business of teaching.

Then, on Monday — his first day of the coveted spring break — he sat down at a coffee shop in Northeast Minneapolis for a Q&A with MinnPost to talk some more about his book and what he’s learned along the way.

When he’s not busy sleeping in past 5:30 a.m. or napping, during the remainder of the week, he said, he’ll be tackling all of the book-related tasks that have fallen victim to procrastination. The book is coming out April 25 from the University of Minnesota Press. Two launch events are scheduled for April 24 at Surly Brewing (which has already sold out) and May 9 at Magers & Quinn Booksellers.

MinnPost: Tell us a little bit about the book.

Tom Rademacher: In general, it’s the book I wish I had when I started teaching. Unlike a lot of books about teaching, it’s not a prescription for how to do it right. It’s more about: Here are the struggles I’ve had and things I’ve figured out along the way, the important questions I’ve learned to ask myself, and then a ton of stories — about where I messed up, things that went well, things that were ridiculous, things that were funny and things that were kind of crushing and really challenging. It’s a lot more conversational than a lot of books that are out there.

MP: Who’s your target audience? And what do you hope they get out of reading your book?

TR: My hope is that it appeals definitely to people who are teachers, but also anyone who’s just kind of interested in what it’s like at school from an adult point of view. It started as I love talking to and training new teachers. I started to realize, while I had maybe my third or fourth [student] teacher in a row, that I often told the same stories over and over again to every one of them. So those are like the core stories and the core lessons in the book. In my mind, they’re targeted to new teachers or teachers who maybe need to feel refreshed about teaching. Though I tell a lot of stories about how difficult it is, I definitely don’t want to turn people away from teaching. I just think it would be helpful to walk in with maybe eyes a little wider open about there’s a reason why it’s hard, there’s a reason why everyone who does it thinks it’s hard. Sometimes it’s your fault and something you need to change. Sometimes it’s just a matter of it’s never going to be an easy job to be in front of 30 kids and trying to point them all in the same direction.

MP: At what point did you know that you’d be chronicling your teaching experiences?

MP: Why do you think that’s the case?

TR: I think teachers, in general, struggle with admitting that they’ve messed up. They struggle with being vulnerable, and letting people into what they do all day. And I think it’s because teachers often feel on the defensive anyway. And it’s hard. It’s hard to admit, when you’ve got kids that you’re responsible for, that you sometimes aren’t the best teacher you could be for them, that you didn’t do things perfect. So that’s one piece of it. The other is, honestly, just time. The more I write the less I do that isn’t related to teaching. So, in process of writing a book and getting ready to publish a book, I got rid of silly things like friends, and sleeping. 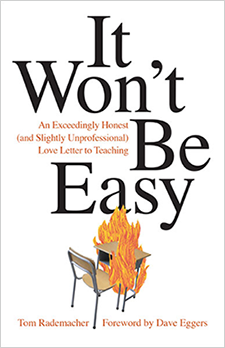 MP: Did you have any initial reservations, or run into any red tape?

TR: That’s why I don’t use real names of students. And a lot of the stories in the book are a few years old now, so it’s kids that are out of school anyway. I think one thing that helps is that I honestly feel very positively about my students. So when I write, though I might be writing some challenging thing about education or about the way the schools are run, I’m not out there trashing my kids. That’s not to stay out of trouble. That’s honestly the way I see things. Somewhere along the way I just calculated that if I’m going to write, I’m going to write honestly and if people are going to be upset at me for writing honestly, I guess I’ll have to tackle that when I get to it. So far, though, generally, the reaction has been positive — or utterly neutral. My kids just made fun of me for being on a magazine. There’s nothing you can do as an old lame dude to get credibility from seventh-graders — which is just how I want it.

MP: Do you feel like you’re filling a different space for teacher voice?

TR: Winning Teacher of the Year was my first “like it or not, I’m going to get noticed,” and obviously I love it — I like attention — so it’s fine. But I went into that year and I was both a member of reform groups and super active in my union and state union, so I saw myself as ‘Hey, I could kind of build some bridges between these two groups.’ That’s just not how it worked out, really unfortunately. I’m not really super involved in either of those things anymore. In the end, it just wasn’t a battle I was interested in fighting. It was a battle that was increasingly about the adults involved and not the kids. So when I found myself in arguments that involved massive egos — mine being one of them — it was a lot of fighting back and forth and we just weren’t talking about kids anymore. I realized, again, I have about 13 minutes of free time a day, how do I want to spend it? I’d rather spend it writing about my truth and letting it fall where it needs to. I guess I’m kind of a free agent now and I like that a lot better than worrying about who I belong to.

MP: Has the process of writing this book changed your relationship with teaching?

TR: Yes, a thousand percent. I think the level of reflection that goes into even a small amount of writing about your teaching is huge. Honestly, I think teaching comes at you at a million miles an hour all day long. So to force yourself to stop and think about why you made a decision you made or why things went the way they went was tremendously helpful for me as a teacher. Though I’m egotistical about everything in my life, I’m not about my teaching. And I probably was for a long time. But when you spend two years writing about all the times you screwed up, it’s really hard to hold out that you’re truly fantastic all the time. I think it also helps me, when I screw up now, to remember that’s part of the process. And doing it wrong doesn’t mean you can’t apologize and move on and get better the next time. That process of it, I think, it’s become part of my normal teaching practice because I started writing about teaching.

TR: I really like writing where I’m at. I promised myself I would never write about teaching without teaching. I’ll keep doing that as long as they let me. And even while I’m working on book stuff and writing essays, more often than not my brain’s on my classroom and my kids there and how to get better at teaching. It’s funny because the career path for a teacher is pretty laid out. More often than not, you’ll have the same job title 30 years after your first day of teaching. So it’s odd, I think, knowing I have this book coming out and not knowing what that might do. But it’s not like I can get a promotion from it. Which is great. I get to be a teacher still. I’ll keep teaching, and somehow handle the scheduling of it. My wife has a book that comes out like three weeks after mine, so we’re really good at scheduling. She’s a sex therapist. Hers is a legit professional book — research and all sorts of awesome stuff. It’s about how to talk about sexual pleasure in clinical settings. In my writing, I don’t not swear. So our family joke has been that she’s writing a really professional book about sex and I’m writing a dirty book about teaching.

MP: Anything else that you want to add?

TR: The subtitle of the book mentions it’s a love letter to teaching, and so much of it — my ability to write about teaching, and my growth as a teacher and me being somewhat of a better person — so much of that has to do with in 10 years I’ve had a thousand kids, a thousand people in my life who have been willing to let me speak with them, listen to me, and tell me things about themselves. That’s really where the love letter part comes from. It’s really about the kids and the coworkers I’ve had along the way. I don’t know, it’s the most beautiful thing I’ve ever experienced, even on all the days I hate it, which is a lot.