Minnesota has long been home to school tornado drills. And in response to school shootings across the country, school lockdown drills have become commonplace as well.

Now, following President Donald Trump’s policy directives regarding immigration, Hiawatha Academies — a charter school network in south Minneapolis that serves a student population that’s 99 percent students of color and 64 percent English Language Learners — has added another “worst-case-scenario” training for students: What to do in the event of a federal Immigration and Customs Enforcement (ICE) raid or the detention of a family member.

“There are examples of DACA students being detained and folks who are not criminal,” said Hiawatha’s senior director of community engagement, Ambar Hanson. “When you start to hear more and more of that information, it’s important for us to make sure we continue to build a safe place for our scholars.”

A show of solidarity

The Hiawatha schools student population is roughly 80 percent Latino, and those who work at the school were concerned about anti-immigrant rhetoric long before the Trump administration unveiled its immigration policies, which have included a directive allowing federal officials to be more aggressive in finding, arresting and deporting those in the country illegally, regardless of whether they have committed serious crimes.

“The platform that Trump has run on created anxiety much earlier than the election,” said Ryan Williams-Virden, a dean of students and social studies teacher at the network’s high school. “The policies that were reported in his platform and agenda targeted communities that Hiawatha serves. Anxiety spiked, for sure.”

Third-grade teacher Charise Powell says those emotions were apparent in her classroom as well. Recognizing the fact that her students needed a place to voice their concerns and fears about how more stringent immigration policies might impact their families, she’s set aside time each day for these conversations to take place. She says her students come to school consumed by thoughts about having to watch out for ICE raids or worried about their families being broken up.

“Those are the things they’re thinking about every single day,” she said. “I know that learning isn’t going to get done if the space for those conversations isn’t provided for them.”

With 1,064 K-12 students, Hiawatha has been nationally recognized for its success in closing the opportunity gap, which educators attribute to the strong relationships teachers build with students and their parents. So it came as no surprise that the network’s board of directors adopted a safe haven resolution on January 18, declaring the school network a safe space for “families threatened by immigration enforcement or discrimination.”

They also hosted two community forums: one about a week after Election Day and another after the presidential inauguration. At both events, amid food and music, a panel of community members shared their experiences and immigration attorneys fielded questions and concerns. “If we don’t create a culture of safety for our kids, they won’t be able to focus on building relationships in their classrooms … and learning,” Hanson said. “We really value them as human beings and our vision is about disrupting the status quo and systemic inequities. We wouldn’t be fulfilling our mission if we didn’t step up and let our community know that this is a safe place for everyone.”

These sorts of efforts are not unique to Hiawatha Academies. (Full disclosure: Hiawatha Academies executive director is Eli Kramer, the son of MinnPost founders and board members Joel and Laurie Kramer, who had no involvement in, or any knowledge of, this story before it was published.) The Minneapolis Public School District has also adopted a safe haven resolution and hosted community meetings with immigration attorneys. St. Paul Public Schools followed suit as well, adopting a similar resolution.

But Hanson says educators at Hiawatha Academies felt there was an urgent need to do more for students who could be either directly or indirectly impacted by the federal crackdown on immigration. “Legally, ICE cannot enter schools,” she said. “But because we know that things are changing so drastically and rapidly, we have created a safety plan, in the event that ICE decides to come to a school. We have also created a safety plan in the event that we learn that any of our children’s families are being detained while the children are at school.”

To make sure all office staff and teachers the schools are well equipped to handle a request for student information from an ICE agent, Hanson says they’ve been briefed on their rights to protect student data. That entails things like making sure no one hands over any student files without receiving a specific warrant.

To prepare students for an encounter with ICE — a scenario that’s more likely to take place out in the community — teachers are handing out “know your rights” cards in both English and Spanish that they can take home to share with their parents. In the classroom, they’re finding ways to review students’ rights in an age-appropriate way, whether it’s facilitating a classroom discussion or offering an outlet for students through an art or writing project.

“We don’t want to create more fear,” Hanson said.”But we do want to acknowledge that students are aware of what’s happening around them.” 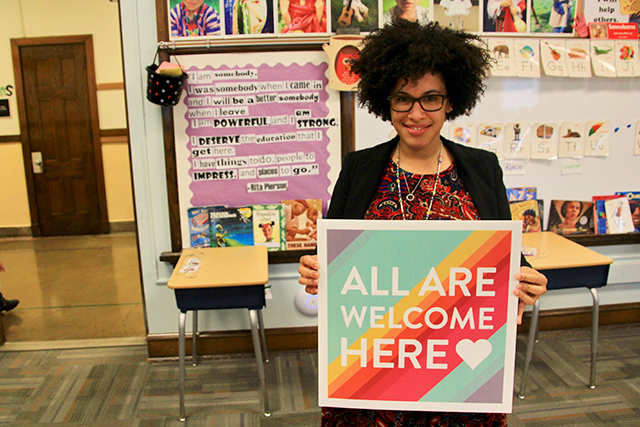 MinnPost photo by Erin Hinrichs
Third grade teacher Charise Powell says her students come to school consumed by thoughts like: Am I going to be adopted? Am I going to go home and my family won’t be there? Do I have to watch out for ICE?

In Powell’s classroom of 24 students, many of whom she taught last year as well, this has entailed making sure her students know what an ICE vehicle looks like, and what “adults in power” look like. Powell says she’s also big on assuring her third graders that it’s the job of adults in the building to take action and keep them safe — not because they have to, but because they care about their students and want to support them.

At the high-school level, Williams-Virden says that when teachers heard that ICE agents were in the area, they began escorting students who use public transportation to and from the public bus stop.

Inside the classroom, he says, they’re constantly making connections between current events and students’ lives and legal rights. He’s already seen ICE tear families apart, forcing students to visit detention centers after school if they want to see their loved ones. He’s also consoled students who, assuming the worst case scenario, have broken down in tears after not being able to get ahold of family members by phone while at school.

“[They’re] questioning: Why is this even happening?” he said. “Those things create anxiety and trauma that,  every day in school, we have to navigate.”

‘We want to let them know we’re here for them’

Hiawatha Academies is looking to put another last-resort safeguard in place. A number of teachers have volunteered to become legal guardians of their students in the event that their parents are detained or deported and cannot care for them. “That’s obviously a decision parents get to make, and we respect that. But we want to let them know that we’re here for them,” Hanson said.

It may only be a small piece of the school network’s safety plan, but it’s a proactive step made possible through the relationships teachers pride themselves on building with students and parents. “Students have said this before: they know that I genuinely care for them, and not just because I’m a teacher,” Powell said. “Those are my kids.”

Williams-Virden feels the same way about assuming this new role, noting he wants to be supportive of his students in any way he can. At the high school level, teachers serve as advisors for the same cohort of students for four years, so that foundation of trust and respect is already in place.

“We’re the one who help navigate and build relationships with not just students, but families,” he said. “That’s a bond that’s really important and really special. If definitely makes it easier to say I’m gonna stand up and be there for you no matter what.”