Chronic absence — missing more than 10 percent of the days in a school year for any reason — is a big problem in Minnesota schools, affecting at least one in six Minnesota students, according to data from the Minnesota Department of Education.

But it affects one group of students more than any other.

Statewide, 38 percent of American Indian students missed 10 percent or more days of school last year — the highest rate of any racial or ethnic group. Missing that much school, research has found, is enough to hurt kids’ academic proficiency and their chances of graduating high school.

Chronic absenteeism by race/ethnicity in Minnesota, 2015-16
Students of most minority groups were chronically absent at higher rates than white students in Minnesota last year.
Source: Minnesota Department of Education

American Indian students also have the lowest high school graduation rates of any racial or ethnic group in the state, at 53 percent graduating in four years, compared to the statewide average of 82 percent.

It’s not just in Minnesota where this is the case: The first federal report on chronic absenteeism, out last year, found that 23 percent of American Indian students were chronically absent (based on a 15 or more missed day threshold), compared to about 14 percent of all students.

Experts say chronic absence usually goes hand in hand with poverty: Often it’s homelessness or taking care of a sibling or lack of transportation that prevents a student from going to school.

That may partly explain the high rates of chronic absence: About a third of American Indian people in Minnesota are living in poverty, according to Census figures, compared to 11.3 percent of the overall state population. But there are other factors that drive higher rates of absence from school among American Indian students.

Absence from school is often generational, said Luann Frazer, a member of the White Earth Nation and the director of American Indian Education programs at Cass Lake-Bena Schools, located on the Leech Lake Reservation, near Bemidji. Frazer grew up attending Cass Lake-Bena schools in the late-’70s. “We’d come to school on a Monday and three to four of my classmates wouldn’t show up ever again,” she said. 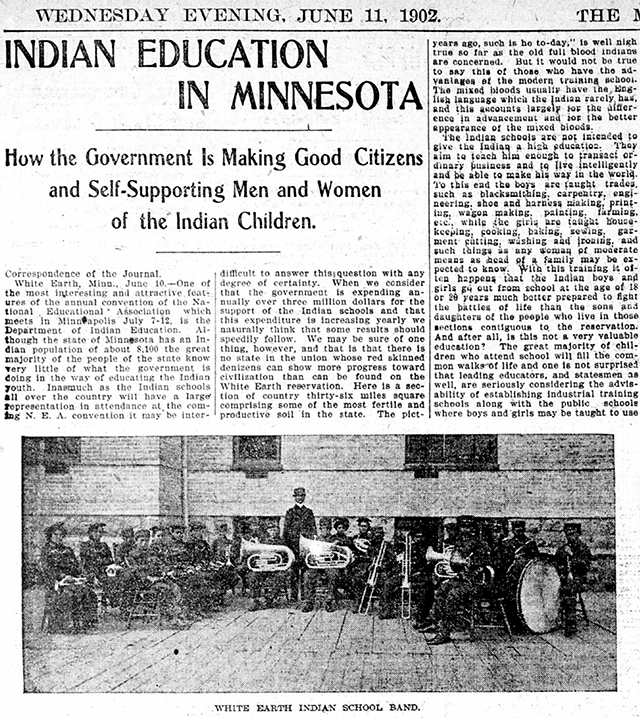 Library of Congress
A detail of the June 11, 1902, edition of the Minneapolis Journal featuring an article about Indian education in Minnesota.

Many in the community grew up with negative experiences in the school system — even then — that carry forward as they raise their own children in the schools.

“Back in those days, it was kind of rough. Teachers still could hit you with rulers and shove you against the lockers,” Frazer said. “I think a lot of that happened, in fact, I know it did.”

The relationship between schools and tribal members today remains tinged by the long history of federal policies aimed at assimilating American Indians into broader American society, measures that sowed a legacy of mistrust of institutions among many members of tribal communities.

From the mid 1800s through the 1970s, American Indian children as young as 4 were taken from their families and sent to boarding schools, whose purpose was to mold the children to fit into American society.

But it happened here, too. At one point, Minnesota had 16 Indian boarding schools, which pupils from all 11 of the state’s reservations attended.

At most boarding schools, “On arrival, they were ‘sanitized’; that is, bathed, sometimes by a staff member, and deloused, whether they had lice or not. Their clothing was thrown away or stored, and they were outfitted with a school uniform,” wrote Linda LeGarde Grover, associate professor of American Indian studies at the University of Minnesota Duluth and a member of the Bois Forte Band of the Minnesota Chippewa Tribe in an article in Minnesota History magazine.  “Boys were not allowed to wear their hair long, and girls were given the hairstyles of non-Indian schoolgirls.” Students were forced to learn and speak English. 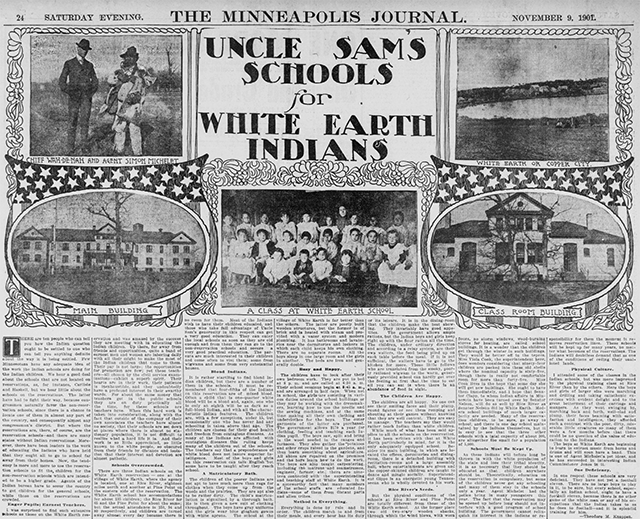 Library of Congress
The Nov. 9, 1901 edition of the Minneapolis Journal featuring an article on the White Earth Indian school.

Boys were taught to do manual labor, and girls were taught to do domestic work. Touted as a positive for American Indian children in newspapers at the time, the reality was often different. There was mental and physical abuse, which reportedly resulted in students' deaths.

The boarding schools began closing in the 1930s, but policies that attempted to assimilate American Indians continued, Grover said.

Termination laws, policies whose goal was to eliminate the sovereignty of tribes, were in place from the mid-’40s to the mid-’60s. Then, “The federal adoption program, sterilization, relocation programs — those continued the attack on families,” Grover said.

Students today are being raised by parents and grandparents who lived this history. And Minnesota educators say this past often makes parents and children in American Indian communities more wary of the education system. Now, they are working to heal the wounds inflicted on these communities in the hopes of helping students find success in school.

Today, things are much better than they were at Cass Lake-Bena schools, Frazer said. She and her staff are working to build trust, focusing on the positive. “We work very very hard every single day,” she said, building relationships with students and parents, making calls home — even hand-delivering letters when students miss a lot of school.

To foster good relationships, the tribe and local schools have formed a Leech Lake truancy collaborative, which meets regularly to talk about attendance across the reservation, share ideas and discuss what’s working in getting kids to school. For students who are members of the tribe (the majority of students), truancy matters fall to the tribe rather than the county. The tribe tends to focus on more restorative remedies than punitive ones, Frazer said.

Frazer and her staff have also found that building relationships is extremely important in getting kids in their community to come to school. “Sometimes if a kid knows that somebody here is really worried about them or cares for them, sometimes that’s all it takes,” she said.

Other times, it’s offering programs: sports, dance troupes, gifted and talented programs, and other activities can also be instrumental in getting kids to school. “We want to draw kids in, we want kids to feel good when they’re here,” Frazer said.

Some of those efforts are likely paying off, Frazer said. Graduation rates in the district have increased, from 41 percent in 2014 to 51 percent last year.

Attendance has also been an issue at Red Lake Public School District. Last year, 58 percent of students in the district, located within the Red Lake Nation in the north-central part of the state, were chronically absent, according to data from the MDE.

But thanks in part to state Indian education funding, the district has been able to fund collaborations with the community to increase attendance, said district superintendent Anne Lundquist.

The district has also hired four full-time home-school liaisons to build relationships with families, helped fund a case worker salary at family and children’s services and a school resource officer. The district and the tribe’s social services agency have also partnered to ensure families who are eligible only receive full benefits stipends if they can show that their kids are attending school.

In the last year, attendance has improved by about 10 percent, Lundquist said.

Balancing the traditions of American Indian families and the schools can be a challenge, said Anna Ross, Minneapolis Public Schools' director of Indian Education who is a member of the Turtle Mountain Ojibwe. 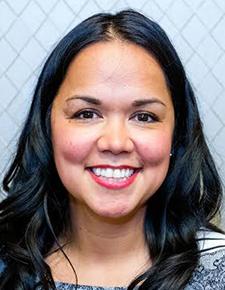 Traditionally, “Your community and your families were your teachers, that’s priority,” she said. A lot of times, kids miss school to take care of a younger sibling who’s sick, or to attend a ceremony on a reservation.

“That’s your culture and your values and your traditions,” Ross said. But school is important, too.

Nearly half of American Indian students at Minneapolis Public Schools missed 10 percent or more days of the school year last year — rates higher than any other racial or ethnic group in the diverse, urban district, where an average of 19 percent of students are chronically absent.

Improving student attendance is one of the specific goals of a memorandum of agreement between Minneapolis Public Schools and the Metropolitan Urban Indian Directors, first signed in 2006 to build bridges between the school district and the community to improve American Indian student achievement, and re-upped since. To that end, the district, the district has been hosting achievement and attendance recognition celebrations.

Last year, the district hired a social worker to specifically work on attendance among American Indian students through building relationships with families and students, Ross said.

And this year, the district initiated a new kind of truancy meeting in partnership with the county.

When schools report any students absent to Hennepin County after six days of unexcused absences, the county holds meetings with parents to explain the importance of school attendance and connect families to any services they need.

To some families in the American Indian community, these meetings had been perceived as disciplinary, Ross said — many families wouldn’t go, though discipline wasn't their intent. 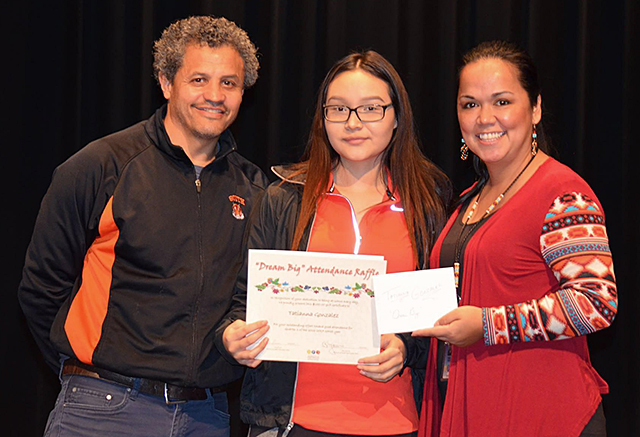 Now, in addition to county and American Indian Education staff being present for these meetings with members of the American Indian community, so are tribal elders. Before the meeting, participants are given the opportunity to smudge, a ritual practiced by Ojibwe and other tribes that involves burning one of four medicines, including sweetgrass and sage. “The smoke from that is meant to kind of cleanse your mind and cleanse your spirit — it’s basically a mental bath, if you will, to put your mind in a good place, to be open to new things,” Ross said.

This has changed the dynamic in these meetings, helping families to be more open, Ross said, and the feedback so far has been overwhelmingly positive.

Not an overnight fix

Changing the relationship between American Indian communities and schools can’t happen overnight, Grover said, but she sees progress being made.

Her grandchildren attend Duluth Public Schools, where the American Indian Parent Advisory Committee has worked to bring programming into the district that acknowledges and celebrates American Indian traditions, she said.

“I know the experiences of the past, they are difficult, but I believe that they actually can be used to strengthen the fabric of our existence,” Grover said. “What the generations before us had to go through … it’s important to remember them, not to weaken us but to actually strengthen us. They are part of what we are and they are what made us what we are today.”