Prompted by the demands of demonstrators who had packed into the boardroom at district headquarters Tuesday evening, the Minneapolis Public Schools board ended up voting on two items that weren’t on the original meeting agenda.

One had to do with revisiting existing district policies — and enforcement of these policies — on withholding students’ access to hot lunch and recess as a behavior consequence. The other involved overriding district administration to reinstate seven district employees who said they were wrongfully pushed out after advocating for students. After clearing legal concerns with the district’s general counsel, Amy Moore, the board passed a resolution to rehire or to add a formal letter recommending rehire to their employee files, so they could seek out other options in the district.

For Michelle Barnes, these two demands were deeply intertwined. Since August, she had been working as a special education assistant at the River Bend Education Center, a self-contained K-8 school serving students with emotional, behavioral and mental health needs. But she hit an unexpected road block a couple of weeks ago that left her without a job.

“I was wrongfully terminated for insubordination as a result of speaking out against a food punishment practice at River Bend,” she said in an interview before the board meeting last night.

Isolation and a cold lunch

Teachers were denying a hot lunch to students who had allegedly misbehaved throughout the day, she said. Instead, the students were spending their lunch period in an isolated room and were given a cold lunch. Barnes flagged the practice as “retraumatizing” for these youth, many of whom come from food-insecure home environments. But when she did that, she claims, her superiors handed her a termination letter and gave her the option to resign. Uninformed, she agreed to resign about a week after speaking out, effectively abdicating many union protections and avenues for appealing the breakup.

She then connected with a union group called the Social Justice Education Movement, which was mobilizing to put pressure on district leadership to re-evaluate how they hire, fire and retain teachers of color — especially those who felt their push-out was in retaliation for advocating for children.

“On a macro level, these unethical firing practices are extremely contradictory to the district’s commitment to diversity,” Barnes said, before rallying outside of the boardroom with those who had come out in a show of solidarity. Barnes was one of seven educators who’d found themselves in a similar situation. The group included one other former River Bend employee, one former educator at Jenny Lind Elementary School, an ESL teacher at Anderson United Community School, and three educators formerly at Hmong International Academy.

When the crowd tried filing into the room, they were met with resistance at the doors, because the room had already reached capacity — 148, according to a plaque posted inside the room. After a tense standoff — punctuated by demands of “Let them in!” — the demonstrators spilled into the room, cramming into all the open spaces. Ten minutes after the meeting was scheduled to start, the board members and Superintendent Ed Graff took their seats.

This marked the first public confrontation during Graff’s tenure, which began last July. In the past, protesters had shut down the adoption of a controversial reading curriculum. More recently, protesters shut down a board meeting that effectively forced the board to take another crack at the failed superintendent search, a process that then included a great deal of community input. 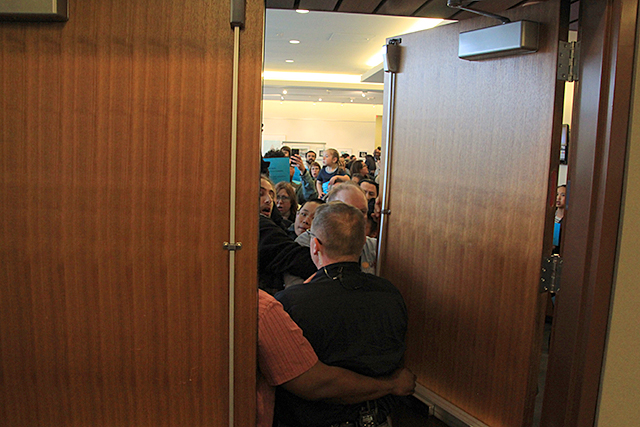 MinnPost photo by Erin Hinrichs
Demonstrators forcing their way into the Minneapolis school board meeting Tuesday evening after staff had tried keeping the room at capacity.

Offering a few opening remarks before the public comment session, Graff acknowledged that the district is working through some tough staffing decisions right now, in preparation for the $28 million budget deficit projected for next school year.

While managing class sizes remains a priority, he said, there have been reductions in staff at both district headquarter and at schools. “We are being incredibly conscientious in our approach,” he said.

While his address was interrupted by some hissing, he assured everyone that he had already asked his chief of human resources to conduct the next annual organization-wide review “with a specific focus on our rehiring decisions for probationary employees and our discipline processes and practices and the impact these systems have on our staff, in particular on members of color.”

Intent aside, his remarks did little to soothe the tension that had built up in the room.

David Boehnke, one of the lead organizers with the Social Justice Education Movement, took to the podium after a language arts teacher and a social worker had testified.

“This is not budget-related. They were not excessed. They were pushed out,” Boehnke said. “Any advocating in this district is extremely dangerous.”

Before the board was able to deliberate and take action, they listened to nearly two hours of public testimony. The steady stream of speakers included representation from a number of groups, all raising concerns with just how serious the district is about diversifying its educator workforce.

Amber Jones, an organizer for Neighborhoods Organizing for Change (NOC) said she’d been hearing for a while now about employees of color who take a stand for students being pushed out. “We literally have to beg these staff to be committed to these kids because of all the things they go through in this district,” she said of staff of color. “Do better. Stop the attack. Stop the push-out of teachers of color.” 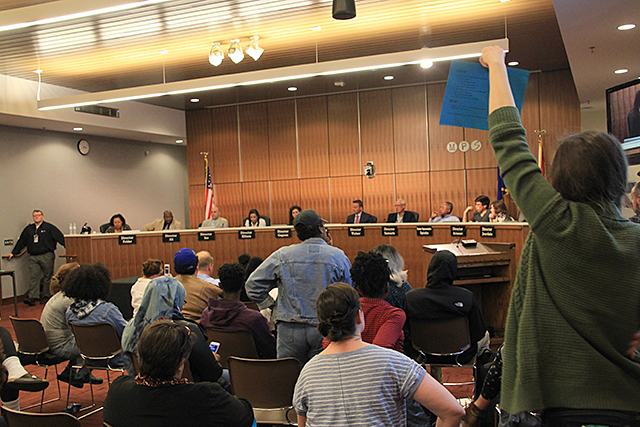 MinnPost photo by Erin Hinrichs
Before the board was able to deliberate and take action, they listened to nearly two hours of public testimony.

Roseville teacher Maria Le — a 2016 state Teacher of the Year finalist, who formerly worked in the Minneapolis district — said she was there representing the state’s teacher’s union and to address the “alarming rate of nonrenewals of teachers of color in Minneapolis.”

While the board has not yet been presented with district-specific hiring and firing data, state data shows that teachers of color only make up about 15 percent of the teacher corps in the district, yet the student body is 66 percent students of color. There’s widespread consensus among district leadership and state education leadership and policymakers that this disparity needs to be addressed in order to help close the achievement gap. Giving youth the opportunity to learn from adults that they can better relate to  — either because they share a cultural background or a race-based experience, for instance — has been identified as a pillar of this work.

Le asserted: “If Minneapolis is responsible for lowering this extremely low percentage, then you must accept you are not supporting your students of color and have a district that, at its heart, is systemically racist.” 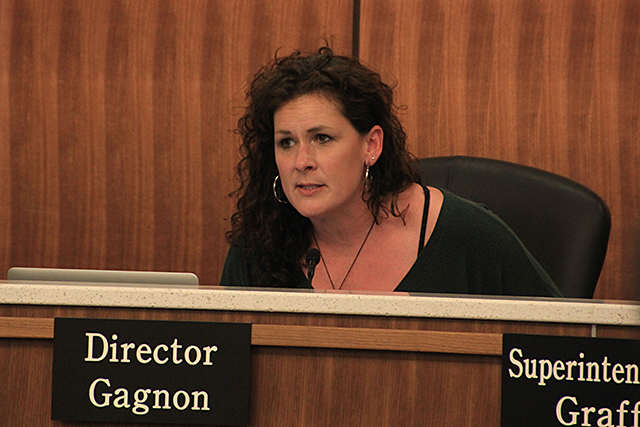 MinnPost photo by Erin Hinrichs
Board Chair Rebecca Gagnon navigated an unconventional board discussion, interrupted with questions, jeers and demands from those in attendance.

By that point, quite literally, the room had begun to heat up. Looking to transition into board discussion, Board Chair Rebecca Gagnon said “it’s really warm in here” and proceeded to navigate a rather unconventional board discussion, interrupted with questions, jeers and demands from those in attendance.

Board Member Kerry Jo Felder abstained from voting on the personnel issue, citing a conflict of interest because of her work for the labor movement. But she still spoke out in support of those who had shown up to demonstrate. She requested that her colleagues reconsider what exit interviews look like. “This is something we have to sit down with and talk about. And I’d really like the people of color on this board to take the lead on this,” she said, triggering a round of applause.

Don Samuels was the only other board member to abstain from voting on the resolution to reverse the resignation status of all seven employees. He acknowledged he has some serious concerns after listening to such passionate testimony. But he wasn’t keen on reacting to political pressures. 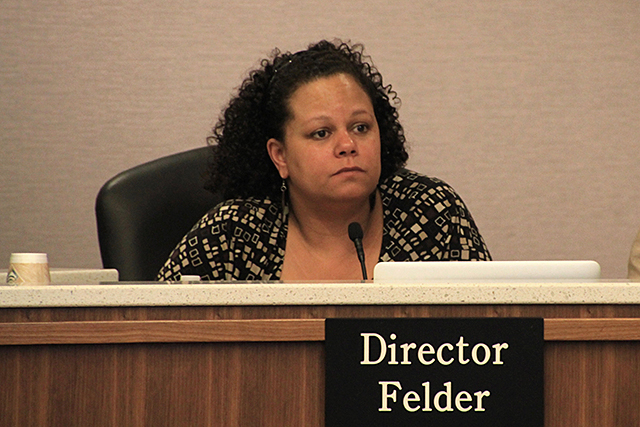 MinnPost photo by Erin Hinrichs
Board Member Kerry Jo Felder abstained from voting on the personnel issue, citing a conflict of interest because of her work for the labor movement.

“I am totally  uncomfortable with making a personnel decision at a board meeting,” he said. “I think this requires a deeper dive and hearing both sides.”

Vice Chair Kim Ellison also expressed concern, initially, with addressing the issue “piecemeal.” “We’ve discussed some of the biases that exist within our hiring and firing,” she said, alluding to leadership conversations that have involved Graff. “This is a symptom of this.”

Prior to calling for a final vote, Gagnon expressed her concern about setting a precedent that this is the way the board is willing to conduct business. But, in the end, she empathized with the demonstrators. “I also agree that sometimes, like with Reading Horizons, a process has to be radically disrupted,” she said.

Outside of the boardroom, where the demonstrators had flocked to celebrate their victory, Michelle Wiese, president of the Minneapolis teacher’s union, indicated the fight is not yet over.

“This district does disproportionately discipline children of color and dismiss educators of color,” she said. “We need to find the root cause of that and root it out.”