Ask someone outside of Minnesota what they know about St. Cloud and, chances are, they’d know it’s home to a large pocket of Somali residents. The cultural mashup taking place here — in a historically white community that’s had an influx of East African immigrants in the last decade or so — hasn’t always been peaceful.

For instance, the This American Life radio show recently profiled the racial tensions that have come to define the community. And just this past fall, news of an FBI investigation into a knife assault by a 20-year-old Somali-American male at the Crossroads Center made the New York Times.

But plenty of advocates for unity and cross-cultural understanding have emerged over the years. Those involved in a local charter school called STRIDE Academy count themselves among those working toward a new sense of community, one that embraces its newfound cultural diversity as an asset. School leaders feel they have a school model that’s done just that. Four years ago, the school didn’t serve any English Language Learners (ELL), says Natalie Ringsmuth, a parent who joined the school board last school year. It’s currently serving 141 ELL students — 20 percent of the student body.

Today, however, STRIDE is facing closure. While school leaders say they embraced the school’s newfound diversity, they struggled to adapt to the academic needs of their changing student population. The school went from being in the top 15 percent of all Title 1 schools in the state, in terms of students’ academic performance, to being in the bottom quarter of Title 1 schools.

Friends of Education — the school’s authorizer, an entity approved by the state Department of Education to oversee charter school financial management and academic performance — has decided the school’s window of opportunity to turn things around has officially expired.  Yet board members, educators and parents believe the school is providing a valuable service in embracing diversity and  maintain that scores can still improve.

Is the school somehow being penalized for embracing diversity? Or has it just become a bad school?

STRIDE Academy opened in 2005, offering about 200 elementary students in the St. Cloud area an alternative option to the traditional public and parochial schools in the area. It’s since expanded to a K-8 charter school, making it the only school among St. Cloud’s three charters to offer grades 7 and 8. A few of the core qualities that set it apart are its smaller class sizes, focus on leadership skills, and instruction delivery model that groups students by ability, rather than age.

In 2013, the school was recognized by the state for its high test scores and success in narrowing the achievement gap. But as the school continued to grow, it ran into some financial troubles, spurring Friends of Education to issue a corrective contract with the school ordering it to resolve issues of financial mismanagement, the following year. Ringsmuth joined the board during this period of corrective action. From what she gathers, those who started the school simply weren’t equipped to run the financial side of things as the school got bigger.

“There were times 4, 5 years ago where they were wondering how we’d pay salaries and stuff like that,” she said. “I was told it was imperative we be super up to date on our budget. We came up with a plan to get back on track financially.”

During this period, the school went through a change in leadership and began taking steps to accommodate growing enrollment. By 2015, STRIDE had consolidated its two campuses to the newly expanded building on Oakham Lane, about five miles south of downtown St. Cloud. 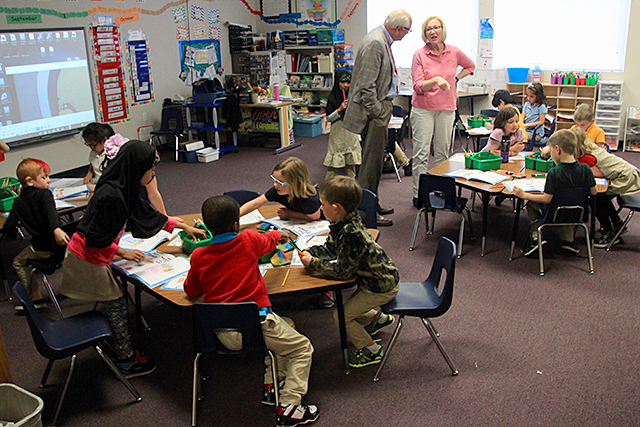 Simultaneously, the student population began to diversify. Four years ago, the school didn’t have any ELL students, Ringsmuth recalls. Then, in a single school year, they jumped from 90 to north of 140. It’s the sort of thing that’s stretched them beyond their means.

“We’ve honestly struggled to meet the needs of staffing,” she said, offering a recent example. “[English Language] teachers are not easy to find in this area, so we’ve had an open EL position for months.”

Those staffing issues may have been complicated by pending talks of school closure that began when Friends of Education issued a letter of intent to not renew its charter contract with the school, largely due to student test scores, in Nov. 2016.

In an email, Beth Topoluk, executive director of Friends of Education, highlighted a few points spelled out in the authorizer’s final determination. First, in 2013, the Minnesota charter law changed, requiring authorizers to consider improved student learning and achievement as the single “most important factor” in determining whether or not to renew a charter contract with a school. Topoluk maintains that STRIDE leadership did not provide any information, data or alternative assessments showing signs of improved student learning since the series of warnings they began receiving in 2014. Secondly, all student groups — including white, black, ELL, and those who qualify for free-and-reduced price lunch — “showed progressive decline in individual student growth such that no student group had average growth last school year.”

Standardized test data shows that school’s test scores bottomed out last year at 44.7 percent of the students testing proficient in reading and 43.6 percent proficient in math. This year’s MCA scores, which have yet to be reviewed by the state Department of Education, are showing a “slight uptick,” says STRIDE’s interim executive director, Dave Peterson.

“The downward trend of about five years has now been disturbed, stopped. We look at it and say, ‘Well is it too little, too late? Because the decision by the authorizer was made based on last year’s test scores and they were not good,” he said. “My view of this school is it’s ideally suited to perform a needed function — educationally, culturally, socially and economically — because it embraces diversity in a way in which it can maximize how all students learn. To me, it’s unfortunate that this ideal design is not having a chance to continue.”

Scrambling to keep the school alive, the school board diversified, brought in new leadership talent and began addressing operational inefficiencies.

Fighting to keep the doors open

STRIDE representatives attended a hearing with Friends of Education this past March to plead their case for staying open, once more. But at this point, their only hope is that Friends of Education has a last-minute change of heart and reverses its decision to close the school at the end of this school year.

“When all an authorizer looks at is test scores, then our diversity becomes our weakness,” Ringsmuth said, illustrating a challenge many school face when learning to accommodate immigrant students who are not learning not only English, but also school norms and how to use a computer that the standardized tests are administered on.

While the possibility of rebounding appears slim, Board Chair Sara Fromm met with Topoluk early Wednesday morning to lay forth one last pitch for keeping the school’s doors open another year to see if they can turn things around. In Fromm’s opinion, closure may be a legal course of action. But it could have “inadvertently discriminatory outcomes.”

“I don’t think they understand our population, or the St. Cloud area. That’s troublesome for me,” Fromm said of their Wayzata-based authorizer.

She says many of the school’s new ELL students are dealing with very challenging life circumstances — whether that includes having been born in a refugee camp, or having parents who didn’t receive any formal education themselves. Within the ELL population, she argues, these students are some of the most vulnerable because their lack of familiarity with the English language is compounded by the unique stressors faced by refugees. Yet, standardized tests don’t capture these nuances.

“My concern is that using the term EL [English Learner] …. it whitewashes the actual reality of what our kids are going through and how were trying to help them,” Fromm said. “It’s really hard to expect a kid to do well on the MCAs when they’re coming out of such traumatic living situations.” 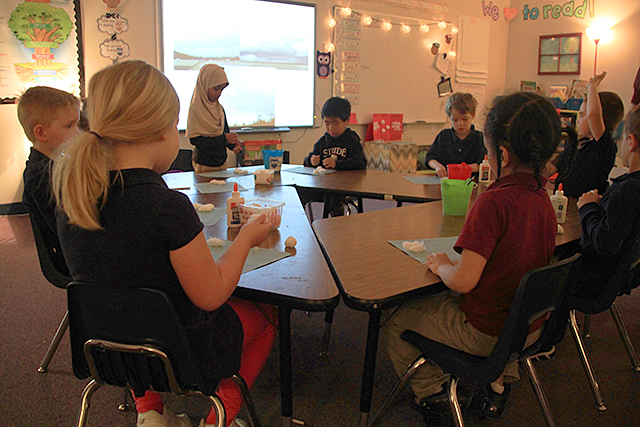 In many respects, she views STRIDE as a microcosm of the greater St. Cloud. The school is a pilot program, of sorts, for how the greater community can work through the growing pains of accepting a new community, she says. Listing a few examples, she says the staff has engaged in conversations over how to reimagine school uniforms and lunches that accommodate the needs of all students.

“It truly is a diverse population — not just racially, but in term of economics and how kids see themselves,” she said of STRIDE. “I think that’s part of the reason I’m really pushing this. I see this potential in STRIDE. I see us being able to exist together and learn from each other. And that’s an education to me.”

Too little, too late?

Topoluk’s recent email to MinnPost indicates some of these changes may have come too late. She had a group called Class Measures — a national third-party organization that provides school evaluation reviews — take a close look at STRIDE Academy in January. “That evaluation concluded that an ineffective learning environment exists, expectations are too low, and there is a general absence of academic rigor and purpose,” she wrote. “When is that acceptable for any child?”

On April 6, 2017, Friends of Education issued a final determination, reaffirming its original intent to not renew its contract with STRIDE.

STRIDE leadership is already taking the necessary steps toward closure, so that families have time to scope out their options. That includes working with the neighboring public school district to line families up with alternative placements.

Tami DeLand, director of communications and community engagement for the St. Cloud Area School District, says they have the capacity to accommodate STRIDE students, many of whom were at one point enrolled in the district before leaving to attend STRIDE. So far, they’ve had nearly 80 enrollments for the upcoming school year.

That still leaves about 114 staff members out of a job, come June 30. Given this uncertainty, Peterson says he’s been very impressed with how professionally teachers and support staff have handled everything. “My experience has been that the staff … somehow manages this awesome task of being able to come here every day with as optimistic an outlook as they can, because we know that rubs off on the kids.”

Eugene Piccolo, executive director of the Minnesota Association of Charter Schools, says he’s been in conversations with Friends of Education as they contemplated what course of action to take. A charter closure is a traumatic event for everyone involved, he says, but this certainly isn’t the first time this has happened in Minnesota. Historically, over 50 charter schools have been shut down for poor academics, for mismanagement or a lack or management, or for not adjusting to financial realities soon enough, he said. In the case of STRIDE, if its downward trajectory was, in fact, tied to an influx of ELL students, then that should have been factored into their authorizer contract much earlier.

“Unless you’ve amended your goals during the contract period to reflect new realities, the school’s authorizer is supposed to close the school,” he said, reflecting on STRIDE’s current academic outcomes. “That actually proves the system is working the ways it’s supposed to.”