One morning last week, far removed from the latest political clamor over President Donald Trump’s proposal to defund national service programs like Reading Corps, a handful of 3- and 4-year-olds at an early learning center in St. Paul were busy building their literacy skills with their Reading Corp tutor, Donna Wiggins.

Seated around a kidney-bean-shaped table, they began one of their daily activities: writing out their names on mini white boards. Some were using their name card for guidance.

“That’s a good ‘J,’ ” declared a little girl, lifting her marker and looking toward Wiggins for approval.

From across the table, a little boy piped in, ready to take on this new letter that had garnered such praise. “I can make a ‘J’ for you — easy peasy!” he said.

“Some kids are just naturally interested,” Wiggins later explained. “If you get them going, you can usually draw a crowd.”

Then they all lined up to head to breakfast. Before they left the room, though, they squeezed in one more literacy activity  — this time, a Reading Corps activity led by their classroom teacher.

Asking for a word that rhymes with “rock” a student yelled out “bock” and they all sang the transition song together.

“Rock. Bock. These words rhyme,” they chimed three times, then finished with a line they knew by heart. “They sound the same at the end.”

To the casual observer, these activities may not seem all that special. But they’re a scripted part of the Minnesota Reading Corps model that’s being replicated across the nation to help children from age 3 to third grade become proficient readers.

As the future of the program enters a period of greater uncertainty, leadership at ServeMinnesota — the local organization that oversees Reading Corps and other federally funded service programs that fall under the umbrella of the Corporation for National and Community Service — are looking to expand upon and further refine this effective, research-based program.

“We don’t want to be consumed with fear, but this is the first time a president has proposed eliminating [it],” said Audrey Suker, chief executive officer of ServeMinnesota.

Researchers have determined that grade three is a critical juncture for reading skills. Students who have not achieved reading proficiency by the end of third grade are more likely to continue struggling with reading for years to come. Down the road, they’re less likely to graduate from high school on time. And for those who persist, they’re still less likely to attend college.

Since 2003, Minnesota Reading Corps has been placing trained tutors in preschool sites and elementary schools across the state to help ensure students get the one-on-one support and targeted interventions they need.

Initially, the program reached 250 kids, primarily in the Twin Cities area. Today, Reading Corps volunteers are working with nearly 30,000 students at more than 900 sites across the state. While the reading proficiency gap does break down along racial and socioeconomic lines, program leadership say there’s a real need for tutors outside of the urban core because it simply doesn’t come naturally for all kids. 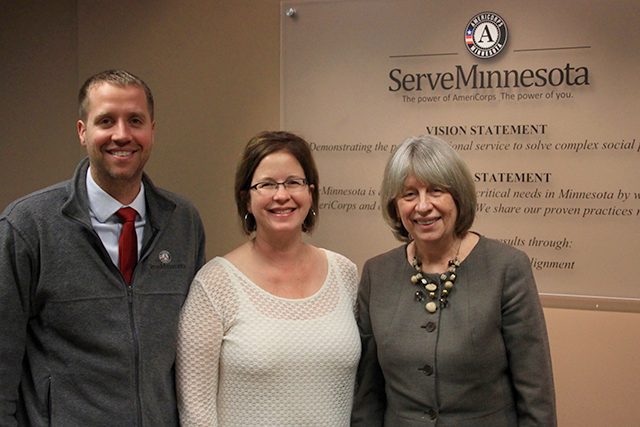 “There is a science to learning to read,” Lisa Winkler, spokeswoman for ServeMinnesota, said. “We hear, across the board, from parents that their houses are filled with books, they themselves read all the time, and they can’t figure out why their kids aren’t making the leap. Reading Corps really helps them address that.”

While the Reading Corps program may not be very well known outside of the early learning community, its effectiveness has been documented over the years. Most recently, according to an independent study conducted by researchers at NORC at the University of Chicago in 2014, 4- and 5-year-old students in a Minnesota Reading Corps classroom outperformed students in comparison classrooms in recognizing letter sounds, rhyming words, letter names, picture names and alliteration. Across the board, students with higher risk factors made stronger gains.

For instance, one kindergarten readiness benchmark is being able to recognize and produce rhyming words. In one of five assessments, researchers found that, in a group of students who all started with five rhyming words in the fall, students with the tutors outperformed their peers without tutors by five additional words at year’s end, coming in at a total of nearly 14 rhyming words.

According to another independent study, the Reading Corps program is impacting at-risk students in other ways as well. In 2012, Dave Heistad and Robert Wedl — two local education data experts — conducted a matched sample analysis and found that special education eligibility and placement is two to three times less likely for students who went through the Reading Corps program.

What makes it special?

On a very basic level, Reading Corps tutors are able to deliver the one-on-one supplementary instruction for students who are struggling to make up ground that their classroom teachers simply don’t have the time to deliver on their own. But good intentions, alone, don’t yield academic gains. These tutors receive a block of training upfront, along with ongoing training throughout the duration of their service from two coaches to ensure consistency.

This piece is key to the program’s effectiveness, says David Parker, research director at ServeMinnesota. Those who study the implementation and follow-through of educational programs, he explained, have found that when the training only happens on the front end, those strategies only have about a 5 percent chance of being in place later on.

“So a lot of innovative ideas come through, they come and they go. But with ongoing coaching and support it’s a 95 percent chance of it being done farther on down the road,” he said. “We’ve internalized that.” 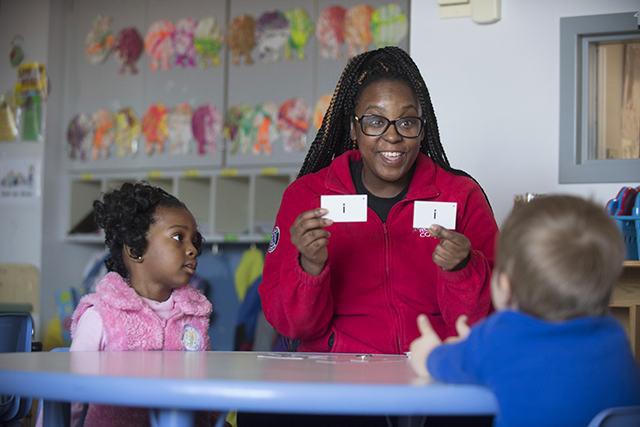 ServeMinnesota
Since 2003, Minnesota Reading Corps has been placing trained tutors in preschool sites and elementary schools across the state.

Reading Corps tutors sign up for a one-year commitment and are eligible to serve a total of four years. They receive a modest living stipend, along with an education award of up to $5,800 that can be applied toward student loans or tuition. Often, Winkler says, volunteers use the experience as a pathway into the teaching, gaining experience as they pursue a teaching license. Volunteers age 55 and older have the option to gift their education award to a child or grandchild.

Now completing her second year of service, Wiggins, 61, is using the experience as a way to transition to a career she’ll find more rewarding. After working for about 30 years as a medical receptionist, she says, she’d grown tired of working with adults and wanted to give back to society. She’s currently pursuing a degree in early childhood development at St. Paul College and hopes to complete her teaching practicum at the Wilder Foundation Child Development Center, where she’s currently volunteering.

Christine Mackai, a first-year Reading Corps tutor at Northeast Range School in Babbitt, is also looking to go from literacy tutor to teacher. Her degree is in agriculture, but she set her farming ambitions aside when her husband took a job in his hometown. Now in her 40s, she has three children in the district and has been substitute teaching and volunteering at the school for the past three years.

She volunteers 20-25 hours a week, working with the same 10 students every day. As students progress, they test out of the program, she says, so she ends up reaching more than 10 students over the course of the year.

Describing one of the routine Reading Corps interventions she does with her older students, she says they take a reading passage and go through it again and again to build students’ fluency and confidence. First, the child attempts to read the passage. Then they dissect it one word at a time, alternating back and forth. 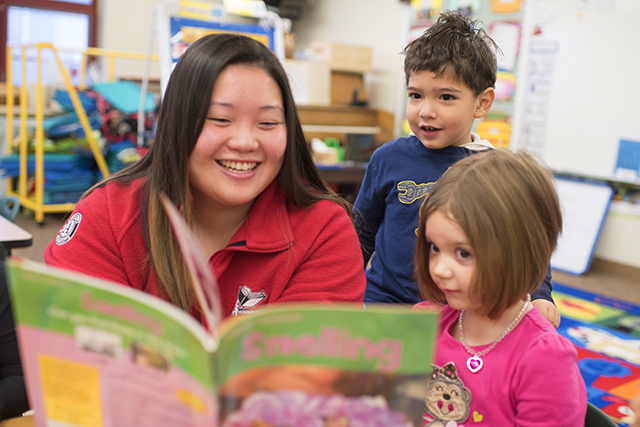 ServeMinnesota
Reading Corps tutors are able to deliver the one-on-one supplementary instruction for students who are struggling to make up ground that their classroom teachers simply don’t have the time to deliver on their own.

“What happens is their speed goes up, automatically,” she says. “Then they can go ahead and read afterward and the flow is so much better. They can get through that passage a lot faster. Their scores go up. And there’s a smile on their face.”

Principal Kelly Engman serves as an internal Reading Corps coach, working closely with Mackai and the teachers at her school. While they’ve only had Reading Corps at the school for two years, she’s become a huge advocate of the program.

“There’s a lot of modeling and pushing the pace of reading, hearing the way adults read fluently. They they try to model that themselves,” she explained. “Right now we don’t have anybody else set up to work with kids one-on-one …. To see that program gone would really be kind of a disaster in some ways, because it is so research-based — the interventions and the way it’s delivered. We do fidelity checks to make sure it’s implemented correctly. And when it is, you can see how it makes a difference.”

Since Trump brought it up (by proposing to cut it down), here’s a look at the reach and impact of the Minnesota Reading Corps