As the outgoing superintendent of St. Louis Park Public Schools, Rob Metz, puts it, many schools are experiencing “initiative overload.” There are so many academic and behavior interventions and models and frameworks circulating through the education sector that it can be hard to decide what, exactly, is worth the effort.

It’s called Building Assets, Reducing Risks (BARR). The framework was developed by a former school counselor in the district, Angela Jerabek, who saw a need to create a comprehensive support system for ninth-graders struggling to make the transition to high school.

In brief, students are assigned to cohorts with a set group of teachers. These teachers take turns leading a weekly relationship-building activity with students. They also meet weekly with each other to review students’ grades, at a very granular level, so they can discuss any concerns and problem solve together. Depending on the situation, they invite students — along with their parents, administrators, student counselors and other support staff — to engage in various interventions, as needed.

On paper, it doesn’t sound all that innovative. But it has at least one really important qualification that most support models are lacking: It’s backed by a powerhouse of evidence, funded through federal grants.

The BARR program is the recipient of three federal Investing in Innovation Fund grants, which are aimed at developing, validating and scaling up evidence-based practices that improve student achievement or growth. The BARR team has already trained staff at 47 schools across nine states, including California, Texas and Maine. They’re currently working with a five-year, $20 million grant to expand the program to at least another 120 schools, Jerabek says, with a long-term goal of reaching 250 schools by 2021 and establishing five notable, national hubs.

“In terms of researchers and an academic audience, we’re really well-known by them. We wanted to make sure the model is ironclad, which it is,” she said. “We’re shifting gears to make sure this is more commonly known, and not just from an academic lens.”

The BARR model underwent a rigorous randomized control trial during the 2014-15 school year. Students in 11 high schools were randomly assigned to either receive supports under the BARR model or not, for one year. The first cohort of schools included a rural school in Maine and two suburban schools in California, representing a wide range in the school size, as well as the percentage of minority students and students living in poverty.

The report, published by the American Institutes for Research, concluded that students served by the BARR model, as well as the participating teachers, showed “statistically significant positive impacts” when it came to reading proficiency, the number of core credits earned, passing courses, teacher effectiveness and more.

Jerabek has been immersed in data collection for more than a decade, in an effort to prove the student-support model she’d developed to support ninth-graders in 1998 actually works. After working as a school counselor with ninth-graders at St. Louis Park High School for five years, she had reached a breaking point.

“When half the students are failing their classes and I’m doing everything I can and students are continuing to fail, I wasn’t feeling successful,” she recalled. 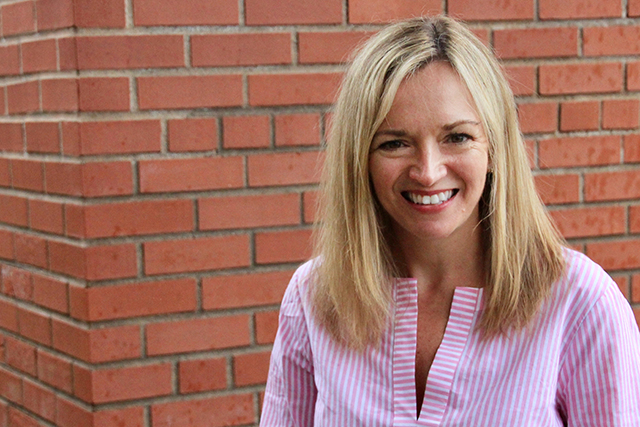 MinnPost photo by Erin Hinrichs
Angela Jerabek has been immersed in data collection for more than a decade, in an effort to prove the student support model she’d developed to support ninth-graders in 1998 actually works.

Feeling defeated, she went to her administrator to resign, she says. But she was encouraged to tackle the issue from a more systemic approach. Across the nation, ninth grade has been identified as a pivotal year for students, as it often sets a student’s trajectory through high school and beyond. But it’s fraught with some common barriers, including students’ susceptibility at that age to cave to peer pressure, a transition to a new school that disrupts students’ support networks, and increased autonomy for students as they take electives and core classes taught by teachers who are often teaching in silos.

Given these changes, ninth-graders are more apt to fall through the cracks. Research has shown, for instance, that they are 3-5 times more likely to fail a class than students in any other grade. And 70-80 percent of students who fail ninth grade will not graduate from high school.

The BARR model helps ensure that students stay afoot — both in terms of academics and their social-emotional development — by equipping educators with a structured support system. The two key pillars are positive, intentional, relationship building and thoughtful data usage. Taking on the model doesn’t require schools to change curriculum or pedagogy. The two main things a school needs to commit to, Jerabek says, is to coordinating schedules so teachers who have a set cohort of students can meet weekly and to hiring or appointing a BARR coordinator. Staff will receive trainings from BARR staff before the start of the school year and they’ll continue to conduct fidelity checks and offer coaching throughout the year.

At St. Louis Park, they have a full-time BARR coordinator who works with administration to develop the schedule to accommodate six blocks of students and their teacher cohorts in both ninth and tenth grade. It’s no small task, says Scott Meyers, the high school principal. But he says it’s well worth the hassle of grouping teachers by their strengths and, as is the case at his school, building their meeting time into the school day to help ensure everyone can participate. He’s such a strong believer in the model that he’s now hiring ninth-grade teachers that fit BARR.

“We’ve actually changed a good portion of the interview questions we ask a prospective ninth-grade teacher … to really  get the type of teacher you want to be collaborative and fit into this model,” he says, noting that these questions focus on how they get to know kids, how they hold them accountable, and how they interact with other teachers.

Metz, who will be joining the BARR team to serve as its lead administrator of sorts at the end of the school year, says the model may not strike many as being innovative. But after serving in schools for 36 years — many of which he spent at the elementary level —he says that, in many ways, it is.

“BARR is the perfect example of a relationship concept that we take for granted at elementary. I always tell people: ‘In an elementary school teachers teach children, and in a high school teachers teach subjects,’” he says, noting secondary teachers often go into teaching because they have a passion for their content area. “In the old traditional high school model, the subject was the most important thing. This flips that around.”

While many educators take it upon themselves to build relationships with their students, the BARR model helps ensure that every teacher is making a sincere effort to connect with students on a social-emotional level. Breaking from the normal routine of delivering classroom instruction to foster this connection, teachers in a cohort take turns teaching a weekly I-time lesson. The non-graded lessons, which are laid out by BARR, cover everything from lighthearted ice breaker activities to dealing with grief and loss and cyberbullying.

On a recent afternoon at St. Louis Park High School, a classroom of ninth-graders circled up their desks for an I-time lesson led by their economics teacher. Their agenda for the hour: introduce the student on their right by sharing their name and an admirable trait of theirs, then pass out compliments to each other by playing a heads-down game and then creating compliment cards. 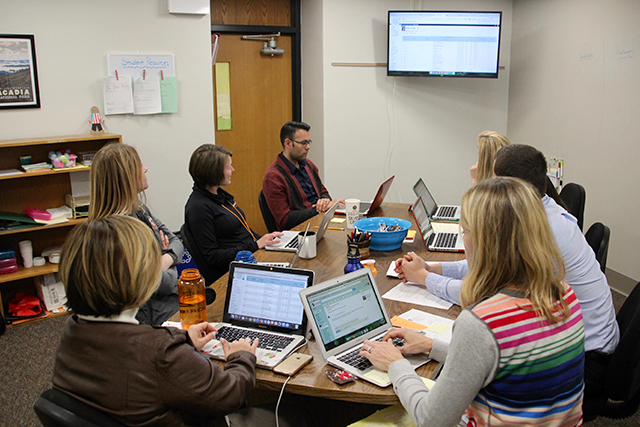 Modeling what the introduction activity looked like, the teacher introduced the female student seated next to her, sharing her name and complimenting her on her equestrian talent. Then she cued the rest of the students to join her in telling that student “Good afternoon.”

“It sounds a little cheesy. That’s because it is. But it’ll be a lot of fun, though,” she said, triggering affirmation from another student in the circle who was familiar with the activity.

As they went around the circle, the students giggled and smiled over revelations that they were a group of talented athletes, artists, musicians and “cool” people.

Whatever the topic, the main objective of these activities is to equip teachers with insight into students’ passions that they can leverage to challenge them academically, and to help teachers better understand what’s going on below the surface with each student.

At their weekly meetings, they pull up each individual student’s grades and troubleshoot together, flagging any behaviors they’re concerned about and brainstorming ways to help ensure the student is making progress.

The power of holding these granular, data-driven teacher meetings at the secondary level is twofold. First off, teachers are better able to notice patterns that might be inhibiting a student’s  progress — whether it be identifying a group of peers who are always off-track when they’re together, noticing a pattern of disruption during a particular time of day, or piecing together the fact that a student who’s failing one class is doing well in every other class.

Kris Erickson, a ninth-grade English teacher who’s been in the district for seven years, says the kids realize pretty quickly that the teachers are comparing notes and holding them accountable — so there’s no pitting one adult against another, or flying under the radar. And the beauty of the collective safety net, she says, is that teachers can divvy up interventions based on who has the strongest connection with a particular student.

“One of the hardest lessons as a young teacher is you want everyone to like you,” Erickson said, noting it’s a relief to know that if some kids don’t like her energetic teaching style she can recruit a colleague to reach out to those who are struggling in her class.

For Yusra Jara, a senior student who credits the BARR program with helping her get through a rough patch that very well could have derailed her as a ninth-grader, the fact that her teachers had time, and a framework, to keep tabs on her during these formative years was crucial. She recalls feeling a bit like her teachers were “on her back.”

“I think I have finally reached the point where I know who I am. They know who I am. Now I have a personality that everyone can connect me to,” she said, noting it’s bold and if you don’t know her well, can be misinterpreted as abrasive or rude. “It was a long four years, but I made it.” 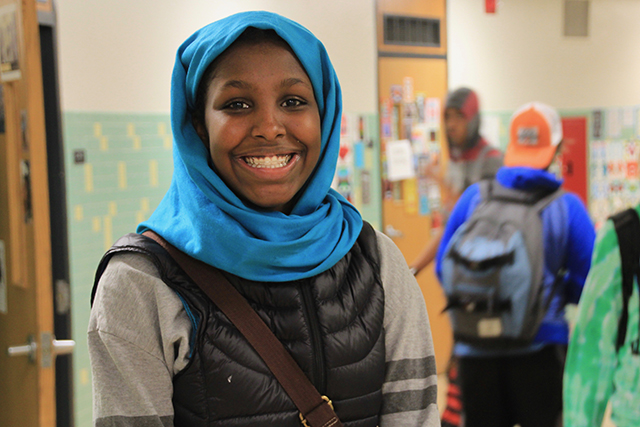 MinnPost photo by Erin Hinrichs
Yusra Jara: “I think I have finally reached the point where I know who I am. They know who I am. Now I have a personality that everyone can connect me to.”