When Carrie Bakken and her husband, Michael Durchslag, got their copy of the Minneapolis summer community education catalog in March, they flipped through to see what Minneapolis Public Schools was offering for youth in their community, on the north side.

On a page near the back, they found the “Loring Leaders Summer Camps” — an eight-week stretch of camps offered Monday through Thursday at Loring Community School, on 44th Avenue N., at $40 a week for a half day, or $70 a week for a full day. The next nearest option was a six-week stretch of full-day camps held at North High School that’s also focused on leadership. That was it.

Then they flipped through page after colorful page of summer program offerings in the Barton, Dowling, Hale and Southwest school communities, primarily for youth in grades K-8. In these sections of the catalog, they found a breakdown of each week, with a wide range of activities like “Bike Explorers,” “Quidditch World Cup,” and “Mermaids and Unicorns,” each listed with a time block and a fee, often a couple of hours for $35 or $40. These are the types of classes that caught her 11-year-old daughter’s attention, she says. But commuting across the city and back for a two- or three-hour class just wasn’t practical, she said.

Beyond that, based upon her 17 years of living in the Loring community and from her experience working with students at Avalon — a charter school in St. Paul that utilizes a project-based learning model — she knew that a kid’s socioeconomic background doesn’t determine their interests or desires.

“My whole school is based on finding kids’ passions and interests and getting them motivated based on that,” she said. “With privileged students, you get the presumption that you have interests. And then if you’re not from a white, privileged background,  you’re just seen as needs-based. I think that kind of mentality is pervasive in education.”

The apparent disparities prompted Bakken to take action. She emailed district staff, expressing her concerns, and was invited to meet with those in charge of summer community education programming the second week of May.

She says the meeting eased her frustration a bit, once she learned more about all of the offerings and the marketing limitations of the print catalog. But she’s still not convinced that kids on the north side are being given equal access, in terms of choice.

“I had mixed feelings,” she said, reflecting on her conversation with district staff. “I did feel like they had a genuine interest to address it. I just don’t know if anyone’s willing to address it in a radical way to promote more rapid change.”

Jack Tamble, the executive director of Minneapolis Community Education, met Carrie’s concerns with an open mind. Once it was brought to his attention, he says, he agreed with her take-away from the summer catalog — that programming appeared to be inequitably distributed across the city.

Then he offered some context. First, there’s an unequal distribution of school-aged youth that, in part, drives where programming ends up. “We’ve got about 12,000 kids in the north and northeast part of town,” he said. “And almost double that south of 94.”

Turning his attention to the Southwest Super Summer Camp [PDF], which stands out as the most robust summer program, he explained how the program had built up over the course of the past 25 years or so, in response to community demand. The idea came from a staff member who saw how expensive many summer-camp offerings listed in the Star Tribune were and wanted to offer Minneapolis families a more affordable opportunity. The program at Southwest started out small, and has grown in popularity to the point where it now serves 500 to 600 kids a week, Tamble explained.

Emily Ziring, Bakken’s sister-in-law and a Southwest resident who also sat in on the meeting, can attest to the popularity of the summer program in her neighborhood. While her own kids haven’t attended, it’s become a summer hallmark, offering a wide spectrum of classes like “Little House on the Prairie,” “Henna” and “Horseback Riding.” 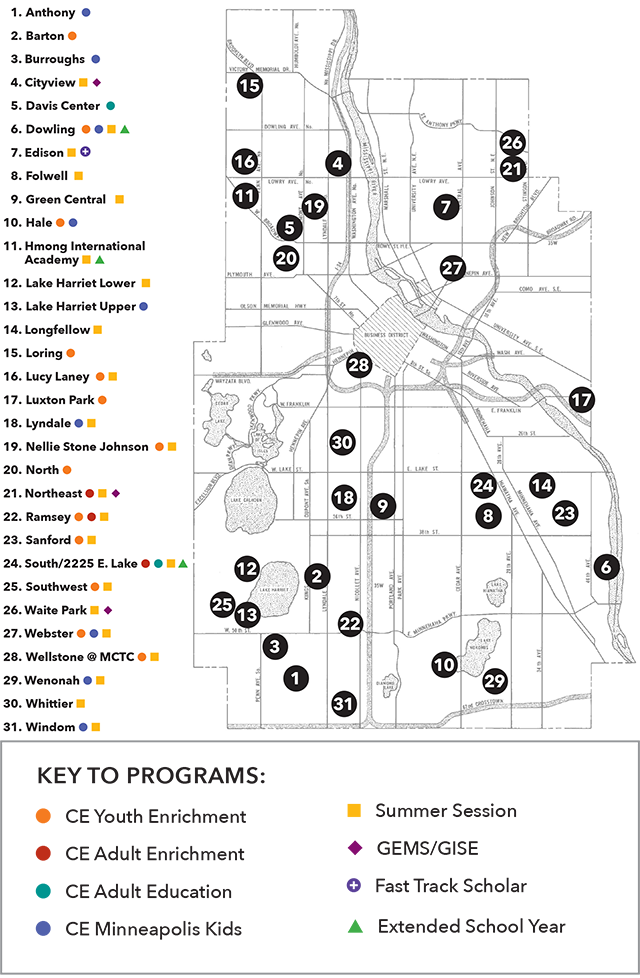 Minneapolis Public Schools
The traditional youth summer enrichment programming referred to in this story is denoted by an orange circle on the “2017 MPS citywide summer program locations” map.

If the district were to redistribute some of these offerings, to help remove barriers of distance and transportation, she posits, they might attract a more diverse group of students. “I really do believe that if parents in my neighborhood understood the impact it would have on equity — if it meant offering more programs to kids on the north side — I think they would be willing to give up some of the programming at Southwest and the other neighborhoods,” she said.

But Tamble doesn’t want to disrupt the Southwest program.

“I don’t think it would be fruitful, nor strategically smart, to take a program where we’re seeing success and move it ‘X’ number of miles away,” he said. “Our goal would be to replicate that in other parts of the city — whether it’s in the Dowling area, or Waite Park or Northeast middle, or over at North or Laney or Loring— and hope that we attract kids that way.”

Creating a hub at North High

Unfortunately, some past attempts to replicate the extensive Southwest a-la-carte camp model elsewhere haven’t taken hold, especially where families have less disposable income, he explained. Anthony Walker, the staff member in charge of coordinating summer programming on the north side, says he’s been grappling with this dilemma for years.

“When I worked at Lucy Laney, because everyone wants to replicate the Southwest program, I was like, ‘I’m on the North side. Let me do this,’” he said, reflecting on attempts in 2011 and 2012. “But when I did it, I didn’t get any enrollment. Charging fees like that, it’s difficult. Families were not able to afford those fees.” So, rather than being faced with the difficult situation of having to call off a camp with low numbers at the last minute — leaving those parents without other options, since registration takes place in the spring — he’s focusing on making offerings on the north side accessible.

Loring and North haven’t had a summer program in a couple of years, he said. So, after coordinating with the local parks board and libraries to ensure they’re not duplicating efforts, they’re offering families full-day camp opportunities with a variety of activities embedded into each week of camp.

“What we responded to in the north side is, ‘We need full-day programming. We don’t have the luxury of dropping our kid off for an hour or two and then picking them up,’” Walker said.

At North High, the Beacons camp — which used to be offered in some form across different school sites, but has now been consolidated at North High — will offer things like hip-hop dance, theater, leadership, experiential learning, art, music, production, soccer, football and basketball for free to camp participants. They’re also subsidizing the costs of transportation and meals  to help ensure that all kids have access to the camp.

Goal is to build up program at North

The goal, he said, is to build up the program at North so that it becomes a point of community pride and an opportunity for summer employment for alumni. “We’re going to start small,” he said. “We’re going to build that up. Then we’re going to that model where kids see themselves as a North High Polar in this community. That’s really what I want to focus on.”

“This could be a very integrated experience for all kids, if they were really thoughtful about it,” she said. “But instead, I’m sure there are really white experiences in Southwest because camps can be very segregated. I think there are ways to make it more inclusive.”