It’s too early to tell whether the opt-out rates for the number of students choosing not to take the Minnesota Comprehensive Assessments (MCAs) in math, reading and science are continuing to climb. That’s because this year’s test scores and participation rates won’t be released by the state Department of Education until later this summer.

This lag time is often cited as one of the major critiques of the state standardized tests. Teachers don’t get the results in time to modify instruction or develop interventions for those who were tested. And students are often left feeling that the tests don’t matter. Furthermore, opponents take issue with the fact that test scores are tied to teacher evaluations.

But state policymakers and education officials are hoping a recently added use for MCA scores may provide an incentive for high school students to take the test. These data sets are critical for identifying achievement gaps and informing curriculum and instruction decisions on a larger scale. This information is also utilized by parents when they’re considering which schools their children should attend.

When large numbers of students opt out of taking the MCA tests, not only is the usefulness of the results diminished, but schools also risk being penalized. Since the MCA score are used for federal accountability reporting, schools are mandated to get 95 percent of students to take the test, even though students and parents have the right to opt out. In recent years, certain high schools have seen a significant drop in test participants. For instance, at Southwest High School in Minneapolis last year, 95 percent of the 11th-graders opted out of taking the math test and 78 percent opted out of taking the reading test.

So, back to that new, little-known, use of the MCAs. Starting this upcoming school year, students can submit their 10th-grade reading and 11th-grade math scores to the colleges and universities of Minnesota State — the state postsecondary system formerly known as “MnSCU” — to demonstrate college readiness in these core areas. Those who meet the benchmarks that the state Department of Education and Minnesota State agreed upon are able to avoid having to take remedial courses.

Remedial courses are developmental courses that students have to pay for and complete before being given access to credit-bearing courses in that subject area that count toward their degree.

“The entire issue started with trying to find ways to reduce the costs for students going into college and trying to reduce the number of developmental classes they needed,” said Kevin McHenry, assistant commissioner with the Minnesota Department of Education. “That was really the impetus — can we make the MCAs more valuable for students?”

Formerly, students looking to enroll in Minnesota’s public two-year colleges and four-year universities submitted an ACT score or took accuplacer tests to demonstrate proficiency in core subject areas. If their scores were low, they’d be assigned to remedial courses to help ensure they acquired the foundational skills needed to succeed in related credit-bearing coursework.

The state legislation that passed last year allows prospective Minnesota State students to bypass these tests by submitting their high school MCA scores in reading and math instead. On the surface, it looks like a relatively minor change. But, at least initially, it faced a great deal of pushback from higher education leadership. 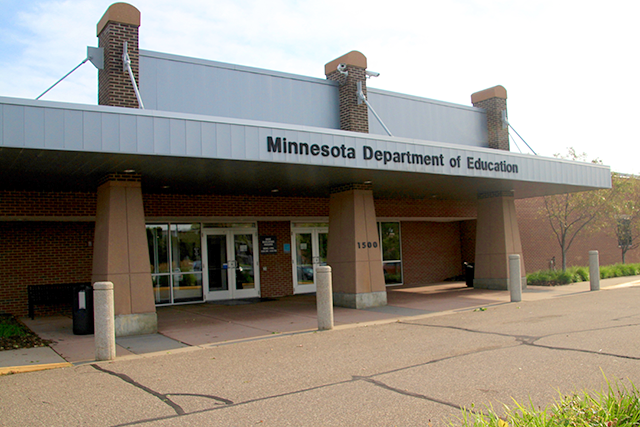 MinnPost photo by Erin Hinrichs
Those who meet the MCA benchmarks that the state Department of Education and Minnesota State agreed upon are able to avoid having to take remedial courses.

The state Department of Education had conducted an evaluation to verify that benchmarks on the high school MCAs were sufficient indicators of college readiness. But those in higher education didn’t agree. In a five-page letter addressed to education Commissioner Brenda Cassellius on Feb. 15, the chancellor of Minnesota State, Steven Rosenstone, rejected the current MCA benchmarks. Dissatisfied with what had been put forth, Minnesota State contracted with an independent evaluator, Human Resources Research Organization, to conduct a validity study on the MCA benchmarks. As stated in the letter, by pulling existing student data, they were able to establish more specific MCA score ranges proven to predict a 50 percent probability of earning an ‘A’ or ‘B’ in the corresponding college course.

“That type of information allowed us to have a more precise understanding of which MCA score would increase the probability of how a student would do in a college-level course,” said Pakou Yang, systems director of P-20 and college readiness at Minnesota State.

Why the change is significant

Now that the details have been hammered out, students enrolling this fall who have sufficient MCA scores will be able to bypass remedial coursework. This is significant for a couple of reasons.

First, the MCAs are not timed tests. This eliminates one barrier, as some students perform better in an environment where they don’t have the pressure of a time limit. Also, the MCAs are directly aligned to Minnesota standards in reading and math, as opposed to traditional entrance exams like the ACT, which are designed to be used at colleges and universities across the nation.

While college entrance exams are currently administered for free to students while they’re in high school — a recent change in law that ensures students have equitable access to the exam —  officials at the state Education Department caution that the Legislature is pursuing some changes that would add barriers, such as requiring students to pay upfront for the exam seek reimbursement later on.

“The more barriers that are thrown in front of something like the ACT, the more important having it built into the MCA may become,” Josh Collins, director of communications for the state Department of Education, explained. “If not everybody has to take the ACT, some schools might not encourage all of their kids. Some schools might say ‘Johnny doesn’t need to take the ACT.’ That might mean that Johnny never discovers that he’s really good at this and sees a path forward that he wouldn’t have already seen.”

Granted, not all students who finish high school college-ready can rely on their 10th-grade reading scores and 11th-grade math scores to demonstrate this. Some make the necessary leaps through the completion of their senior year. But, at the very least, knowing that their MCA scores could directly impact their postsecondary prospects may get students thinking more strategically about college earlier on.

“I think that people make more informed and better decisions, in part, when they have better information. So a youngster might opt out because he or she doesn’t like the test. And they might not even be considering a two-year college,” Joe Nathan, former director and now senior fellow of the Center for School Change, said. “If they knew that this could save themselves thousands of dollars, that might increase the number of students who at least consider two-year college.”

Minnesota standardized test scores have a new value. Here’s why it could pay to opt-in.