When it comes to K-12 education funding, educators look to the Capitol for regular increases to the basic formula to help cover the rising expense of things like building utilities. Recent increases, however, have done little to keep pace with inflation, placing pressure on educators to increasingly rely on school levies, the philanthropic generosity of community members and the creative ability of those within each school building to do more with less.

This year, Gov. Mark Dayton has proposed a 2 percent yearly increase to the basic formula for the next two years, earmarking $371 million of the state’s $1.65 billion surplus to help schools pay for the basics. The Senate has proposed a 1.5 percent increase for the same time period, adding $274 to the basic formula. And while the House recently accepted the Senate’s $300 million education budget target during conference committee negotiations, it released the lowest basic formula allocation proposal earlier this year at $207 million, or a 1.25 percent yearly increase for the next two years.

As the three parties debate the overall budget, education leaders across the state are already knee-deep in the budgeting process for the upcoming school year. In the St. Paul Public Schools district, as is the case in many districts, Principal Ryan Vernosh is grappling with budget cuts. In his district, the crunch is particularly acute. In part due to declining student enrollment, the district is facing a $27.3 million shortfall for the 2017-18 school year.

Looking to help make the big-picture school funding debate less abstract, Ryan Vernosh turned to social media. A couple of weeks ago, he tweeted an invitation to Republican House Majority Leader Joyce Peppin to “take a look at my school’s budget w/ me” after she was quoted saying she thought districts could “make it work” with less than a 2 percent increase to the basic formula.

Given Vernosh’s background as the 2010 Minnesota Teacher of the Year who’s now completing his first year as a principal (at Maxfield Elementary, where he started out as a teacher) — combined with his experience as a former communications employee for the district — he’s uniquely positioned to help break down the school-level realities of the education funding debate at the capitol. As of last Friday, he says Peppin hadn’t taken him up on his offer. But here’s a look at what he would have said.

Maxfield Elementary serves roughly 315 students in Pre-K through grade 5. Offering a brief rundown of student demographics, Vernosh noted that his school has the highest rate of students who qualify for free-and-reduced price lunch in the district. It also has some of the highest special education percentages, along with some of the highest rates of chronic illness and asthma. And about 30 percent of his students have experienced homelessness this year alone, he says.

“So when legislators are debating a 1.25 to 2 percent [increase] on the formula, they need to see our story. They need to see how those decisions will impact the services we can provide here,” he said.

He couldn’t go into specifics yet, since the school board isn’t scheduled to finalize the budget until sometime in June. But he says all school principals in the St. Paul district received their preliminary school budget allocations right before spring break and he’s heard from his colleagues that the cuts “ran very deep,” even at schools with projected enrollment increases, like the one he oversees.

Speaking generally, he explained that one of the first things to go is discretionary funding for school materials, like supplementary curriculum materials, school supplies for students in need, paper for the copy machine and new books for the school library.

His school is outfitted with an iPad for every student, but he’s a firm believer that technology can “only go so far in reading instruction.” But outfitting school libraries with current, relevant materials takes resources — the types that often get cut when budgets are tight.

After the librarian conducted a review of the collection in 2013, they found the average publication year was 1993. She’s since worked to replace outdated materials — like nonfiction books that teachers use to supplement classroom instruction and new books that tap into student’s interests — and has bumped the average age up to a 2000 copyright date.

In terms of classroom supplies, he points out that most teachers already surpass the allotted $250 expense tax deduction educators can file to help compensate for unreimbursed professional development and classroom material purchases. During his teaching years, he recalls buying out-of-pocket everything from backpacks and calculators to toothbrushes and additional snacks for students and families experiencing hunger.

Looking at other areas that may be trimmed, he raised concern over the school’s ability to hold professional development opportunities for its educators. They already utilize a lot of in-house expertise, he says. Funding, however, is needed to compensate teachers for their extra time.

Another budget item that’ll likely see a reduction in funding is parent engagement initiatives. The school has always used Title I dollars, combined with discretionary funding, he explained, to cover the costs of transportation, food and child care for families facing barriers to attending these after-school events.

“That was named as a high priority in our meetings,” he said, referring to community meetings they held to discuss the school’s pending budget cuts. “But the reality is we don’t have as many dollars to offer that to the extent we want to.”

He adds that his students’ parents aren’t always able to volunteer in the traditional ways, like coming in during the school day to help students practice reading or to serve as a chaperone on a field trip. 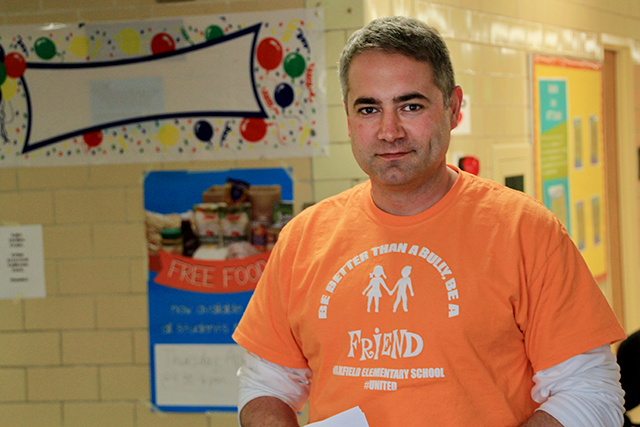 MinnPost photo by Erin Hinrichs
Principal Ryan Vernosh notes that his school has the highest rate of students who qualify for free-and-reduced price lunch in the district.

“We’re, quite frankly, serving a community that’s been marginalized for generations,” he said of those largely living in the Rondo neighborhood. “Lots of families are working two, three jobs just to get by and are not able to come in during the typical school day to volunteer.”

Fortunately, the school has some longstanding partnerships with external volunteer groups and donors like Target, Americorps, the YMCA and the St. Paul Promise Neighborhood. Each plays a role in supporting students’ social-emotional development, as well as their academic development, Vernosh says. But given new budget realities, he’s needing to re-evalute which contracts will continue to be funded, he said.

At the end of the day, finding ways to cut back on any of the aforementioned budget categories won’t be enough. The thing his families and educators have said they most want to preserve is the very thing that costs the most: people working at the school.

When it comes to staffing cuts, paraprofessionals — nonlicensed support staff who help teachers with things like providing one-on-one assistance for students with special needs — often find themselves most vulnerable to cuts. These adults are often some of the few role models of color that students have the opportunity to interact with at school. This year, Maxfield Elementary has 13 paraprofessionals on staff.

“As much as we all want to keep the number of people, we know … we’re not there,” he said, interrupting his train of thought to note that, even at current staffing levels, students would benefit from having more educators in the building.

For now, Vernosh is waiting to hear how things shake out at the Capitol. He provided a balanced budget to his district about a week ago. But he’s in a bit of a holding pattern until he’s able to know how much, exactly, he’ll be able to fund next school year.

“We’re all living in ambiguity until the state does commit and districts know exactly what they have to work with,” he said.

Until then, his offer to legislators to come see how school funding battles trickle down to the level of individual school sites still stands.

“We’re right down the road from the Capitol,” he said. “It’s oftentimes an enlightening experience to see the fantastic instruction, engagement, the relationships that we have with our scholars. You can’t help but feel that when you’re in the building. And then to be able to have a real critical conversation, saying, ‘Some of this may not be here next year because of decisions that are being made on the hill.’ ”