On Wednesday morning, students in Courtney Bell’s human geography course at North High in Minneapolis unpacked some of the key themes of European colonialism and imperialism that they’d learned about during the semester. To get the discussion going, Bell asked them to pull out a reading assignment she’d given them: “The Souls of White Folk,” by W.E.B Du Bois.

She read a passage and began prompting them to draw from what they’d learned in the African American history course they took with her last semester.

“Have you been taught from a European perspective, in your own educational experience?” she asked her students.

“It’s always about slavery. That’s it. Nothing else,” one student said, reflecting on what they’d learned about African-American history in the years prior.

Bell affirmed the comment, adding they’re often not taught much about native African cultures or the full resistance of the oppressed. That’s because most U.S. history courses are taught from the perspective of the colonizers.

“So what’s the impact of that?” she asked, noting colonization is both physical, in taking over native land, but also mental.

“If they taught us that all the way from the beginning up until now, it’s like going to a gunfight with a knife,” one male student chimed in. “We’ve grown up not knowing our history.”

These students all had the opportunity to delve into a lesser-known segment of history last semester. In Bell’s African-American history course, they’d learned about the kingdoms of West Africa, along with the cultures and traditions that predated colonialism. And when they covered slavery and the Civil Rights era, they explored historic figures who often don’t make the pages of U.S. history books. In essence, they’ve been equipped with a new narrative — one that celebrates their ethnic heritage and disrupts notions of white superiority.

It’s an opportunity Bell wishes she would have been given during her years as a North High Polar. “I know firsthand the impact of a lacking curriculum, in reference to myself and my history,” she said. “What it manifested was a self-hatred that I didn’t understand, a lack of pride, and an inferiority complex that lasted until I got to college.”

Now in her third year of teaching social studies at North High, she’s involved in a district-wide initiative that’s giving students the opportunity to explore U.S. history from a non-white lense. The district’s ethnic studies program currently consists of three different semester-long electives — African-American history, Chicano(a)/Latino(a) history and Asian-American history. It will expand to include two new history courses on Indigenous Nations and the African diaspora in the fall, making it the most robust ethnic studies program for high schoolers in the state.

Responding to community requests for a more culturally relevant curriculum — and piggybacking off the growing momentum around ethnic studies programming and research coming out of places like Arizona and California — Minneapolis Public School staff, along with community partners, decided to develop a homegrown collection of ethnic studies courses.

University of Minnesota Professor Keith Mayes and a number of his colleagues took the lead on curriculum development and the African-American history course was piloted at five high school sites in the spring of 2015, with about 250 students enrolled. These elective offerings expanded to every high school site the following year and enrollment grew to more than 400 students. This school year, the courses attracted more than 1,000 students.

The courses are designed for ninth-graders, specifically, to help pique their interest and engagement. Research has shown, for instance, that ninth-graders are 3-5 times more likely to fail a class than students in any other grade. And 70-80 percent of students who fail ninth grade will not graduate from high school. 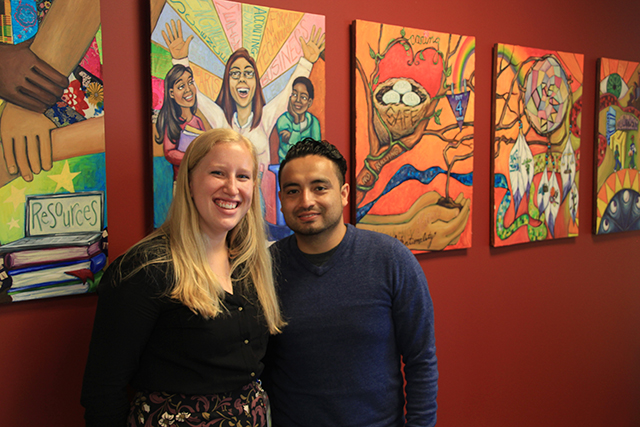 Kleber Ortiz-Sinchi, the district’s 6-12 social studies content lead, says the new ethnic studies initiative offers students who have been marginalized an opportunity to better connect with their education. “It’s very beneficial for our students of color, in a sense of getting tools and skills to navigate the system,” he said, noting white students also benefit from viewing history from multiple perspectives.

In practice, each school offers these courses in different ways, says Sam Weiman, the district employee in charge of coordinating things like professional development and resources for teachers involved in the ethnic studies initiative.

“We have some elementary and middle schools that are interested in starting ethnic studies early, starting to build toward the initiative,” she said, noting all teachers are welcome to attend trainings and use what they gain to inform their teaching, no matter the grade or content area.

In terms of how the high school ethnic studies courses are structured, they all contain similar focal points for each particular ethnic group: their history pre-European contact and invasion, their experiences in Minnesota, ways they’ve resisted forms of oppression, and how they fit into U.S. history beyond the Civil Rights Movement.

“These courses also speak to learning about the social creation of race, and how that affects both white students and students of color — looking at privilege and those types of things,” Ortiz-Sinchi said.

Critics of ethnic studies often contend that these courses can be divisive. Taking time to focus on equipping students of color with a stronger sense of ethnic pride, they say, is a waste of time when these students are lagging in core academic skills. But the research suggests otherwise.

While it’s too early, at this point, to draw any conclusions on how these ethnic studies courses may be impacting students’ school engagement and academic performance in Minneapolis, research out of Stanford that recently evaluated a similar initiative in the San Francisco Unified School District shows some promising results.

Not only did ethnic studies participation increase student attendance by 21 percentage points, but it also increased the cumulative ninth-grade social studies GPA by 1.4 grade points and increased the number of credits earned by 23 credits. The authors also argue these findings support the notion that this course reduced the probability of dropping out and possibly improved performance.

“Overall, our findings indicate that a culturally relevant curriculum implemented in a strongly supported context can be highly effective at improving outcomes among a diverse group of academically at-risk students,” the authors wrote.

In Minnesota, various school districts are turning to the Minneapolis districts and their partners at the University of Minnesota, for guidance. Weiman says similar initiatives are beginning to take hold or expand in areas like Robbinsdale, St. Paul, Edina and elsewhere across the state.

The list of proponents includes a number of east metro districts that belong to Equity Alliance Minnesota (formerly known as the East Metro Integration District). Mary Bussman, and equity consultant for the organization, says she first heard Dr. Mayes speak about the ethnic studies course he codesigned with the Minneapolis district at an event at Central High a couple years ago and recruited him to bring a modified version of the initiative to east metro educators.

“Rather than doing it as an ethnic studies course … we wanted to give all social studies and history teachers this information so they could embed this deeper in what they’re already teaching,” she explained.

In partnership with Dr. Mayes, they offered a series of trainings on how to share the untold stories that are central to African-American history, through underutilized primary sources, documentaries and more. About 30 teachers attended all 16 evening sessions, Bussman says, adding another 30 or so came to a number of classes as well.

“I think you can weave a racial and cultural understanding into each lesson we do,” she said.

Reimagining how history is taught in Minnesota: a look at the MPS ethnic studies initiative