The hallways at Prodeo Academy, a K-8 charter school in the First Lutheran Church building on the outskirts of northeast Minneapolis, are lined with moving boxes. Everything is headed across the Mississippi River, to a larger site at 620 Olson Memorial Highway.

School administration say the school — which was founded in 2011, began serving kindergartners in 2013 and has grown each year since — has outgrown its current location. Part of that expansion includes a new focus on adding on-site pre-K classrooms to take a more proactive approach to closing the achievement gap.

Based on an assessment students take at the start of their kindergarten year at Prodeo, only about 10 to 15 percent are able to do things like write their full name, name letters and numbers, indicate the sound each letter makes, or show the direction that a text is read, says Principal Chancey Anderson.

“You have all that ground to close,” she said, adding that securing the funding to add more pre-K seats has been a challenge.

Last year, they applied for and were awarded an initial batch of funding through the state-run Voluntary pre-K program. This allowed them to hire a pre-K teacher and enroll 10 students in her class during the 2016-17 school year. State funding covered a half-day option. But since their families needed a full-day option that would better align to their commute schedules in order to even make the pre-K option feasible, they cobbled together private funds to get things up and rolling.

Rick Campion, the school’s executive director, says they were under the impression that they’d also secured state funding to scale up to 40 seats next year, and then to 60 seats the following year. But with a number of changes made to the state’s pre-K funding system this legislative session, they’ve found themselves back in a place of uncertainty.

Prodeo leaders have already assured 20 families they’ll have pre-K slots next year, but they’re hoping to double that number by opening a second pre-K classroom if they’re able to secure additional state funds — either through the existing Voluntary pre-K program or the newly created School Readiness Plus program. Together, the programs allocate a total of $50 million in new state spending for preschool education and expire June 30, 2019. Yet with a fast-approaching application deadline of July 1, Campion says they have more questions than answers at this point.

“It’s been a significant amount of time for us discussing whether we continue it or not … because there’s tremendous risk in it,” he said, reflecting on their efforts to secure state funding to expand their pre-K program. “We have a tremendously high tolerance for risk because it’s in the interest of the kids. So we’re continuing to march forward.”

Administrators at Prodeo are not alone in their confusion over this modified portion of the state’s pre-K funding system. In a policy area that’s become highly political over the years — with Gov. Mark Dayton and his administration pushing to expand universal voluntary pre-K and Republican legislators and a number of education reform advocates backing a scholarship model that prioritizes at-risk youth —  the addition of a new funding stream, School Readiness Plus, doesn’t really signal a clear win for either camp.

What, exactly, is School Readiness Plus?

Long before the establishment of Voluntary pre-K, early learning scholarships, or School Readiness Plus in Minnesota, the state was allocating early learning dollars through its School Readiness program. Established by the Legislature in 1991, School Readiness funding streams are tied to community education programs rather than the K-12 funding system. This funding was designed to serve at-risk 3- and 4-year-olds in district schools, but it isn’t funded on a per-pupil basis, explains Hue Nguyen, assistant commissioner at the Minnesota Department of Education.

“The funding didn’t really provide funding for school districts to do more than perhaps hire a teacher, or a part-time teacher,” she said, adding the quality and duration of each program varied across the state, as there was no alignment to the K-12 system.

While School Readiness still exists, Nguyen says that most districts are now using these dollars to serve the needs of 3-year-olds because they can pursue other early learning funding to serve their 4-year-olds.

The new School Readiness Plus program and the existing Voluntary pre-K program are two such programs. Both are confined to serving 4-year-olds; applicants are divided into four buckets for consideration: the Minneapolis and St. Paul districts, other metro districts, Greater Minnesota districts and charter schools.

This session, the Minnesota Legislature allocated $50 million in new one-time funding to run these two programs. It’s intended to help schools increase pre-K enrollment either by creating a new pre-K program or by expanding upon an existing one.

One significant change adopted this year is a provision that states this new money cannot be used to supplant funding that schools are currently using to provide existing pre-K services.

“The language is put in there to say, ‘With this new money, we want you to serve more kids,'” Nguyen explained. “It’s kind of ensuring you are still using the same amount of funding you used last year to serve kids. And … you can’t take that away and replace it with the new money.” 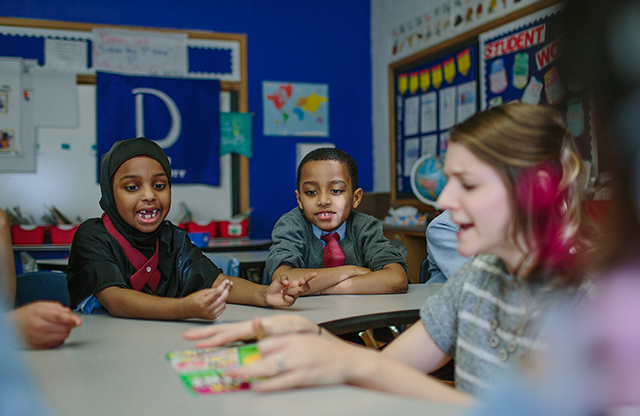 Courtesy of Prodeo Academy
Prodeo Academy — which was founded in 2011, began serving kindergartners in 2013 and has grown each year since — has outgrown its current location.

Last year, 74 school districts secured Voluntary pre-K dollars to serve 3,300 4-year-olds. Dayton was able to preserve funding for these seats as well. But the $50 million in new money approved this year to fund both School Readiness Plus and Voluntary pre-K fell short of the $175 million he’d initially sought to exclusively grow his signature program.

So what are schools looking to apply for pre-K funding supposed to make of the new School Readiness Plus program? That’s where it gets a bit confusing.

There are, however, a couple of distinguishing parameters placed on state dollars awarded through the School Readiness Plus program. Most notably, it can only be used to cover pre-K expenses for 4-year-olds who have one or more risk factors — including those who qualify for free- or reduced-price lunch, are homeless, or are English Language Learners. The dollars follow the individual at-risk students. In contrast, Voluntary pre-K dollars are awarded based on a school’s kindergarten poverty levels and proximity to quality child-care programs and can be used to fund pre-K seats for any student, regardless of their risk factors.

Speaking on the behalf of MDE, Nguyen defined School Readiness Plus as “a targeted Voluntary pre-K” because only at-risk youth are able to enroll at no cost, while families who don’t qualify can still participate for a fee, based on their income level and ability to pay.

Brandie Burris-Gallagher, a policy director at the local education reform group Ed Allies, characterizes the new program as something more distinct than a variation of the Voluntary pre-K program.

“Governor Dayton and Republican leadership decided that it was easier just to create a new, potentially duplicative, early learning funding source, School Readiness Plus, than to make the investments in any of the existing funding streams,” she said. “School Readiness Plus certainly pushes us closer to a more equitable and more parent-choice-driven model than [Voluntary pre-K], but it’s kind of wonky so it has the characteristics of a policy that’s reached in compromise.”

As staff at the state Department of Education begin to implement School Readiness Plus, they’re also working closely with the state Office of the Legislative Auditor. It is embarking on a review of the system, with a focus on duplicative efforts and lack of coordination. This session, state lawmakers identified early learning as an area in need of a critical look from a neutral party.

Once the parameters are set, Hauer and her colleagues will be looking to identify a couple of things, as directed by state lawmakers: duplication of services provided by existing programs, places across the state where there may be gaps in services, how the performance of individual programs is measured and what those metrics reveal about how well programs are meeting their purpose.

“It’s an enormous amount of different programs that cut across multiple state agencies and that involve multiple players at the local level, where the programs are actually implemented,” Hauer said. “Of course, the whole child-care system is a part of this, and child care can be provided in any number of different settings — some are family, some are licensed, some are not. It’s a pretty big world of multiple programs.”

The findings and recommendations will be ready by January 2018, she said — in time for lawmakers to deliberate next session.