When Patricia Abrams heard a bunch of commotion outside of her home off Penn Avenue in north Minneapolis last Thursday morning, she made her way to the fence at the front of her yard to get a better look. There, she found more 200 people, many of them students, escorted by local police officers, strolling down the street chanting and holding handmade signs that offered a simple message: We’re going to college.

Joined by some family members and neighbors who had also come to take in the scene, Abrams cheered them on.

“They doing something productive in their life — not out there gang banging, killing,” she said, adding that she is the proud grandmother of a recent North High grad.

Those walking elicited even more praise and honks from passing traffic along the 3.7-mile route, which took them from the offices of the Northside Achievement Zone (NAZ), located off Broadway Ave. W. and Penn Ave. N., to the Minneapolis Community and Technical College (MCTC) downtown.

But the “Path to College Walk” was about more than combating negative perceptions of the community. More than 40 community partners — including schools, nonprofits and government agencies — had come together to celebrate a college-bound mindset and promote positive police relations. “People think the northside is bad and we’re not educated,” said Dontayeah Hill, 15, a North High student who helped coordinate the event. “This is our way of showing them we are … and we want to go to college.”

A message of hope

Often, when local leaders talk about how to close achievement gaps — the disparities in educational measures like academic proficiency, graduation rates and college attainment between white students and students of color — they talk about raising expectations and pushing all students to be college ready.

It sounds great, says Sondra Samuels, president and CEO of NAZ, a federally designated Promise Neighborhood working to end generational poverty and educational disparities. But she doubts there’s any real sense of urgency to make this happen. 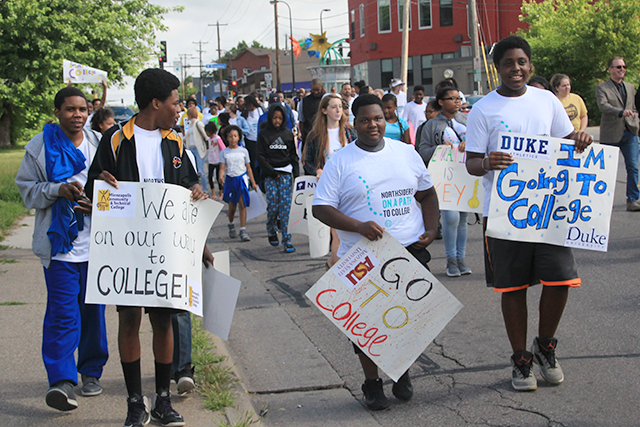 MinnPost photo by Erin Hinrichs
Youth heading down Penn Ave. N. at the start of the 3.7-mile walk from the NAZ office to MCTC to raise awareness about their educational aspirations of going to college.

“It’s not the expectation that they’ll go to college,” she said, offering a list of all the excuses people use to justify why some students get left behind: poverty, violence, lack of food, mobility, incarceration of parents and behavior.

“It looks like an ‘oops’ if a kid from an upper-middle-class family doesn’t go to college,” Samuels said, adding those kids often still have family ties that can help land them a well-paying job. “We don’t have those connections, so this is our path.”

Last year, the inaugural “Path to College Walk” turnout was much smaller, she said. And they only walked about five blocks. This year, organizers decided to scale it up, significantly.

Students and adult mentors from a number of partner organizations — including Cookie Cart, and 21st Century Academy, a youth program run by Kwanzaa Community Church — met in the basement of the NAZ office Thursday morning to finish making posters. When they filed outside to rally before the walk, Samuels took a moment to address police relations — a topic that comes up frequently in discussions on the north side.

With Officer Michael Kirchen standing by her side, she told those gathered that they’d be walking past the site where Jamar Clark and been shot and killed by an officer, and the site where Birdell Beeks — a beloved mother and grandmother known as “Mama Beeks” —  had been “gunned down by one of us.”

“The police are not our enemies,” she said, calling on everyone to pray for the young man who killed Beeks and “think about what led to that,” as well as pray for Clark, his family and the officer who shot him. “We have to figure this out — that’s our leadership work.” 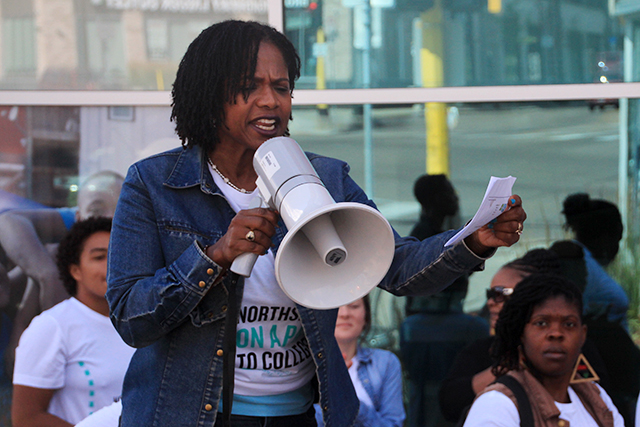 MinnPost photo by Erin Hinrichs
“The police are not our enemies,” said Sondra Samuels, president and CEO of NAZ, speaking about repairing community-police relations before the event. “We have to figure this out — that’s our leadership work.”

The other reason they had gathered to walk to the MCTC campus, she explained, was to demonstrate their belief in the ability of every northside student to go to and complete college.

It’s a message that especially resonated with Idaiya “Dae-Dae” Ward, 13. A student at Harvest Preparatory School, a charter school located in north Minneapolis, Ward took the megaphone as they were walking and led a few chants, shouting lines like “We’re going to college,” and “We already know what it is.”

For her, the walk was about showing people that students on the north side aren’t quitting or dropping out of school. “We’re the future, so we gotta show them better,” she said, adding she’s already sent letters to both Harvard and Stanford, letting them know how “I want to be successful and go there.”

In many ways, the act of walking was symbolic. “Our people have a history of walking to demonstrate need and want,” Vanessa Abanu, a director with NAZ, said in a press release. “It’s important to show forward thinking and positive momentum in this community and beyond.”

But the walk also served a more practical goal: to demystify the pathway to college for local youth. “To make this journey, it’s more than physical,” said Minneapolis Public Schools Board Member Don Samuels (who’s married to Sondra), noting it’s actually pretty hard for a northside kid to make it to downtown, where MCTC is located, by foot. 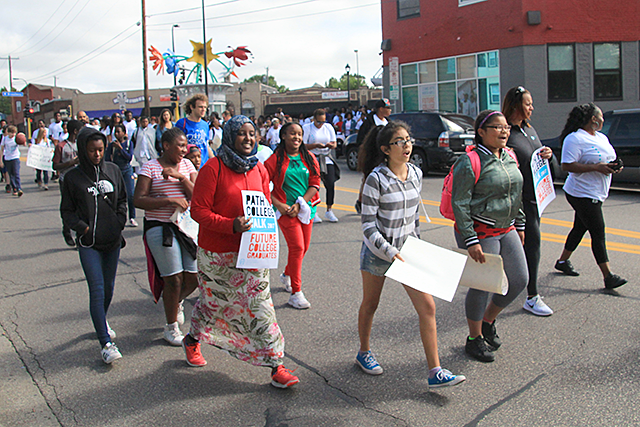 MinnPost photo by Erin Hinrichs
Those walking from the NAZ office elicited praise and honks of solidarity from passing traffic.

Not only does walking the route give students a sense of agency, he said. But ending at the MCTC campus also exposes them to new career pathways. If you’re a low-income family that’s lived in an apartment for four generations and there’s no father figure at home, he said, “You lose every connection to utilitarian trade careers.”

By taking the time to walk alongside students and exposing them to trades programs offered at a place like MCTC, Mike Christenson, a former city planner and former vice president of MCTC, says he hopes more youth will consider this career pathway. 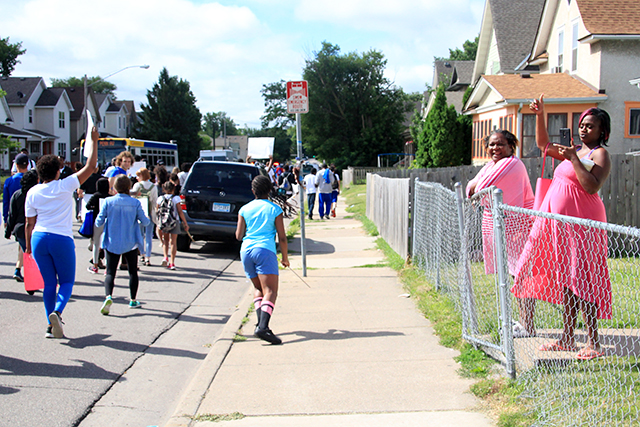 MinnPost photo by Erin Hinrichs
Northside residents cheering on the walkers as they walk through a Northside neighborhood.