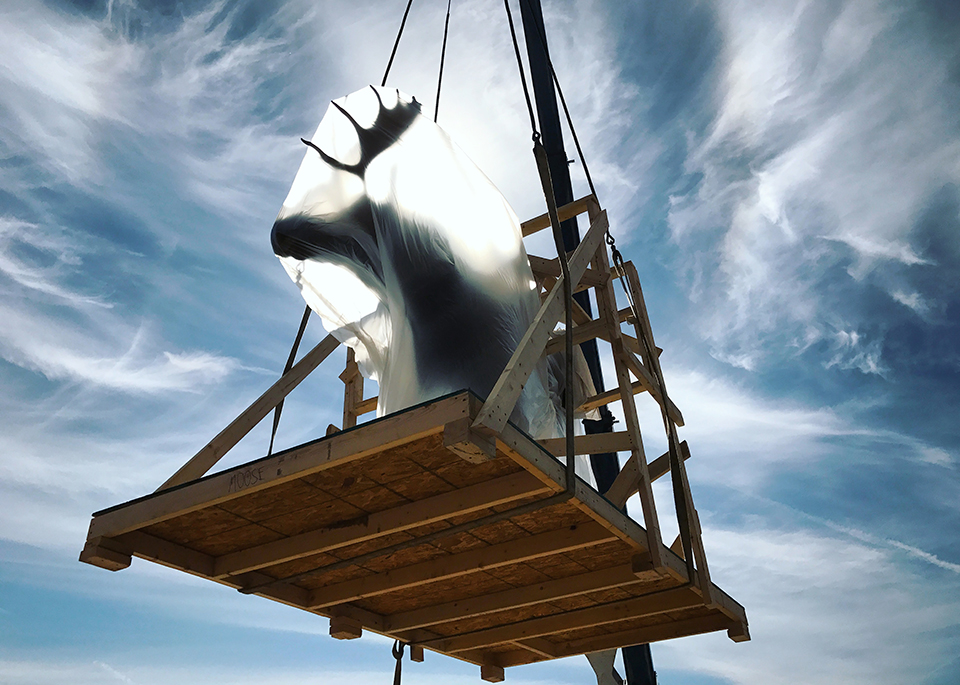 Courtesy of the University of Minnesota and Bell Museum
A taxidermied moose is hoisted off a truck at the new museum location.

Imagine you're moving. And that a lot of the furniture came in boxes and was assembled inside your old house. And now that it’s time to move, that stuff doesn’t fit through the front door. “And you’re wondering, why can’t I fit this out of the doorway now?” said Andria Waclawski. “The problem is, you never did.”

That’s what it’s been like to move the Bell Museum of Natural History — that is, if your “furniture” were massive, beloved historical dioramas and taxidermied moose.

The state's one and only natural history museum and its entire collection is moving from its home, built 77 years ago on the University of Minnesota's Minneapolis campus, to a new state-of-the art facility on the St. Paul campus. Other natural history museums have moved exhibits or specimens before, of course, but usually just from room to room in the same building.

This is different. In anticipation of the new facility's 2018 opening, the Bell Museum’s exhibits had to travel between two cities, across major roadways and through a pair of busy campuses. “There are no other projects that have moved dioramas of this size, scale, age and method of construction,” said Waclawski, communications director for the museum. “As far as we can tell, no other natural history museum has ever done anything like it.” 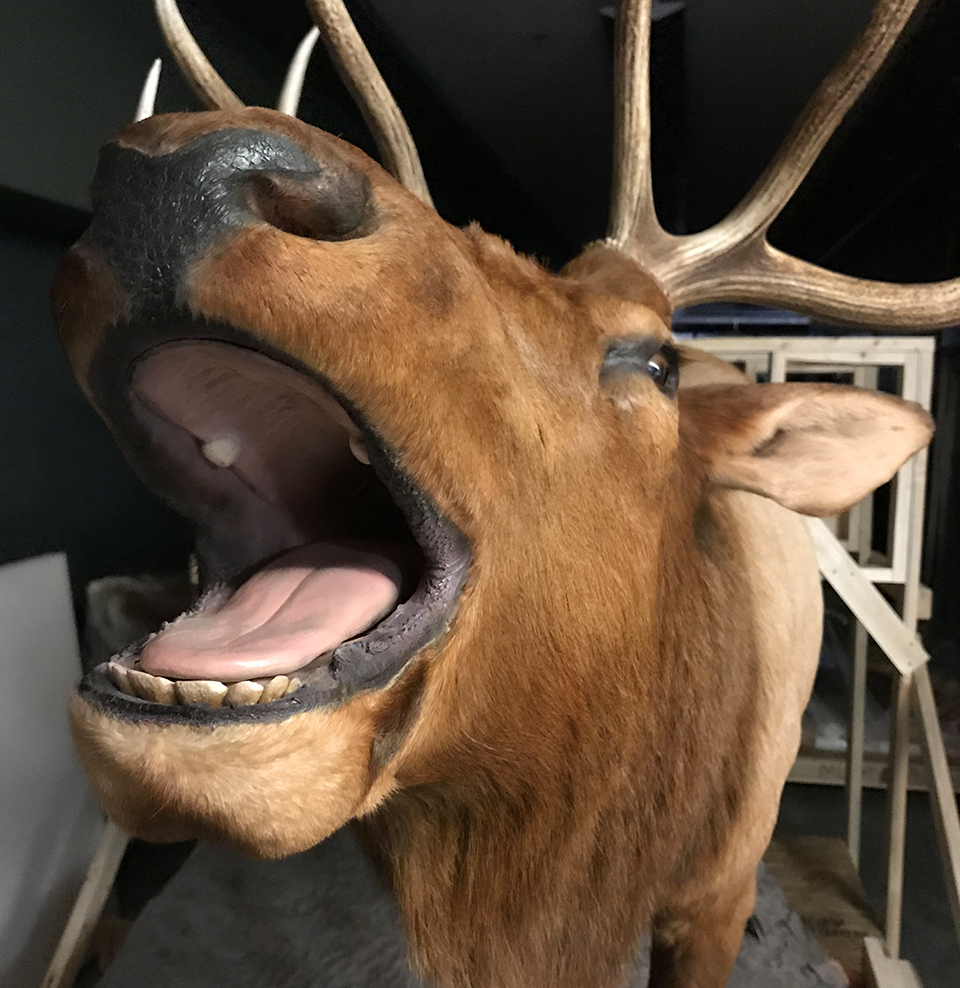 Courtesy of the University of Minnesota and Bell Museum
The museum's elk was cleaned before it went to the new space.

The first Bell Museum was constructed in 1940 — because of three taxidermied wolves. In the 1930s, Minnesota’s gray wolves were being rapidly killed off, and James Ford Bell, then the president of General Mills, was a passionate conservationist. He wanted a way to educate the public about the beauty of wolves in their natural habitat and, he hoped, stop them from being exterminated.

Minnesota legislators had passed an act creating a natural history museum at the University of Minnesota way back in 1872, but it was just a single room on campus with various specimens from around the state. Bell offered up half of the cost — $150,000 at the time — to construct an entire building on the corner of University Avenue and Church Street to house a wolf diorama and others, a building that would eventually be named after its benefactor.

To create the exhibits for the museum, the university was able to recruit prominent painter and Minnesota native Francis Lee Jaques away from his job at the American Museum of Natural History in New York. Jaques spent months building the dioramas — three-dimensional models using animals, plants and paintings to capture recreate real-life settings — inside the new building.

In the following decades, the exhibits expanded to 10 large dioramas, even as the building started to fall apart. Rodents — living ones, not part of the collections — had invaded the museum. The basement frequently flooded, and temperature fluctuations in the building threatened to damage the collections. 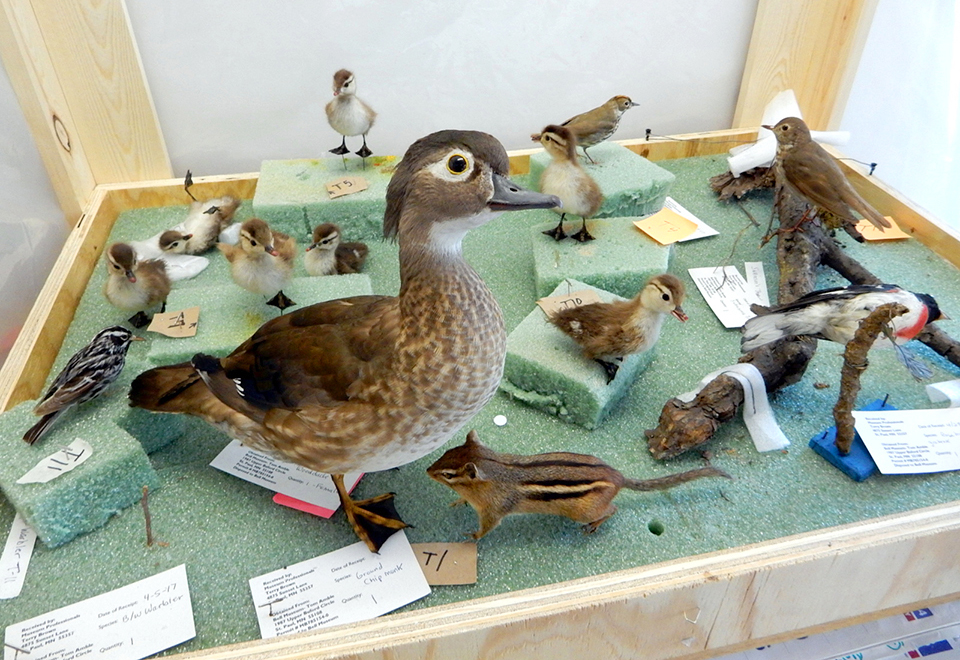 Courtesy of the University of Minnesota and Bell Museum
Specimens were cleaned and cataloged before they made the move.

Moving the collections was going to be difficult, but by the early 2000s, university officials also knew they couldn’t keep them in the their original home. The Minneapolis campus was already crowded, so plans were drafted for a new building on the university's St. Paul campus, which is home to the school’s College of Food, Agricultural and Natural Resource Sciences. It would be a perfect fit, they thought.

After a six-year fight at the Minnesota Capitol, lawmakers struck an agreement where the university would borrow $51.5 million for the project and the state would use cash to pay the debt service on the bonds over a span of 25 years. The university broke ground on the project on Earth Day, April 22, 2016.

Even as the museum itself became outdated, the dioramas inside were still considered to be some of the best in the nation. So when it came time to move, there was no question that the original dioramas were going along for the ride.

There was, however, plenty of debate about how to actually get them to the new building. That’s where Wolf Magritte came in. The company specializes in moving large-scale artifacts, everything from portions of Fort Dearborn to historical cabins and giant contemporary sculptures. 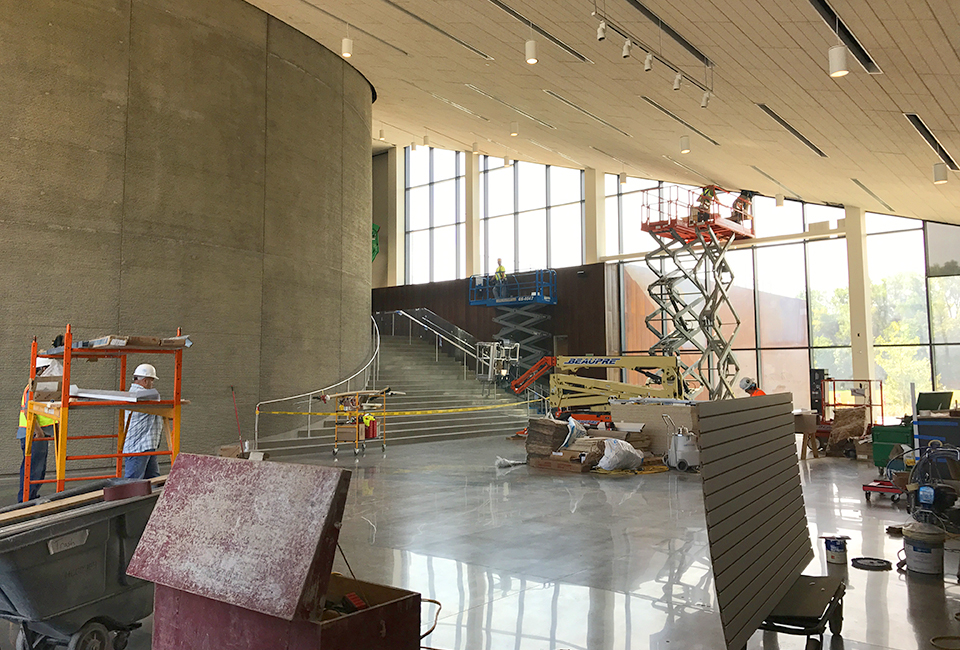 MinnPost photo by Briana Bierschbach
Front entrance of the Bell currently under construction.

But the Bell Museum provided plenty of new challenges. At first, crews thought they could remove the canvas paintings from the walls of the old museum and attach them to walls in the new space. But the paintings were so well-adhered — good job, lead glue — that they wouldn’t come off. That meant they would have to cut out the entire wall in chunks. But that was problematic, too. The dioramas were painted and constructed right into the old space, so cutting into them would be noticeable when it was all put back together. “These paintings were obviously never intended to move,” said Wolf Magritte's Luke Boehnke.

Ultimately, crews cut the diorama walls in areas where the cuts wouldn’t be as noticeable when put back together. Then they built a giant steel frame to lift large pieces of wall out at once. Ultimately, the lead glue that made it impossible to peel the paintings away from the wall was so strong that it actually kept the walls intact as they were lifted out of place. “Without it, I don’t think we would have been able to do it,” Boehnke said.

But there was another small problem: getting these giant pieces out of the building. The front door wasn’t going to be big enough, and the dioramas couldn’t be cut apart any more. So crews decided to cut a giant hole in the side of the old Bell Museum, facing right out onto University Avenue. After the hole was cut, crews rolled all 10 of the dioramas on steel dollies. 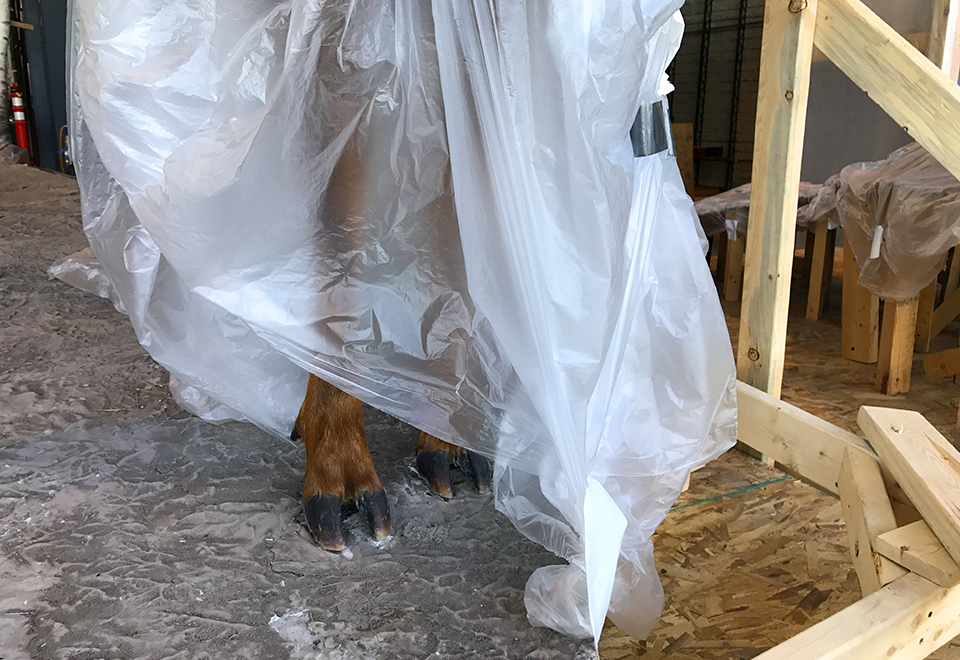 From there, covered in shrink wrap, the dioramas traveled on a truck to get from the Minneapolis campus to the corner of Cleveland and Larpenteur Avenues. Once there, the dioramas were lowered into another giant opening in the new building and rolled into their new home.

“That was part of the nervousness,” said Adrienne Wiseman, business & marketing director at the Bell Museum. “You can pull apart things and put the plants and animals back into place, but the paintings were really irreplaceable. They are masterworks.”

Home ‘for the next century’

On a recent Tuesday, a massive painting of a still Minnesota lake was floating in the air. Construction crews were carefully lowering the diorama until it landed in its final resting place in the new building. A taxidermied moose is supposed to stand in front of the painting, but it’s still shrouded in plastic somewhere else in the new Bell Museum.

On another diorama, which will eventually feature a large, bellowing elk, crews were peeling away tissue paper, washing over the wall with a light solution and filling in the lines where the painting was cut. New lighting — brighter than in the old, dark museum — showed them exactly what the public will see when they enter the building for the first time next year. 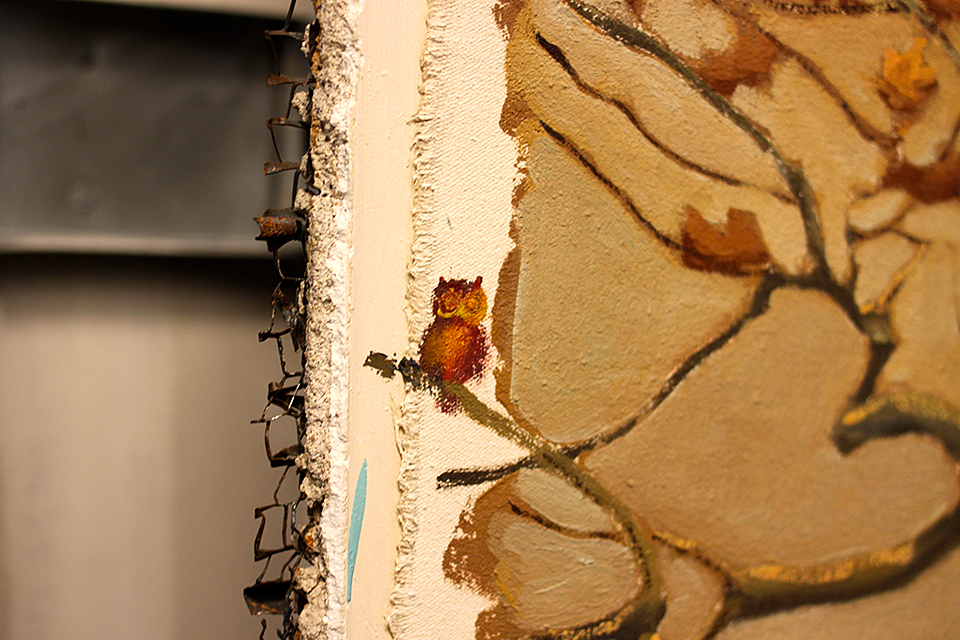 Crews were hurriedly working across the space, trying to meet a handful of construction deadlines this month. Work on the building is supposed to finish soon, with the exhibits set up and ready for the public next summer. The new museum will also include a planetarium in the center of the building, which is now just a dark room filled with steel beams that reach to the ceiling.

The new facility will also offer new interpretations of the old exhibits, and the dioramas will be organized by region of Minnesota, starting in the north. There will also be one new diorama: a walk-through exhibit taking visitors back 12,000 years, when woolly mammoths roamed the region and glaciers cut through to create Minnesota's modern environment.

For the museum's staff, the whole process has been revelatory. In removing the paintings, they were unsealed and cleaned for the first time since the building opened. Staff members had no idea how dusty and dark the paintings had become. Specimens were cleaned off to reveal their true colors, which were sometimes dramatically different from the way they’d looked in the museum for the last several decades. Jaques also painted little creatures, like owls, on the edges of walls that were eventually covered by pieces of diorama. 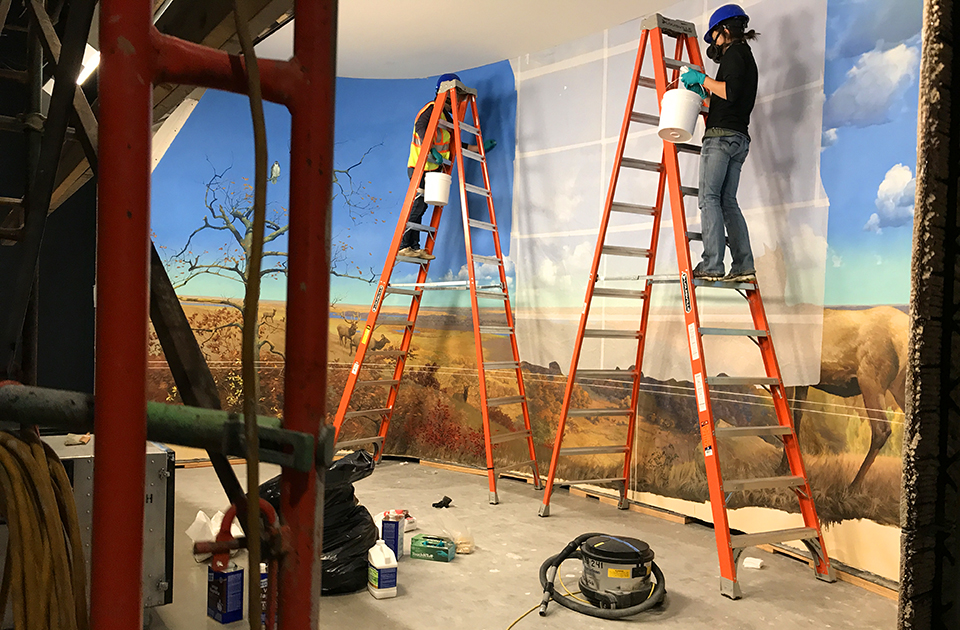 MinnPost photo by Briana Bierschbach
Crews cleaned the old diorama paintings before they put in the foreground.

“In our minds they were all hermetically sealed and preserved for the ages, but they weren’t," Weisman said. “There was dust and moisture issues behind the walls that we just couldn’t see.”

Some diorama enthusiasts have lamented the move. The Bell Museum was one of the best examples of the nation’s early natural history museums, and some people liked the dark, quiet charm of the old building, and feel something will be lost in the more modern space.

The old building will have a new life on campus, though what that will be hasn’t been finalized yet. And it's hard to argue that the old dioramas won't be safer and better taken care of in the new space, Waclawski said. “The environment is more controlled here, so they will be much better cared for, for a longer period of time, for a number of reasons,” she said. “This is where they will be taken care of for the next century.”