Before St. Paul Public Schools students return next week for the new school year, community members gathered Tuesday evening at a community forum to hear from school board candidates whose names will be on the ballot this fall.

That leaves three more contenders on the ballot: Andrea Touhey, an education consultant and former teacher; Luke Bellville, an attorney; and Greg Copeland, a Republican activist who’s unsuccessfully sought a number of other public offices before.

Only four of the six candidates attended the forum Tuesday evening, with Copeland and Bellville absent. The host of the forum, Students for Education Reform Minnesota — the local chapter of a national student-led education reform group — anticipated a full house, with close to 150 RSVPs. However, less than a third of them showed up for the event, which was held at the Amherst H. Wilder Foundation in St. Paul.

Students with the education reform group used community feedback they’d collected over the summer from St. Paul voters to help shape questions for the candidates. As reported by Naima Abdisalam, 18, a moderator of the forum, she and her colleagues knocked on more than 12,000 doors, made more than 19,000 phone calls and helped register more than 600 voters. “The goal of that was to ensure students and families are served by their local education system and that every student — no matter, race, income, background or anything else — receives equity in their education,” she said.

As they finish collecting and sorting through the surveys they conducted this summer, the group will be using this information to zero in on a handful of school-related issues, said Kenneth Eban, program director of the group’s local chapter. That list will drive their advocacy work this school year as they look to keep community members involved and hold the new school board accountable.

Brodrick, the veteran board member who’s been in office since Jan. 2002, is a lifelong Frogtown resident. He attended St. Paul Public Schools, worked as a teacher in the district and sent his own children there as well. He says the institutional knowledge and “lifetime love affair” he brings to the board is “vital,” especially during this time of transition, as the new Superintendent Joe Gothard looks to the board for context on what’s taken place over the years.

Foster is closing in on her first year of service on the board. She won her seat last fall during a special election, after former board member Jean O’Connell resigned in protest of her colleagues’ decision to fire former superintendent Valeria Silva.

A lifelong student and resident of St. Paul who experienced poverty growing up, Foster says she represents “a lot of the kids in our community.” She also stresses that she knows how to use student data and how to build collaborations.

With nieces and nephews in the district, she says her drive to improve outcomes for those who have traditionally been underserved strikes a personal chord. “I’m in this for the right reasons,” she said. 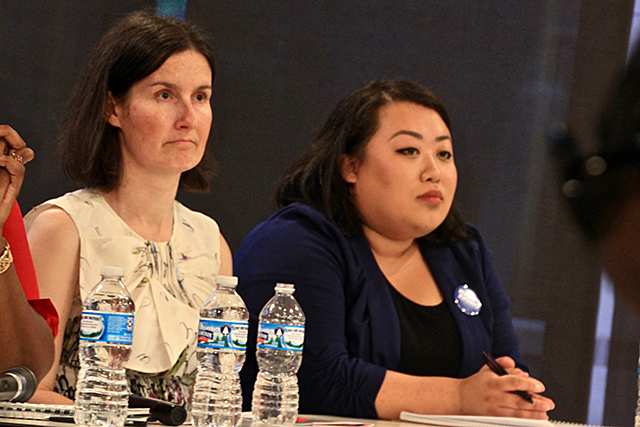 MinnPost photo by Erin Hinrichs
Andrea Touhey and Marny Xiong are also vying for the three open seats on the St. Paul School Board.

Touhey doesn’t have children in the district. She didn’t attend St. Paul schools. She grew up in Minnesota, in the western suburbs. But she spent nearly a decade working in public charter schools across the country. She’s hoping her outside experience will be viewed as an asset.

Xiong was born and raised in the Frogtown neighborhood. She currently works as a school manager at a magnet school in the Minneapolis Public Schools district, where she is in charge of managing finance, safety and operations for the school building. Similar to Foster, issues of poverty and race are personal for her. “I know firsthand, as a woman of color, how it feels to be not heard, ignored or locked out,” she said, noting she also grew up in poverty.

Asked to identify their top priorities for closing disparities in educational outcomes, Foster alluded to some of the things she’s already begun working to address. That includes working with staff and leadership across the district, as well as collective bargaining units, to break away from doing “business as usual.” Part of that work, as she noted earlier, is making a concerted effort to hire with an eye toward diversifying the administrative and teaching staff. She also wants to continue to bring more community groups into the schools to strengthen and broaden partnerships.

“You can expect, from me, to see a greater depth and level of engagement across the district,” she said. “Everybody’s going to have to change.”

Touhey called for more regular surveys, to collect feedback from parents, students and educators on a routine basis. She also said she’d push to improve instruction by encouraging teachers to pursue national board certification and make improving school climate a priority.

For Xiong, family engagement and community collaboration is the logical starting point. She also talked about prioritizing support for existing programs aimed at supporting students of color — like the various immersion programs, English learner programs and culturally relevant curriculum initiatives — as well as professional development for staff and teachers.

Brodrick called on the state Legislature to start investing more in Minnesota schools. He also talked about focusing in on the individual students and creating Individual Education Programs — individual plans typically reserved for special education students — to help track each student’s academic standing and progress. “We can’t just identify schools as performing poorly,” he said. “We have to home in on the most important thing.”

Correction: An earlier version of this story cited event coordinators saying that Luke Bellville had dropped out of the race on Tuesday. Bellville said on Wednesday that he is still in the race.

St. Paul school board candidates lay out priorities at forum