The need to diversify the teacher workforce garnered quite a bit of attention this past legislative session. State lawmakers heard from numerous educators who showed up on behalf of the Coalition to Increase Teachers of Color and American Indian Teachers in Minnesota to advocate for policies and programs aimed at removing some of the barriers that both prevent minorities from entering the teaching profession and  — for those who manage to become teachers — from sticking with it.

In Minnesota, students of color and Native American students make up nearly a third of the K-12 population. Yet many of these students are going through the education system with few — if any — opportunities to learn from and connect with an educator of color. That’s because, according to state data, out of the nearly 57,000 licensed teachers, only about 2,500 identified as Native American, Asian, Hispanic or black this past school year. In total, these teachers only account for 4 percent of the teacher corps.

The coalition — a group that formed in 2015 to coordinate teacher diversification efforts — celebrated a number of incremental wins this year, but their work is far from over. Fueled by over 700 members, the coalition held its second annual conference for current and aspiring educators of color and American Indian educators last week at Metropolitan State University in St. Paul. Attendees talked about everything from how minority students stand to benefit from ethnic studies programs to how their own racial and ethnic backgrounds impact their day-to-day experiences with students, parents and school administration.

During a panel discussion Thursday afternoon, attendees turned to a handful of standout colleagues for a sense of inspiration and solidarity. Four 2017 Minnesota Teacher of the Year finalists of color spoke about their own experiences overcoming barriers in an education system that “was never intended for racial diversity,” as finalist Adrian Davis put it.

Davis, a music teacher at Roosevelt High School in the Minneapolis Public Schools district, says he grew up in a musical family and always knew his passion for music would influence his career decisions. But he credits having music teachers of color, while growing up in Memphis, Tennessee, with planting the seed in his mind that education was a path he could pursue.

“I think I can say it, at a conference like this, that I had a teacher that was effective, as far as pedagogy, but that also looked like me. That was a major influence for me to go into music education,” he said.

Getting started, however, Davis says he had to surmount some unique challenges in a teacher preparation system — both in Memphis and in Minnesota — that end up deterring many potential teachers of color.

“Many of us went through teacher ed programs that were not culturally relevant at all,” he said. “So as a person of color, having to find myself in that curriculum or, in so many ways, having to navigate so I could get through the program, is a challenge in itself — as well as trying to bear culture and maintain culture in that system.”

Even though he’s now entering his 18th year of teaching, Davis says dealing with this “double consciousness” of staying authentic in a system that was constructed to serve the white majority is a “forever quest.” Doubling as his school’s equity lead, Davis says the ability to use music to completely disrupt the status quo is what keeps him grounded in this work.

“Music is an agent for pushing the agenda for social change,” he said, noting he often taps into student talent when planning for lessons and school concerts. 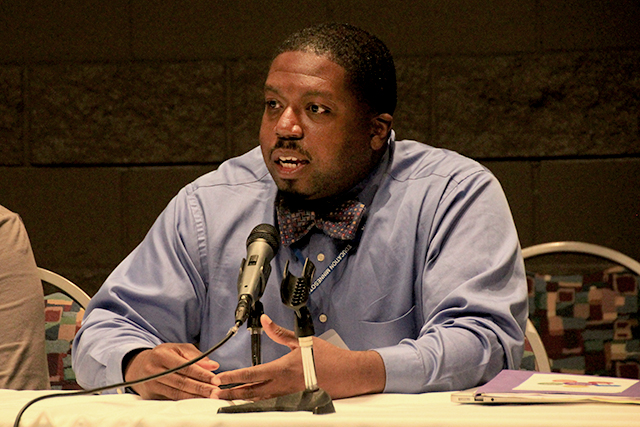 MinnPost photo by Erin Hinrichs
Adrian Davis says the ability to use music to completely disrupt the status quo is what keeps him grounded in this work.

For Ali Alowonle, a teacher in the Navigator Program for Exceptionally Gifted Students at Excelsior Elementary in the Minnetonka Public Schools district, the ability to envision herself as an educator didn’t take hold until she reached college. Having grown up in a small community with all white teachers, she struggled with an encroaching sense of self doubt and disconnect.

“I frequently left school. I didn’t want to be there. I did well in school, but I didn’t like it. I did not see myself as part of that system. From sixth grade on through high school it was very challenging and very isolating,” she said, noting that even once she connected with strong mentors in college, her teacher prep program experience still lacked diversity.

Now that she’s in a position to set students of color on a more productive path early on, she’s constantly advocating to make sure that these students are being identified to enter the school’s gifted program. She’s also working to ensure students are exposed to content from an ethnically diverse range of authors and musicians.

Heading into her 21st year of teaching, Ong Xiong also talked about the limitations of learning how to teach a diverse student population in a teacher prep system that’s historically catered to a white majority.

A product of the St. Paul Public Schools system, herself, Xiong says it was difficult growing up without a single licensed Hmong teacher in the classroom. In part, this lack of representation is the very thing that compelled her to pursue her teaching license. But even with the professional training under her belt, she’s very aware of its limitations as she works to develop a Hmong curriculum for the dual language program at Phalen Lake Hmong Studies Magnet school in the St. Paul district.

“I’m trying not to look from my ‘white lens’ — my educational background, my trainings. I’ve never had it from the lens of the Hmong perspective,” she said.

Seven years into building the program from the ground up, she’s still a bit overwhelmed with the sense of duty to translate new, interesting reading books and textbooks from English to Hmong so her students are able to access the latest content while also connecting with their native language. But once she realized how much Hmong-American students stood to benefit from a program that’s culturally affirming, she couldn’t put it to rest.

“The Hmong language and culture is an endangered language. When I talk about it, it becomes kind of emotional for me. When I was teaching in other schools I had my Hmong students, but … they usually didn’t open themselves up during the school day,” she said. “What I didn’t realize is they never really fully came in with their full selves because they had classmates that would judge them, they had other teachers who would not understand where they were coming from.” 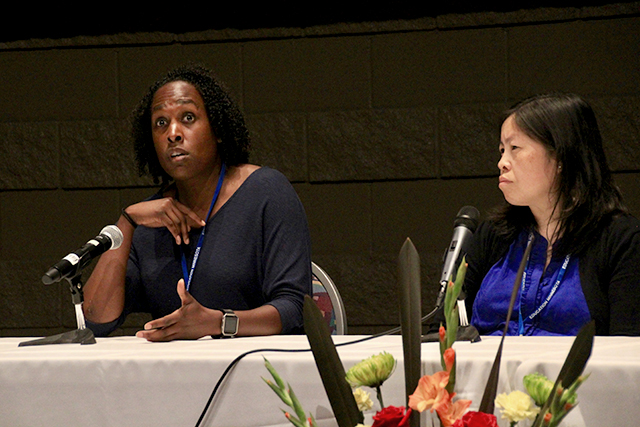 MinnPost photo by Erin Hinrichs
Teresa Stadem, left (with Ong Xiong at right): “When I first started teaching, I’d say I felt like I didn’t have the space to say what I knew would work for students of color.”

Teresa Stadem — an English language arts teacher at the Richfield Career Education Program, an alternative program run by Richfield Public Schools and Normandale Community College — says her calling to the teaching profession was always there, from an early age. The thing that threatened to derail her, however, was the resistance she encountered from other teachers and administration once she started acting in the best interest of her students.

“When I first started teaching, I’d say I felt like I didn’t have the space to say what I knew would work for students of color …. It took a few years before I felt comfortable enough to do what I wanted to do and apologize for it later,” she said, noting she eventually got to a place where she could back up her decisions with research.

But even then, she found that her colleagues and supervisors would still doubt her methods, even as student outcomes improved. This added burden of having to validate what she — a teacher of color — was doing differently inside her classroom has been the biggest challenge of her teaching career, she said.

“They’re thinking that I’m watering it down or just passing them,” she said, adding her response has always been a simple invitation to come visit her classroom. “Just come here and you can see it. And you don’t have to ask me anymore. And you don’t have to wonder like if I’ve got some special brown people wand that I’m waving around. I’m teaching a class like any other teacher would teach. I’m just adding pieces that these these kids can relate to, or that they see themselves in.”

Since being recognized as a finalist for Minnesota Teacher of the Year, Stadem joked, nobody doubts her methods anymore. But she’s under no illusion that her colleagues of color across the state will be able to piggyback on her success.

Her advice for teachers of color who are looking to advance equity? Don’t hide. It’s important for teachers of color to make sure they’re participating in equity meetings at their schools and in their districts, she said. Too often, these equity teams lack the diversity they aim to support. 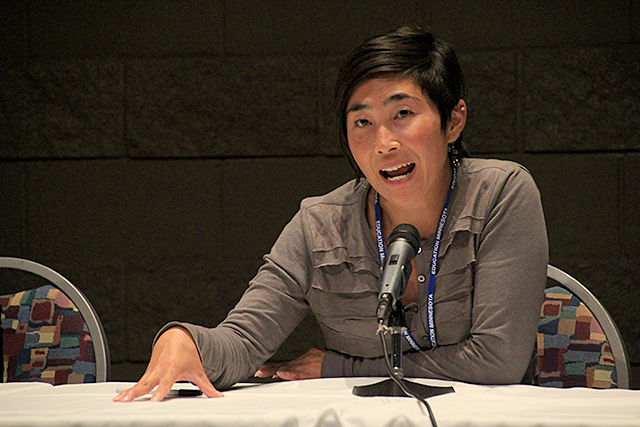 MinnPost photo by Erin Hinrichs
Ali Alowonle: “I did well in school, but I didn’t like it. I did not see myself as part of that system.”

Davis echoed her sentiments, calling on teachers of color to make a point to speak up and share their insight with their white colleagues. He later passed along a piece of old-fashioned advice from his mother coupled with a declaration of his own: “Plan the work and then work the plan,” he said. “Because in today’s 21st century classroom, ignorant privilege doesn’t have a place.”