Whoever’s elected to lead the city of Minneapolis for the next four years — whether incumbent Mayor Betsy Hodges or one of the 13 opponents vying to take her place — won’t officially wield any power over the public schools inside the city. But that doesn’t mean Minneapolis’ mayoral candidates don’t have anything to say about how to improve education in the Mill City.

To get a read on just how involved in school affairs six of the top contenders plan to be, if elected this fall, a group of 16 organizations sponsored a mayoral forum at North Community High School on Thursday evening. On stage were Rep. Rey Dehn, Al Flowers, Council Member Jacob Frey, Mayor Betsy Hodges, Nekima Levy-Pounds and Aswar Rahman. (Candidate Tom Hoch did not attend, citing a previous commitment.)

All six candidates were asked to weigh in on everything from how they’d use their status as mayor to influence things like discipline disparities and police in schools to how they’d help expand teacher diversity. Here’s a recap of the answers each candidate provided to those who filled the lower half of North High’s auditorium.

Rep. Ray Dehn, DFL-Minneapolis, began by pointing out his connection to North High. As a state representative, the school sits inside his district; and several years ago he says he stood alongside community members “that fought to keep this school open.”

“This community stepped up because a school is a critical anchor for a neighborhood,” he said. “If it had closed, the message would have been: ‘North Minneapolis no longer matters.’”

Asked to share his vision for K-12 education, under his leadership, Dehn said the mayor’s role is not in the classroom, but in supporting all the other things that impact a child’s life, like access to stable housing and resources offered through groups like the Northside Achievement Zone. A mayor’s role, he added, is to ensure greater coordination between groups serving youth, including the Parks Board, the school district, and the faith community.

“Adverse childhood experiences inhibit their ability to learn,” he said. “We need to make this community safe for kids in and out of schools. That includes cleaning up the environment in which many of them live.”

In his vision, however, that work does not include keeping police in schools. He said School Resource Officers need to be phased out because he views them as part of the criminalization of kids in our schools. “It’d be great if they worked for the Minneapolis Public Schools system, rather than the police department,” he said, offering an alternative approach.

Asked if he’d be in favor more mayoral control over the school board — a situation in which the mayor appointed all or some of the board members, who are currently all elected by the public — he said that’s not something he’d support. Rather, if school board governance becomes dysfunctional, he’d prefer to bring in outside support to help mediate.

He also touted his experience at the capitol, where education funding is negotiated. While he hasn’t served on any education committees, he says his comfort level at the capitol would allow him to advocate for funding to support initiatives to diversify the teacher workforce and  increase the number of school social workers and counselors.

Al Flowers, a community activist who has a long history of testifying at local school board meetings, began by acknowledging his tense relationship with the district. “I’ve been fighting  with Minneapolis Public Schools for the last 10 to 15 years about what we can do better in education,” he said. He spent the first half of the forum raising concerns he had with the role of education nonprofits — including Generation Next, which former mayor R.T. Rybak led for a period of time — contributing to a fractured landscape. He characterized them as unwilling to work together and said that many of them are competing for dollars to support Minneapolis youth.

On the topic of school safety, he cautioned against becoming lax on discipline. Citing the student assault on a former principal at Harrison Education Center, Flowers said he’s in support of police in schools — not to punish kids for using foul language, but to step in when things escalate.

Addressing the lack of teacher diversity, Flower said it boils down to the fact that “teachers don’t get enough respect.” He said there needs to be a push to glamorize teaching, to get young people — including students of color — to view teachers differently, so they’ll actually consider going into the profession. Part of that effort, he said, eliciting some chuckles from the audience, is “we need to hug some more teachers.”

Council Member Jacob Frey began focused mainly on the mayor’s role in helping youth outside of the classroom, whether it be through building more affordable housing so that they aren’t constantly moving from home to home — and school to school — or providing more opportunities for vocational training.

We need to stop pointing fingers at the teachers union, charter schools, nonprofits and school board members, he said, and “collectively point the finger inward.” He talked about the role city government has played in intentionally segregating communities, through the placement of highways and more. This has led to more adverse circumstances for youth of color, he explained.

“We know that communities of color are disproportionately exposed to trauma and poverty,” he said, adding it has an impact on kids’ ability to learn. 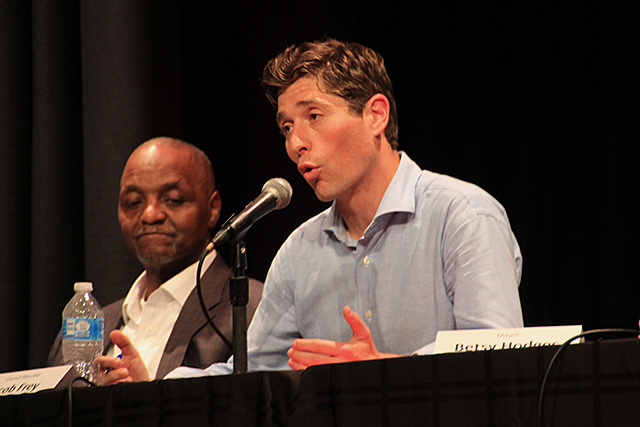 MinnPost file photo by Erin Hinrichs
Council Member Jacob Frey: “The mayor is in charge of safety and it hasn’t been going well.”

Addressing the added pressure many urban teachers are under because of teaching youth who are stressed by poverty and trauma they’ve experienced outside of school, he proposed providing these teachers with more resources, including higher compensation. “Am I saying teachers on the Northside can get paid more? Yes, I am,” he said.

Regarding police officers in schools, he talked about the need for a cultural shift in the police department as a whole. “The mayor is in charge of safety and it hasn’t been going well,” he said, criticizing Mayor Betsy Hodges, who was sitting to his left. He asserted that the tensions around police in schools could be resolved by fixing the public’s perception of police in the community through a mayor with a clear vision, who’s willing to “not pass the buck.”

Hodges, who’s running for re-election, said she also does not want kids fast tracked into the criminal justice system via contact with police officers at school. But she said the decision to contract with police lies with the school board. And there is an opportunity to use police in schools to build stronger community-police relations, which could lead to fewer 911 calls coming out of schools, she said.

“We have listened to community concerns,” she said of School Resource Officers. “And they are getting training on youth and child issues.”

Addressing racial disparities in discipline, Hodges talked about the need to reduce suspensions, which take students out of the classroom and disrupt their learning. She gave a nod to former superintendent Bernadeia Johnson for banning the suspension of elementary-aged children, “which is just a ridiculous notion,” she said.

As mayor, she talked about leading with an understanding that the city’s diversity is increasing and that means setting all youth up for success is critical to the city’s future. That work includes bringing people from different education sectors and political viewpoints together to support youth through things like her Cradle to K early learning initiative and the AchieveMpls program. She also talked about her involvement with the Northside Achievement Zone, which is working to close the belief-and-expectation gap that’s hampering the potential of so many Minneapolis youth.

In terms of school governance, she pointed out how much the people of Minneapolis “love government.” So rather than tamper with school board governance, she said, she’d focus on investing more in equipping school board members — and candidates who are running to serve — with more training so they can do their job well. People often forget the superintendent’s job is to manage and lead, while the board’s job is to govern, she said, and “when we don’t have boundaries around that … students pay.” 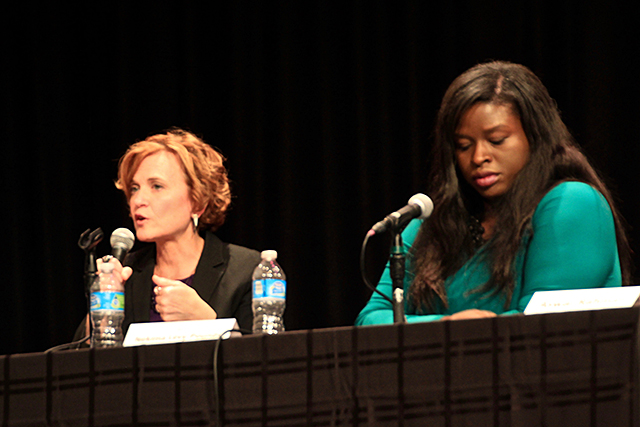 Nekima Levy-Pounds, a civil rights attorney and former law professor at the University of St. Thomas, seemed most confident sitting on stage at North High, addressing issues of race and equity in Minneapolis schools. She’s advocated at school board meetings — notably, leading a protest at a board meeting that forced the school board to restart a failed superintendent search — and filing a legal complaint over the treatment of a former student enrolled at Harrison, a last-resort option she’s likened to a prison. Harrison needs to be shut down, she said.

“I know how to wield that bully pulpit,” she said, reciting her track record.

She called for a system-wide change that’s long overdue. “When you are coming from a very culturally rich background, when you are experiencing poverty, it’s important to redesign the system to make sure we are being inclusive,” she said, noting that includes diversifying the teacher corps, incorporating more student voice into decision making, and adopting a more culturally responsive curriculum.

In her responses to the facilitators’ questions, Nekima first objected to the deficit-based language most use when talking about Minneapolis youth. “As someone who grew up in poverty, it’s extremely offensive to hear these notions of PTSD … that send the message that if a child is growing up in poverty, he or she will not be able to graduate,” she said.

Listing some specifics, she called for the need to expand programs like the Grow Your Own program in the Minneapolis district, that’s bringing more teachers of color into the profession. And the need to protect those teachers from layoffs, during budget cuts. She also said the school board would benefit from having two additional seats — one for a parent and one for a teacher.

On the issue of police, she said they do not belong inside schools. When kids start racking up criminal records as young as age 10, she said, they suffer collateral consequences that follow them into adulthood, as they struggle to find housing and employment. “We’re already cutting off their future when we use police officers,” she said, adding district resources would be better spent hiring more student support personnel and investing in restorative justice programs.

Aswar Rahman, a filmmaker and developer, pointed out that he’s a product of the Minneapolis Public Schools system. As a minority raised by a single mother, he positioned himself as one who could relate to many of the issues being raised about educational disparities in the local education system. 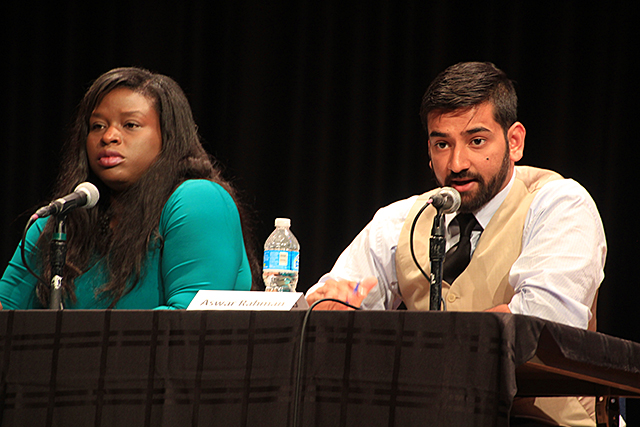 When it comes to wielding influence over education, Rahman stuck to two main levers the mayor has access to: the police and the budget. Primarily sticking to two specific, he promised he’d invest funds into providing childcare for every low-income Minneapolis family, especially for single-parent households. He also talked about redirecting city resources to ensure all students have access to free vocational training offered through the Minneapolis Community and Technical College.