For Mary Texidor and her two preschool-aged children, story time has long been a part of the bedtime routine. As of a few weeks ago, however, books have become a tool for teaching more than literacy skills.

Following an early learning prompt she received via text message on her phone, she started asking her 3-year-old, Jeremiah, to read characters’ feelings. If they appeared upset, she’d ask him what they could do to make them feel better.

Initially, she didn’t place much stock in the exercise. But a few weeks later, Jeremiah proved just how influential those simple teaching moments can be. While Mary was reading to her younger daughter, Audra, he walked over to listen and pointed out that the spider — a lonely hostess — was sad. When she asked what they could do, he replied, “We could go to her tea party.”

It was all the proof Mary needed to start promoting the free early learning texting program to her friends and family members. The program, called Think Small ParentPowered Texts, aims to help ensure all youth are kindergarten-ready by equipping parents with bite-sized tips on how to better support their child’s development in the areas of health, literacy, math and social-emotional learning.

“If all of us were using this, what a far-reaching impact it would have,” she said, noting Jeremiah has already begun applying his empathy radar at the playground, where they’ll talk about how other kids might be feeling and what he could do to help.

The folks at Think Small, a Minnesota-based early education nonprofit, believe this new tool could help close some longstanding educational disparities in the local education system. For instance, studies show that by age 4, children from low-income families hear 30 million fewer words than their more affluent peers. This so-called “word gap” can put youth at a disadvantage that’s difficult to overcome, even as they move from one grade to the next. And regardless of socioeconomic status, considering the fact that 90 percent of brain development happens before age five, all youth stand to benefit from more guided learning activities.

The Think Small ParentPowered Texts program launched this summer and already has more than 2,000 users. Given the fact that the tool is free and research-based, both in its design and content, the folks at Think Small are working to get it in the hands of every Minnesota parent. On Oct. 10, they’re co-hosting an informational session at the Amherst H. Wilder Foundation, from 4 to 5:30 p.m., to promote the texting program.

“We think it’s an easy model to get into families’ hands — parents, grandparents, caretakers, anyone who’s really touching the lives of children — to engage with children more intentionally,” said Cisa Keller, senior vice president for early childhood quality development at Think Small. “The texts, themselves, are very simple. They don’t require any prep. You can do them right where you are.”

The Think Small ParentPowered Texts program is modeled after a similar program that piloted in the San Francisco Unified School District during the 2012-14 school year. Encouraged by early signs of success, the folks at Think Small teamed up with Ben York, a Stanford University doctoral graduate who co-created the original texting program, to tailor the texting program to meet the needs of Minnesota families.

The Minnesota version was built for children ages birth to 5 and covers health and social-emotional skills, in addition to literacy and math, making it one of the most comprehensive early learning texting programs available. It’s currently available in English and Spanish, and will soon be available in Somali as well. 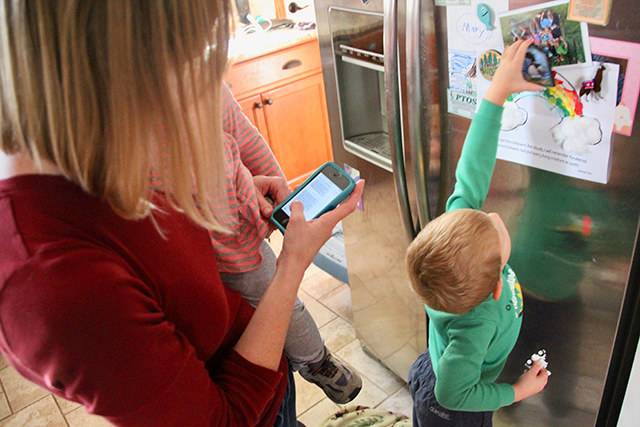 Parents who want to enroll (online form available here) just need to provide their mobile phone number and their child’s birth date. Think Small advises parents to register only one child per phone, for ease of use. Soon after enrolling, they’ll start receiving three texts messages each week with information and actionable items that are aligned to Minnesota’s Early Childhood Indicators of Progress, the state’s early learning standards.

The three-text sequence design is grounded in health and behavior research, says York. Each Monday, participants get a text with a fact that’s designed to close the information gap and to motivate parents with respect to the skill of the week. “If you promote a particular activity, it’s important to say why that activity is important,” York said.

On Wednesday, parents get a tip message that includes a recommendation for activities that promote child development. The key, here, is that these suggestions are designed to fit into everyday activities, like bath time and grocery shopping, so they don’t end up sitting on a ‘to do’ list.

“The idea is to show parents fun and easy ways to make the most of the things they’re already doing with their children, as opposed to asking them to adopt whole new routines,” York said.

On Friday, participants receive a growth message, something that reinforces the skill of the week, offers some encouragement and gives them an idea for how they might extend this learning opportunity to other everyday activities.

The design is also rooted in parent engagement research, as well as research on promoting positive health behaviors. But perhaps the most attractive aspect of the new texting program is its bare-bones interface.

“There isn’t a learning curve,” York said of the platform, noting there’s no app to download and to figure out how to use. “It’s also nice because your text message inbox becomes a digital library of parenting activities, whereas like push notifications in a mobile application are more ephemeral.”

Scrolling through her olds texts, in their home near Minnehaha Park, she began listing out some of her favorites: a lesson on sharing, a lesson on using two words to describe items in the shopping cart at the grocery store, a tip to start giving two-step directions. She doesn’t use every single tip, she says. But she looks forward to getting her messages each week because it’s far more manageable than trying to sift through online parenting tips on her own.

“As a parent, I know all the things I want to teach my kids, but it can be overwhelming,” she said.

Hearing a text alert go off on her phone, she said that was probably their final tip of the week — an activity suggestion that’s become a hallmark of their Friday afternoons together. “We have fun with these tips,” she said.