Earlier this fall, state Rep. Ilhan Omar made the cover of Time magazine for becoming the first Somali-American Muslim to become a state legislator. Just last week, an even younger Somali-American female became the first in the state — if not the nation — to be elected to serve on a local school board, in the Hopkins Public Schools district.

Fartun Ahmed, 26, won one of three open seats that were vacated by retiring board members. Her historic victory may not have brought the same level of attention, but its significance hasn’t been lost on her.

“I had a lot of people call me — a lot of current political leaders in the Somali community who are in Minneapolis — and say, ‘Good luck! You’re doing something big. You’ve got a lot of courage to do this … out in the suburbs,’” she said. “People really, truly believe it can’t be done. People believe that white suburbia won’t vote for a person of color. That’s just mind-boggling for me because I feel like I’m a part of this community. I grew up here.”

As she sets out to help elevate the voice of minority families in a district that’s 45 percent students of color (21 percent of which are black, a subset that includes both African-American students and East African students), Ahmed will have the support of two campaign partners, who also won seats on the board: Jen Westmoreland Bouchard and Chris LaTondresse.

Competing in a five-way race, the three newcomers ran a solidarity campaign that landed them 80 percent of all the votes, with each winning candidate taking home at least a quarter of the votes — results that offer a unique example of candidates generating support for creating a board that’s more reflective of the student body it represents.

“What I saw come out of the conversations is a better understanding of representation and why it’s important,” Westmoreland Bouchard said, adding that Ahmed had become a role model for all students, including her own daughter. “We have white kids across the district looking up to Fartun, and seeing her as someone who personifies excellence.”

All three newly elected Hopkins board members attended district schools, from their elementary years through high school. But their experiences, growing up, were very different from one another.

Westmoreland Bouchard, 38, grew up in a household that was well-connected to the schools; her mother spent 28 years working for the district. As a young adult, she moved abroad for a stint to work in the international education sector. But she decided to move back home with her husband to start a family because she recognized the district’s growing diversity as an asset. “There are more than 50 languages spoken in the district,” she said. “For me, that’s like a gold mine.”

She currently teaches at Normandale Community College, where she specializes in French, interpretation, and intercultural competency trainings for both students and staff. Reflecting on her professional experiences, she says there’s a lot of great work currently being done in the district. But she felt more needs to be done to bridge the cultural disconnect, starting with more on-the-ground work breaking down misperceptions.

So when her mother introduced her to Ahmed in February, the two began by hashing out how their own experiences in the district had been very different. From there, they hosted a group of Somali mothers at her house, to continue the cross-cultural education conversation they’d begun.

Impressed with Ahmed’s credentials and ties to the community, Westmoreland Bouchard says she initially decided to back Ahmed as her campaign manager. When it became clear that there would, in fact, be more than one open seat, the two decided to team up. 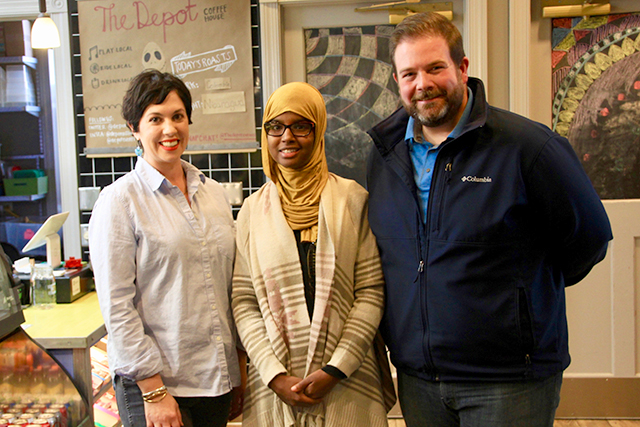 Ahmed, a chemical health assessor at a local detox center, is the eldest of eight children in her family. She can count on one hand the number of students of color who were in her classes during her time as a student. Today, she has siblings in the district who are in classrooms that are much more diverse, she said.

She left Hopkins for a couple of years to attend grad school in Chicago, but moved back home to stay a part of the community she grew up in. She’s long been active in the local Somali community, she says, by helping immigrant parents navigate a school system that is foreign to them and advocating for affordable housing.

Through this work, she’d become a regular at planning commission and Hopkins City Council meetings. That exposure — combined with the anti-immigrant rhetoric of the Trump administration, encouragement from many in the community, and questions from new immigrant families enrolled at her parents’ child care center who’d begun asking how to open enroll their kids in different districts  — convinced her to run for a seat on the board.

“I feel representation is really important,” she said. “I do believe in the excellent district that the Hopkins district is. I believe a lot of what our families are trying to navigate are small misunderstandings.”

LaTondresse, 35, joined forces with the two women over the summer. The son of a district teacher (who taught Ahmed), he had also moved away for work and come home to raise his child in the district that had served him well. He considers the district’s growing diversity an asset, he said, adding he also felt compelled to get more civically engaged in the wake of the last presidential election.

As the vice president of marketing for the Expectations Project, a group that does education equity advocacy work nationally, he helped amplify their campaign message.

“Our campaign represented the idea that communities from diverse backgrounds — but with a shared love of this place and deep roots in Hopkins — we are the Hopkin experience, the Hopkins story,” he said, adding “that when people like that come together, we can move the community forward.”

On the campaign trail

The Hopkins Public Schools district boundaries cut across seven different cities. According to a 2017 residential survey of district families, commissioned by the district as it was looking to put referendum requests on the ballot, 86 percent of “likely voters” in the district are white and 77 percent are “financially comfortable.”

Given this context, the trio wagered they’d boost Ahmed’s odds of being elected if they were diligent about being seen out in the community side-by-side with one another, to model their vision for a more representative board.

That work entailed hosting more than 14 meets and greets, canvassing more than 5,000 doors, and knocking on over 2,000 doors  — all of which took place not just where the polling data told them the likely voters lived, but everywhere. That included meeting potential voters at their homes, day care centers, the high school and adult community education classes.

Westmoreland Bouchard says this face-to-face approach was incredibly effective at opening up some meaningful conversations that may not have happened otherwise. For instance, she said that while door knocking with Ahmed, a lot of long-time residents recognized her as the granddaughter of a local family doctor and then quickly turned their attention to Ahmed, wanting to hear about her experience in the community.

“I ended up in a lot of homes because of this campaign. That probably would not have happened, especially in a community where … there’s a lot of fear of the unknowns, of this person who’s different than you,” Ahmed said, reciting negative stereotypes of Muslims that often make the news. “A lot of people were curious and yearning for this, but just didn’t know how to go about it, or find it.” 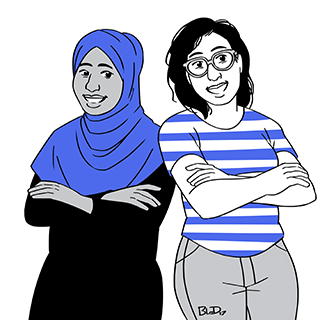 Blue Delliquanti
A number of campaign materials featured this illustration
of Ahmed and Bouchard.

In a similar way, Ahmed served as a gateway for her campaign partners to connect with the Somali community. Westmoreland Bouchard says they found that focusing on their shared experience as parents proved a simple way to connect with many Somali parents. And that fact that they were willing to take the time to meet with families went far in earning their trust, Ahmed said.

“People in my community have probably never met a board member until now,” she said. “Forming that relationship with Chris and Jen opened this line for them to be able to connect and feel they have someone they can reach out to.”

Unlike public school board races in the Twin Cities, all three candidates ran without any endorsements from a political party or the local teachers union. Rather, they coordinated their time and effort — a move most campaign strategists might caution against, says LaTondresse — to improve their odds of crossing the finish line together.

“Our operating theory of the race was that Fartun would face really significant headwinds in getting elected to the Hopkins school board. Right up to election night, we knew we’d put in the work but didn’t have a good sense of what the results would be,” LaTondresse said. “I’d never been happier to come in third for anything in my life. It showed how much the community was open to change, how much it responded to a unity message.”

A model of inclusion

Westmoreland Bouchard says she’s glad she dismissed a piece of advice she’d received early on — to stay away from controversial topics. “I felt we deserved better than that,” she said, noting the results support her intuition.

Recounting the election night party they held at a local brewery with their diverse group of supporters, Ahmed suspects it was the first time many in the Somali community had participated in an election party — not to mention likely the first time many Muslims had stepped foot inside of a brewery.

“People would never have been in that room, if not for a campaign that united all these people,” she said. “That signifies, at least in the community we’re seeing, a willingness to bridge these differences, go into new spaces.”

As the three transition to their new roles on the board and get to know the other board members, LaTondresse says they’ll bring a shared sense of vision and values to the board. But when it comes time to prioritizing initiatives and working out logistics, they all feel empowered to vote as individuals.

He adds they intend to keep many of the tactics they used on the campaign trail alive while in office, to help ensure a diverse range of community experiences are being considered at the decision-making table — especially when the student body is becoming more diverse, but that change isn’t well reflected in district leadership.

“Hopkins isn’t alone in trying to navigate these changes,” LaTondresse said. “I do think Hopkins is well-positioned to lead through these changes and even be looked to as a role model of what it looks like to lead well.”