A few weeks ago, two former Minnesota teachers joined U.S. Secretary of Education Betsy DeVos’ colleagues in Washington, D.C., to make a case for rolling back Obama-era guidance on student discipline. This Friday, a handful of Minnesota educators, advocates and parents will be making that same trek to offer a counterpoint argument at a public hearing before the U.S. Commission on Civil Rights.

The guidance in question, issued via a “Dear Colleague Letter on the Nondiscriminatory Administration of School Discipline” in 2014, laid out the fact that students of color — African-American students, in particular —  are disproportionately impacted by exclusionary discipline policies and practices. Research has shown that such gaps cannot be attributed to students of color simply acting out more frequently or in more extreme ways, the letter says. Rather, the discipline data and research suggest that students of color are being held to different standards when it comes to behavior expectations.

“In short, racial discrimination in school discipline is a real problem,” read a line in the letter.

This translates into a disproportionate loss of instructional time for students of color who are sent out of the classroom, often for subjective infractions like defiance. Framed as a civil rights issue — since studies have linked exclusionary discipline policies and practices with adverse impacts on students’ trajectories like reduced engagement and academic achievement, and an increased likelihood of dropping out and ending up in the juvenile justice system — the letter lays out guidance to “ensure that all students have an equal opportunity to learn and grow in school.”

In recent years, the U.S. Department of Education’s Office for Civil Rights has played a pretty significant role in singling out Minnesota districts that have discipline disparities and then holding them publicly accountable for taking steps to reduce those disparities. If, in fact, the feds plan to take a less aggressive stance on this issue, where does that leave Minnesota schools? Or, more important, where does that leave students whose access to the classroom may be unfairly impacted by a teacher’s implicit or explicit racial bias?

The two Minnesota representatives who flew to D.C. to voice concerns over these Obama-era guidelines have been critics of local attempts to reduce discipline disparities. Former St. Paul teacher John Ekblad sued the district last year after suffering a concussion and traumatic brain injury from a student assault. Former Edina teacher Debbie York also resigned after allegedly being injured by a student. Their testimonies support the opposition’s narrative: that increased pressure placed on teachers and administrators to keep misbehaving students in the classroom, in order to meet “racial quotas,” has backfired to the point of becoming a safety issue.

According to media reports, Michael Petrilli, president of the Thomas B. Fordham Foundation — which participate in the meeting along with the Center of the American Experiment in Minnesota, a conservative think tank — confirmed that both Minnesota teachers shared their stories, in a pitch to rescind the federal guidance.

Minnesotans of a different mindset will soon be making their case before federal officials in D.C. at a public hearing before the U.S. Commission on Civil Rights, which is scheduled for Dec. 8. The Minnesota chapter of Educators for Excellence will be sending a teacher who works in the Minneapolis Public Schools district. Ed Allies, a local education reform group, will be represented by Josh Crosson, its senior policy director. And the local Solutions Not Suspensions campaign will send parent and community representatives, with the support of travel scholarships from the Dignity in Schools Campaign, its national parent group.

“I think the narrative that’s coming from some of these teachers around the violence perpetrated against teachers aligns really well with the current administration’s thinking. So rather than having a broad listening session of folks that are impacted … they really hand-picked the voices they wanted to hear in order make a decision about federal discipline guidelines, knowing they didn’t include the folks who are most impacted by the disparities that are outlined in the guidance,” said Marika Pfefferkorn, co-chair of the Minnesota-based Solutions Not Suspensions group and board member of the Dignity in Schools Campaign.

She says any attempts to roll back the prior administration’s discipline guidance could come as a huge setback to all of the work that’s been done to shift the conversation from one focused on the misbehavior of students to one that’s focused on the disproportionate reactions of teachers.

“When you don’t have federal guidance, it’s easier for our local Department of Education to not take it as seriously,” she added. “There is no mandate that says school districts have to do this. But what it does is demonstrate the expectation and gives you a roadmap. This has been happening for quite some time, but we hadn’t been collecting the data, so people didn’t want to believe that it existed. Now that we have data that negates the negative narrative around black children, they want that to be erased.”

Shining a light on local disparities

In recent years, the U.S. Department of Education’s Office for Civil Rights (OCR) has heightened public awareness of discipline disparities in Minnesota districts — notably, the Minneapolis Public Schools district and the Rochester Public Schools district. In addition to analysing discipline data, the federal office continues to monitor districts as they work on taking steps to reduce these gaps, as outlined in the voluntary resolution agreements they entered into.

The report goes on to flag other patterns in the discipline data and spelled out some examples of how discipline measures were being enforced in an inequitable way. For instance, the OCR investigation called out instances of “assigning a white student being sent to an alternative instruction room for fighting with another student, while suspending out of school for one or two days four black students who engaged in similar fights.”

In accordance with the agreement, the district revised its discipline policies at the start of the 2014-15 school year and took a number of other concrete steps to reduce discipline disparities, including the establishment of positive school-wide engagement department — with teams at each individual school site — and placing a moratorium on K-5 suspensions for nonviolent behavior.

As the district enters its fourth year of working with the OCR, Michael Thomas, the district’s chief of schools, says inconsistencies in how discipline data is collected at the district, state and federal levels continue to present a challenge. Because of the incompatibility between systems, he says, the district’s’ discipline numbers may end up looking worse than they really are. 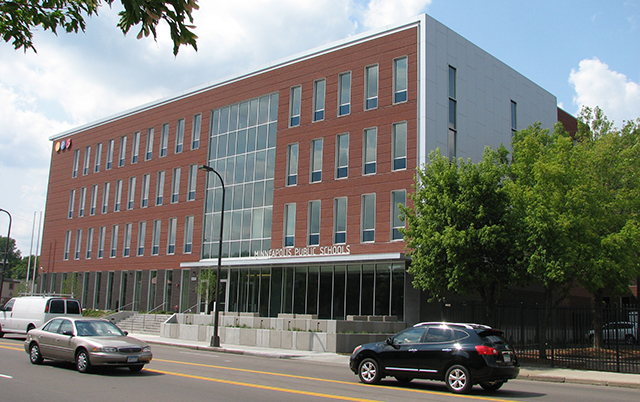 Beyond that frustration — which has been voiced by administrators in other districts as well — Thomas says the district has been on time with submitting progress reports to the OCR and is “on track to probably ending the relationship,” given the progress they’ve made.

“What I think it did for us is it opened up the conversation — both internally and with the community — around how we can improve,” he said. “They didn’t shine a light on something that we weren’t already addressing. But I think with OCR, through their questioning, it allowed us to reflect in a very different way, or a deeper way, to get some different responses. So I think it’s been helpful.”

A quick look at discipline data from the 2015-16 school year, as presented in the state’s self-reported Disciplinary Incident Reporting System, or DIRS, shows that racial discipline disparities still plague the district. While black students only made up 36 percent of the student body, they accounted for 78 percent of all out-of-school suspensions for one day or more, expulsions and exclusions.

At the start of the 2015 school year, a similar OCR investigation into discipline disparities in the Rochester Public Schools district resulted in a voluntary resolution agreement as well. Disciplinary data revealed that during the 2013-14 school year, black students were the subject of 39 percent of all disciplinary incidents, even though they only represented 13.7 percent of the student body. Further breakdown of discipline data revealed how black males, in particular, were disproportionately subject to harsher disciplinary measures, including for subjective offenses such as defiance and disruption.

The report notes that the district was in the midst of fully implementing a Positive Behavior Intervention System (PBIS), which includes restorative justice methods such as peer mediation and peer/faculty mentoring programs. Regardless, the OCR investigation and agreement prompted the district to agree to take a number of other steps toward reducing racial discipline disparities, including additional review of discipline data.

According to the most recent DIRS data, last school year black students accounted for 39 percent of all out-of-school suspensions, expulsions and exclusions, yet they only represented 12 percent of the student body.

Kolloh Nimley, an outspoken critic of the racial discipline disparities in the Rochester district who formerly worked for the Rochester-based state office of the Council for Minnesotans of African Heritage, says even with the OCR involved, the district hasn’t done enough to improve lines of communication between school officials and the parents of color whose children are being disciplined.

“The [progress] report being submitted to OCR is not totally honest, when the district says, ‘We’re doing this and things are getting better,’ but they’re not,” she said. “I’m not sure if it takes another parent to file a complaint and start over, or if people are throwing their hands up in the air. … it shouldn’t be that way.”

While a district spokesperson didn’t return a request for comment, Nimley’s observations don’t bode well for continued progress on this front if, in fact, the feds end up taking a step back from this work.

“I think it’s very, very good that Minnesota has representatives to go testify at the federal level because Minnesota has been viewed, at the national level, as one of the leaders in everything that we do,” she said. “But we have to make it very clear that we do still have things that we need to work on, and those disparities that need to be addressed. To do that, Minnesota needs to be the one to come up with a solution on how to address those issues.”