As the national news cycle continues churning out stories of sexual harassment allegations taking down adult males in positions of power, a lot of agencies have responded with promises of implementing new mandatory sexual-harassment trainings. These measures may dissuade adults from engaging in inappropriate behaviors. But it seems unlikely that any mandatory training is really capable of changing mentalities at the root of these sorts of social issues.

Caught at this juncture, it seems wise to look at what’s being done to better prepare our youngest citizens for a world where everyone — no matter their gender, skin color, religion, or any other part of their identity — is treated with respect and dignity.

The YWCA Minneapolis — established in 1891 — has been at the forefront of this work for years. At all five of its early childhood education program locations in the Twin Cities, children are exposed to all walks of life through structured play activities and classroom discussions, and encouraged to treat others with respect.

On the surface, it sounds like a no-brainer — the sort of thing all of our preschool teachers might support and attempt to bring into their classrooms. But teachers at the YWCA Minneapolis have a distinct advantage: They have access to an anti-bias curriculum, developed by the YWCA Minneapolis, that’s integrated into nearly every aspect of the kids’ preschool experience.

“I think early childhood is the place to make change,” said Stephanie Thomas, vice president of Early Childhood Education for the YWCA Minneapolis. “If we’re able to graduate every child with a positive self-image and a desire to learn and an openness to differences, I think that that will make a difference for everyone that they’re connect with, through their family. We’ve heard several times that it isn’t only about the child. The family does feel some of that change and learning as their child grows through the center.”

The anti-bias curriculum developed by the YWCA Minneapolis is unique among similar efforts for a couple of reasons, says Thomas. Not only is it integrated with play-based learning and healthy living components, but it’s also been around longer than most other curriculums of this nature.

“Our organization has more history in the development of anti-bias curriculum, so our connection to it is deep and it has a lot of merit to that,” Thomas said.

The YWCA Minneapolis formalized this curriculum as the state began to develop Parent Aware and other child care rating programs. Initially, staff had looked at prepackaged curriculum sets. But, ultimately, they opted to create something that truly aligned with the organization’s mission of empowering women and children and eliminating racism.

The anti-bias curriculum that came out of that effort is research-based and connected to state learning standards, Thomas explained. That’s made evident through how intentional educators are about making sure all children see elements of their identity reflected in the classroom — through teacher diversity, a diverse collection of books, different languages, religions and family structures represented on classroom decorations and more.

Empowering all students to feel that they belong in the classroom just as much as the next is a key part of the anti-bias approach, explained Thomas. And as they begin asking questions about things they don’t understand — like why someone’s hair feels different from theirs — teachers are able to help normalize diversity and model what a respectful reaction to something new or different looks like.

“A strong piece of the anti-bias is really around having children gain a strong sense of self — pride in themselves and what their abilities are and a belief in that. And then recognizing that there are differences — and that doesn’t necessarily mean that difference is a judgment, but differences are noticed by children and should be recognized and accepted,” Thomas said. “The other thing we do within anti-bias is really giving kids the tools to be able to express or change things that they don’t like, or that they see as unfair. Our hope is that is for themselves, but also in other things they see. And we do see some of that in empathy for other children in the classroom.”

While the questions that preschoolers ask are unscripted, the prompts embedded in classroom activities and materials are quite intentional. In order for the anti-bias curriculum to reach its full potential, teachers outfit their classrooms with toys, books and decor that pull in elements of diversity that go far beyond skin color to include as spectrum of different cultures, genders, abilities, religions, languages, housing situations and more.

Since the anti-bias curriculum isn’t actually contained in set of books, teachers are encouraged to be creative in how they choose to supplement various math, reading and structured play activities with anti-bias materials.

At an activity station in Kira Peters’ preschool classroom, a handful of 3- and 4-year-olds gathered around a table, where she’d scattered a mix of plastic links and laminated images of various body parts — including a close up of a forehead with cornrows, a blue eye, a smiling mouth, a hearing aid — with holes in them that she made, so the kids could add them to their chain of links.

The links are there for kids to develop their fine motor skills and practice counting, she explained. And the images of body parts are tools to help teach body awareness. They also serve, on occasion, as prompts for deeper conversations. 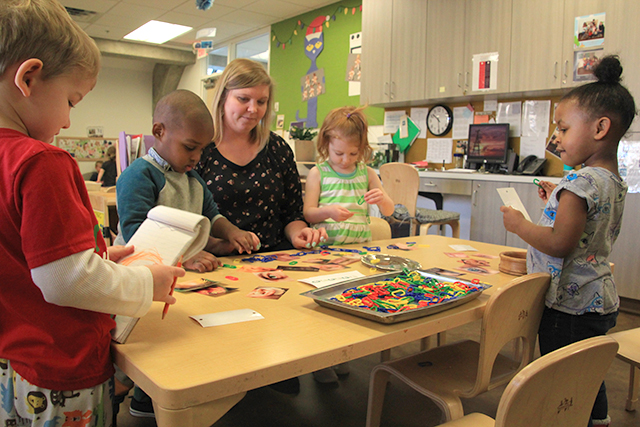 For instance, Peters says the card with a photo of a heavily pierced ear is pretty popular among the kids, who will bring it to her attention by asking about it. Instead of acting shocked or disapproving, she steers the conversation in a positive direction.

“Some people just like to have a lot of jewelry or express themselves through different art on their body,” she said, demonstrating how she’s respond.

The teacher might choose to extend that teachable moment, Thomas added, by then asking the kid if they can find an eye that looks like their eye in the mix of cards and links. Lots of kids are attracted to the image of cornrows for this very reason, Peters said. And then that opens up a new line of inquiry, to explore self-identity as well.

Nearby, a few other kids at the dramatic play station dress up in bus driver uniforms and firefighter hats and take turns driving an imaginary bus, by sitting at the front of a row of chairs. This is another way kids are encouraged to think outside stereotypical norms, by role playing with their peers in a space where anyone can be whomever or dress up in any way they want without fear of ridicule.

One little passenger on the bus — a boy wearing a necklace he’d made out of links from the other station and holding a brown baby doll and a couple of dishes — said he was on his way to a picnic. A few minutes later, he’d made his way to a picnic blanket that he and two of his classmates had set with other baby dolls and plastic food.

Some of the activities are more structured, like the question of the week — currently “What kind of hair do you have?” — that’s posted on the wall, to get them all thinking about diversity in a new way. There’s also a poster of facial expressions representing different emotions and a mobile with family photos provided by the kids’ parents on display. Both serve as reminders — that it’s OK to express different emotions, and it’s OK to come from a family that has two moms or that wears traditional clothing. 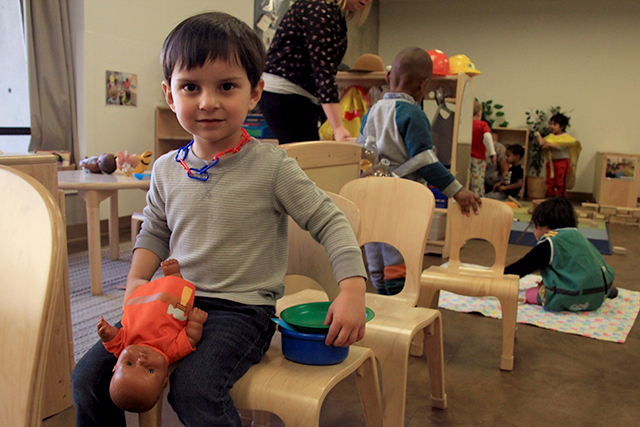 MinnPost photo by Erin Hinrichs
One little passenger on the bus said he was on his way to a picnic.

Peters also keeps a diverse collection of books on display. Asked to point out a favorite, she picked up “Lola Loves Stories,” by Anna McQuinn. She once had a little girl in her classroom who connected with this book so much that she’d carry it around for comfort.

“I think it’s because she looked like the little girl on the cover,” she said.

The anti-bias lessons look different at each age level, Thomas said. With infants, it’s really more about inviting the families in to get them engaged, putting family photos at eye-level for the little ones and using a mix of music, books and songs to expose kids to things they may not encounter at home.

All of these components carry over to the older age groups. With toddlers, teachers start leading small group discussions and exploring things like empathy and healthy self-expression. With preschoolers, there’s more opportunity to extract kids’ thoughts on differences and to encourage them to respond in a nonjudgmental way.

A lot of these things could be easy to replicate at home, so long as parents are willing to be intentional in the types of toys and books and other sensory items — or even foods — that they’re incorporating into their household.

Take, for instance, the YWCA Minneapolis’ approach to mealtime — another area that has an anti-bias underpinning. Thomas says they incorporate various ethnic cuisines into their menu. Without fail, they’ll hear from parents who’ll say they doubted their kid would eat something like a bean-based meal. But the teacher will report back that their “picky eater” actually ended up asking for seconds that day. 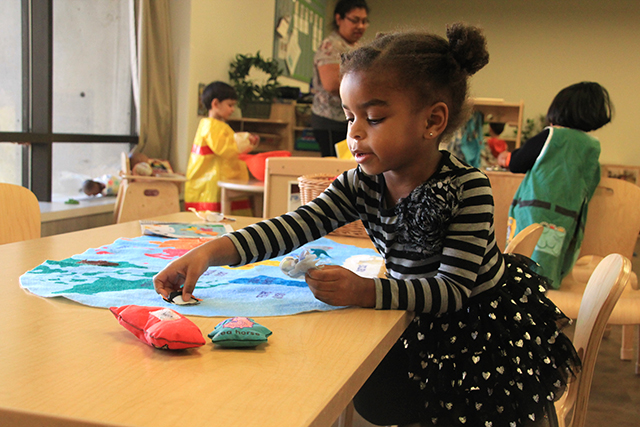 MinnPost photo by Erin Hinrichs
With preschoolers, there’s more opportunity to extract kids’ thoughts on differences and to encourage them to respond in a nonjudgmental way.

There are opportunities for families to bring cultural awareness into the classroom as well, by volunteering to participate in a heritage event or being a guest speaker. Peters says last year she had a mother bring in a bunch of saris for the children to try on one day. Another parent presented a Russian lullaby.

While there’s no exact science to measuring how the anti-bias curriculum impacts children and their families, Thomas says they’ve collected lots of parent testimonies over the years illustrating some of the ways in which children are developing a more inclusive outlook.

For more concrete evidence, she points to the centers’ academic outcomes. For instance, for the 2016-17 school year, 94 percent of children enrolled tested ready for kindergarten. Additionally, 95 percent of infants through preschoolers are on track with age-appropriate development.

These outcomes are more impressive when paired with student demographics. For the same school year, of children served — ages 6 weeks to 10 years — three-quarters were children of color and 65 percent were from low-income households, with 59 percent of families living below poverty.

“We have strong outcomes, which — along with the curriculum and openness to families feeling a part of the center — is important for families to know,” Thomas said. “Whatever walk of life you’re coming into the center with, you’ll have the same outcomes as a group, in graduating from the center.”