When Hudson Benites’ kindergarten teacher identified him as being potentially gifted, his parents had him tested. His score suggested he’d be a good fit for gifted programming offered in the Minnetonka Public Schools districts, said his mother, Ashley Benites.

So he switched schools and tested the waters as a first-grader in a program that offered supplemental instruction, outside of his regular classroom, once a week. Heading into second grade, he applied to the immersive Navigator Program, reserved for a select group of students with IQs of 140 and above. After testing and speaking with the teacher, he was offered a place in the program.

Now in the fifth grade, Hudson, 10, says he’s been happy with his experience. His teachers are supportive and he’s friends with his classmates. But the fact that he’s one of just a handful of students of color hasn’t escaped him. During a unit on stereotyping, last year, he had a bit of an epiphany.

“I sort of noticed the color of their skin more,” he said of his white classmates. “I processed that as really unfair because talent is distributed equally. It’s not like someone gives white kids more talent than kids of color.”

He says he’d like to see more kids of color in his program because having better racial representation in his class would give him a “better perspective.”

Ashley says she has conversations at home with Hudson, who’s half Peruvian, about race, representation and access.

For instance, she reminds Hudson of the conversation she had with the woman who administered his initial IQ test about the cultural bias embedded in standardized testing. There was one question that asked kids to identify a picture of a rooster. It’s the sort of question that trips up more poor, urban kids, the administrator told her, because they’d misidentify it as a chicken.

“That,” she pointed out, “was not an example of intelligence but of exposure. Yet questions like that are being used to determine if kids should be in gifted programming.”

Potential testing flaws aside, a new report published by the Thomas B. Fordham Institute, an education policy think tank headed up by Michael Petrilli, a former Bush administration aide, shows that Minnesota may not be doing enough to tap into the potential of students like Hudson. And the holdup may be something much more obvious: a lack of gifted programs.

Its researchers examined the so-called “gifted gap” and found that Minnesota schools are less likely to offer gifted programming, on the whole, than schools in other states. Here, only 51.5 percent of schools have gifted programs, compared to 68 percent nationally.

Further breakdown of these numbers shows that more affluent Minnesota schools are actually at the national average, with 64.5 percent offering gifted programming. That means the disparity between Minnesota and the national average is driven by a lack of offerings at middle- and high-poverty schools. 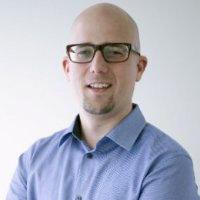 “We’re looking at elementary and middle school here,” said Adam Tyner, a co-author of the report and associate director of research at the institute. “If they don’t have access in the early grades, then that’s going to perpetuate gaps that are going to continue into later grades. If they are not getting challenging material early they get bored, they don’t accelerate the way that they could be, and at the end of the day they aren’t able to be in the [Advanced Placement] classes in high school and be able to have the same opportunities, really, to be the innovators and even inventors of the adult world.”

Tyner says his report was inspired by a recent, highly publicized study by Alex Bell, Raj Chetty and colleagues at the Equality of Opportunity Project that drew attention to the so-called “lost Einsteins” in American schools — students from disadvantaged backgrounds whose innate ability to innovate is never fully cultivated.

The report found that most patent holders have two key things in common: They were high achievers, academically, even in elementary school; and they came from an affluent background.

Using this criteria as a framework, Tyner and his colleague, Christopher Yaluma of Ohio State University, decided to look at access to and enrollment in gifted programming in high-poverty schools, in particular, in each state. In brief, they found that through gifted programming, schools are essentially reinforcing a talent pipeline that favors students from affluent backgrounds. 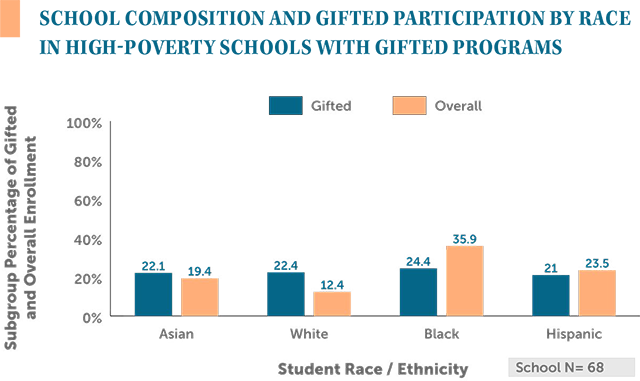 They pulled data on gifted programming from the U.S. Department of Education’s Office for Civil Rights. Beginning in 2011, schools began to self-report this enrollment data, broken down by racial and ethnic groups. It doesn’t include information on the quality of the program, or how students are admitted to them. Nor does it account for the various enrichment programs schools may offer.

Data limitations aside, Tyner and his colleague found that Minnesota falls short of many other states, when it comes to offering gifted programming. Looking at a sample of 1,148 elementary and middle schools across the state (excluding 94 very small schools with less than an average of 20 students per grade), they found that only 44.9 percent of middle-poverty schools and 58.4 percent of high-poverty schools — defined as schools with 75 percent or more of their pupils qualifying for free-or-reduced-price lunch — offer some sort of gifted programming.

When it comes to overall enrollment numbers, Minnesota fares a little better than other states. Of students in Minnesota who attend schools with gifted programs, 11.5 percent participate in those programs. Nationally, participation rates are lower, at 8.9 percent. Minnesota students at middle- and high-poverty schools also enroll at rates slightly above the national average.

Participation rates in gifted programs by race at high-poverty schools, however, show there is still room for improvement — in particular when it comes to black student enrollment.

In order to boost the participation of qualified yet underrepresented students in gifted programming in elementary and middle schools, the report includes a few blanket recommendations, including universal screening and taking actions to counter bias in how minority gifted students are identified for and served in gifted programs.

Offering a Minnesota-specific recommendation, Tyner says a good first step would be simply developing more gifted programs, particularly in high-poverty schools, where students are more likely to be overlooked.

“In low-poverty schools, and affluent schools, parents lobby for this stuff. So there are tons of enrichment programs,” he said. “Sometimes, in high-poverty schools, that isn’t happening as much. So we need to put more pressure to focus on those kids.”

While there should be a sense of urgency around not stifling students’ potential, he points out that the negative consequences of letting these kids slip through the cracks could also motivate educators and policymakers to take action.

“Kids who are high achievers, they can actually become a problem in school if they aren’t getting challenged, because it’s boring to them,” he said. “ They don’t want to sit around waiting on everybody else, so they start demonstrating their intelligence in other ways, by finding creating ways of making fun of the teachers, or stuff like that.” 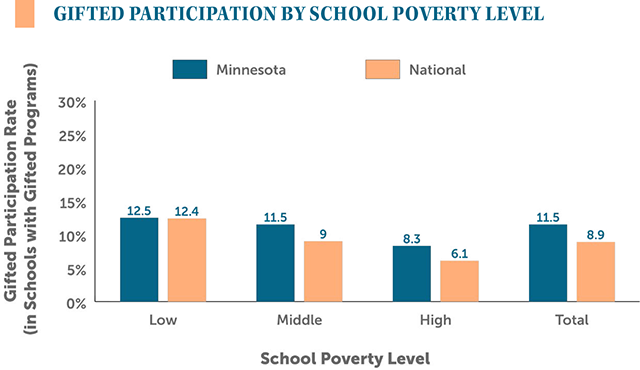 It’s the sort of thing that’s top of mind for Ali Alowonle, Hudson’s teacher. A finalist for Minnesota Teacher of the Year in 2017, she’s been a vocal advocate for getting more capable students of color into gifted programming.

“I think what it really comes to is a lot of awareness for teachers — even just having staff development for what are the signs of giftedness. Even with that, I think certain students might be overlooked because of behavior issues or because there are biases and they’re students of color,” she said.

The state Department of Education does offer professional development resources, to this effect, on its “Gifted Education” webpage. But, based on her experiences as a teacher of color who’s worked in both gifted programming and in regular classrooms, there should be a push to better educate students and their families as well.

“There are kids who mask their giftedness, and that’s a huge problem with the underrepresentation of students of color in gifted programming,” she said. “They mask it because it’s not cool, culturally, to be smart.”

Addressing enrollment disparities is only half the battle, she cautions. Teachers also need to be taking steps to ensure participating students of color don’t feel isolated — another hurdle that can inhibit their potential.

“When I do have students of color who enroll in the program, I keep in mind their cultural norms and how I can enrich their experience and make them feel good about being gifted and being in the program,” she said. “It’s hard being a minority in school, in general. Then to be in a gifted program comes with different baggage.”