On March 1, the Edina School Board approved a settlement agreement with the Edina High School Young Conservatives Club. In December, a handful of students from the group had filed a free-speech lawsuit against the district and its high school principal, alleging school officials had wrongfully terminated their club and essentially posed a double standard when it came to upholding students’ First Amendment rights.

At a school event this past fall, some students had refused to stand during a playing of “Taps.” Offended, some club members had reportedly denounced these peers on social media — a reaction that allegedly triggered hostile retaliatory comments and actions from their peers that were not mitigated by school administrators.

The district rejected these claims, asserting the district supports the freedom of expression  so long as such views “do not disrupt the educational environment, constitute threats or harassment, or target others based on protected statuses such as race, religion and sexual orientation.” The district has also fought to set the record straight on a pretty basic omission in this case: The club had not actually reapplied for sponsorship for the current school year.

Ultimately, both parties agreed to settle the lawsuit with no payments made and no admission of wrongdoing on the part of the district. The agreement did, however, include two changes to district policies: One affirms students’ free speech rights; another forbids disbanding a club “solely upon the exercise of free speech … unless that conduct interferes with the school’s basic education mission.”

But the debate over students’ free-speech rights — fanned by fears that the right to express conservative viewpoints is being stifled in liberal-leaning classrooms — has made its way to the Minnesota Legislature. On Thursday, the Senate Education Policy Committee held a hearing on an “Academic Balance” bill, authored by Sen. Carla Nelson, R-Rochester.

The bill is being backed by many of the same players behind the Edina lawsuit. In brief, it would require school boards to adopt a policy that sets stricter parameters around how and when educators elicit social or political viewpoints from students or share their own. As the various testifiers revealed, at its core this bill pits proponents of teaching through an equity lens against those who feel this approach is victimizing conservative students.

“Let me be very clear, I think the emotion and the fear and the retaliation and the anger and the hurt that we have heard, regarding what has happened in one of our schools — and perhaps many other schools — is something we, as education leaders, need to take very seriously,” Nelson said, referring to Edina high schoolers who’d testified in support of her bill. “I do not believe it’s the job of a teacher to tell a student that his or her opinion — or their parents’ opinions — are wrong. But it is their job to make sure that we have a fair and academic balance when we talk about these controversial issues.”

Nelson’s bill would require school boards to adopt an “academic balance” policy that would seek to strip political, ideological and religious bias out of all student assessments and mandate that schools provide access to a “broad range of serious opinions.”

Furthermore, it would prohibit school employees from requiring students or employees from “expressing specified viewpoints” to access things like academic credit, extracurricular activities and employment. And, in singling out teachers, the bill would prohibit them from introducing controversial matters “without a relationship to the subject taught.”

These policies would apply to students, teachers, school administrators and other school staff. In terms of accountability measures, it calls for school boards to implement a reporting procedure and disciplinary actions for policy violations.

In presenting the bill to her colleagues, Nelson called her proposal “very common sense and straightforward.” Then Katherine Kersten, a senior policy fellow at the Center of the American Experiment, kicked off public testimony. 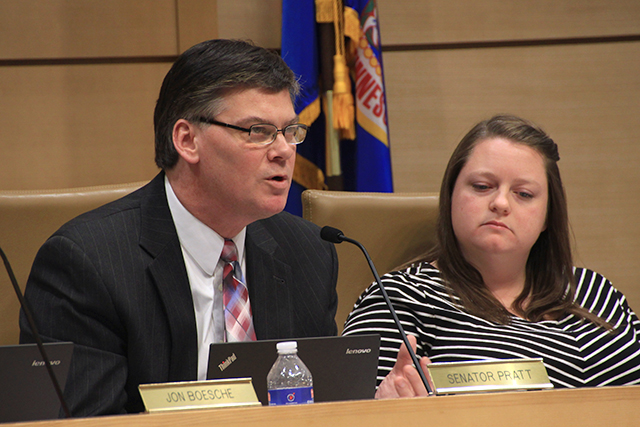 Speaking in support of the bill, Kersten criticized the Edina district’s strategic plan, which mandates that all teaching and learning experiences be filtered through the “lens of racial equity.” She claimed this framework seeks to indoctrinate students, from a young age, into believing that “white people are, by definition, oppressors” and “all others are oppressed.”

“White students are learning that they are complicit in the exploitation and oppression of minority students, simply by the virtue of the color of their skin. This engenders … shame, guilt and cynicism,” she said. “Minority students suffer even greater harm. They are being conditioned at an early age to view themselves, reflexively, as victims.”

Jazmine Edmond, an Edina student who was part of the lawsuit, said she has seen “teachers being openly aggressive to students, just because they may disagree with their views.” She also claims she and her conservative peers were bullied through social media and “shoved and yelled at in the halls,” yet nothing was done when they reported these incidents to school administrators.

While moderating the hearing, Sen. Eric Pratt, R-Prior Lake, chair of the Senate Education Policy Committee, jumped in on more than one occasion to voice support for the bill.

‘The repeal of racial equity’

Earlier in the week, prior to the introduction of Nelson’s bill, Kersten — along with Edina students and parents backing the bill — testified before the Senate committee on E-12 finance, which is led by Nelson.

Josh Crosson, senior policy director with Ed Allies, who attended that earlier meeting, called this bill an attempt by Kersten and a group of Edina parents to repeal racial equity programs across the state.

“During these hearings, I’ve heard concepts like white privilege, white supremacy … and that even discussing our country’s history of colonization and slavery [should be] deemed political and social indoctrination, which would be prohibited by this legislation,” he said. “To me, it sounded like the groups supported this legislation in order to convert our welcoming schools initiatives — and even our state standards — to serve the comforts of our most privileged.”

He underscored the fact that we cannot talk about the achievement gap without talking about race. Even low-income white students in Minnesota are outpacing their black, Latino and Native American peers, overall. And in order to address these disparities, everyone must “lean into and not away from race equity solutions,” he said.

This work must involve tackling issues like implicit and explicit bias, recognizing and addressing historical trauma and building a more inclusive curriculum that reflects the experiences of all racial and ethnic groups, he added — all measures that could be interpreted as out-of-bounds if the”‘academic balance” policy were to be enforced they way its most vocal supporters deemed appropriate.

David Aron, a staff attorney for the state teachers union Education Minnesota, called the bill “unnecessary, unworkable and very likely unconstitutional.” He also pointed out how such an attempt to “micromanage schools” runs counter to the local-control agenda largely backed by conservatives.

“I hear there are attempts to encourage students to respect one another that are misconstrued as censorship or bias against conservative students,” he said, noting teachers are doing their best to toe a fine line when it comes to addressing racially and socially charged issues at school.

Offering an example of this, Tim Klobuchar, an English teacher of 17 years in the Edina district, says that his school’s black student union had scheduled a blackout — a visual call to action for equity and tolerance for black students in which students wear all black — for the day after Election Day. When conservative students — some of whom had been wearing Trump shirts the day before — participated by wearing all black, they experienced some backlash from their peers. 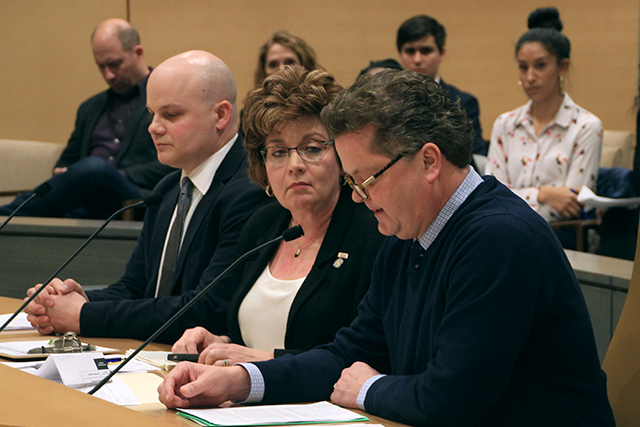 Klobuchar said he had one girl in class get so upset that she “said her piece” and walked out of class. He attempted to mediate the situation by talking with members of the Young Conservatives club who had been offended by her actions after class, he said, by asking them to see things from her point of view.

“I said some people feel Trump is supportive of racist politics and that’s why she’s upset,” he said, adding he respectfully acknowledged their beliefs as well. He said he approached the student who had walked out of class later on, asking her to put herself in her peers’ shoes. But he didn’t feel it would have been appropriate to confront her in front of the class.

Raising another concern about the bill, Dave Edwards, parent of a transgender elementary-aged daughter, asserted the bill would create an environment that is less safe for her because it would prohibit teachers from talking about “controversial matters without a relationship to the subject matter being taught.”

“My daughter is still transgender during math, at recess and in the lunchroom,” he said. “There are not two sides to treating her equitably. If teachers can’t respond with factual information about gender identity or other protected classes when questions arise, students can’t feel safe in school.”

Several Democratic lawmakers opposed the bill, raising concerns that it was unnecessary — because bullying and free-speech rights are already addressed by local policies and state statute — and perhaps even unconstitutional.

“We have political leaders who engage in racial stereotypes and that openly incite violence. It creates a climate that affects all of us and it trickles down to our kids. It’s a problem. And the fact that we’re here today is a sign of that,”said Sen. Susan Kent, DFL-Woodbury. “My primary objection to this bill — and I do find it a little ironic — is it just goes against every bit of local control that we’ve all talked about.”