Gathered in front of their school, students honored the 17 lives lost to gun violence at Marjory Stoneman Douglas High School on Valentine’s Day. Student organizers broadcast the names of each victim — along with a few of their talents, passions and finals acts of bravery — across the crowd, asking their peers to observe 17 seconds of silence between each tribute.

Then the mood shifted.

Adrian Ali-Caccamo, 16, a junior at Central, encouraged his classmates to continue to “be mobile” and to “put pressure on politicians.” He asked them to consider signing a petition he’d created just a few days ago as a way to build momentum behind a piece of gun-control legislation he and other students have been working to advance through the Minnesota Legislature.

Then he invited his childhood friend Ben Jaeger, a 16-year-old junior at Minneapolis’ Roosevelt High School who’s currently serving as his school board’s student representative, to speak about the bill he’d authored and brought to state lawmakers. In keeping with the national school walkout movement demanding stricter gun-control laws, Jaeger and his peer supporters across the state are pushing for expanded background checks.

“I’m very happy to announce that, two days ago, Sen. Matt Little introduced a bill that has everything we asked for,” Jaeger said, prompting a round of applause from the crowd. “Now Republicans control the House and Senate in Minnesota, and they’re going to take a lot of convincing if we want this to pass. That means that we need to take action and remind them who the future is. We need to call our legislators. We need to go to meetings. We need to send emails.” 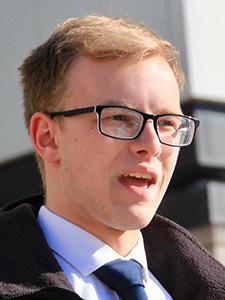 Jaeger also encouraged his peers to exercise their right to vote, noting it’s an essential part of holding elected officials accountable for creating tougher gun-control laws. To help facilitate this, student organizers announced they would be hosting a voter registration table during the lunch periods.

“Our voices — and I’m being completely real here — do not mean anything if we do not vote,” he said, before the walkout promptly came to an end at 10:17 a.m.

‘We can’t miss this opportunity’

In many ways, the local student-led movement around gun-control reforms that’s materialized in the aftermath of the Florida school shooting is difficult to define. That’s largely because the various walkouts and marches that have taken place across Minnesota may be inspired by like events taking place across the nation, but Minnesota students don’t have a template. Rather, they’re using social media to organize.

For instance, the student-led demonstration that took place outside of the state Capitol last week could be traced back to a handful of student organizers from Central High School and Cretin-Derham Hall High School. The purpose, organizers said, was to put pressure on state lawmakers to address gun safety.

Jaeger and Ali-Caccamo have committed themselves to pursuing a similar agenda through a different route. They’ve been going straight to legislators’ offices, where they’re working to gauge and build bipartisan support for Little’s student-led bill (Senate File 3279), which would mandate criminal background checks for firearm transfers. 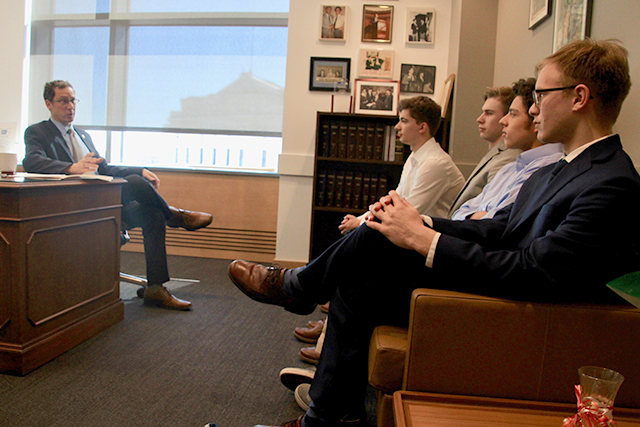 And they’re working on a tight timeline. They need to secure a legislative hearing for the bill by March 22, the committee deadline; otherwise lawmakers won’t vote on it this session.

In Florida, state lawmakers swiftly passed a number of measures, including adding a waiting period for firearms purchases and raising the minimum age requirement for buying guns to age 21.

In response, the National Rifle Association filed a lawsuit against the state of Florida seeking to overturn the new minimum age requirement, claiming it’s unconstitutional.

In Minnesota, however, even Little’s bill — which is only asking for criminal background checks — faces steep opposition. Gov. Mark Dayton listed this measure as one of many on his wish list, at a press conference where he announced his school safety plan last week. But even he won’t pose any gun-control reforms as a must-have this session, because he doesn’t see any appetite for such legislation among leadership in either the Republican-controlled House or Senate, he told reporters. And he doesn’t want anything to derail his plans to earmark $21 million for student mental health services and school building safety improvements.

“The gesture is great, but it’s not enough,” Jaeger said of Dayton’s proposal. “We need something that’s going to do more. It won’t cost money. You just have to enact some common sense legislation.” 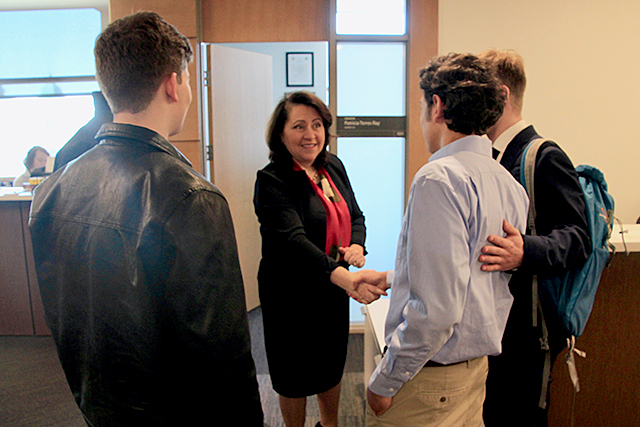 He and Ali-Caccamo have the benefit of having participated in Youth in Government, a mock legislature program run through the YMCA. As a part of that group, Jaeger had initially written a more extensive gun-control bill that ended up passing with support from students across the state and across the political spectrum, he said.

Jaeger says he first brought this bill to Rep. Jim Davnie, DFL-Minneapolis, who suggested he cut it back from four elements to just one to increase the likelihood of getting something passed. Then he brought it to Little, who agreed to author the single-item bill that would mandate criminal background checks.

Equipped with a pared-down version of that bill that they think warrants a hearing — at the very least — they are now looking to galvanize students who are impassioned by the recent shooting in Florida to demand legislative action.

“The time right now is clearly right. We can’t miss this opportunity,” Ali-Caccamo said. “We feel it’s our responsibility to not just talk about this, but to work to organize our peers to actually accomplish something.”

‘Shore these folks up’

After the walkout at Central, Ali-Caccamo went to check himself out at the school’s front office, where a pass noting his parents had already called in was waiting for him. Then he and Jaeger headed over to the state Senate building, where they were scheduled to meet with Sen. Ron Latz, DFL-St. Louis Park, at noon.

On their way, they joined forces with two of their friends from St. Louis Park High School — both constituents of Latz. 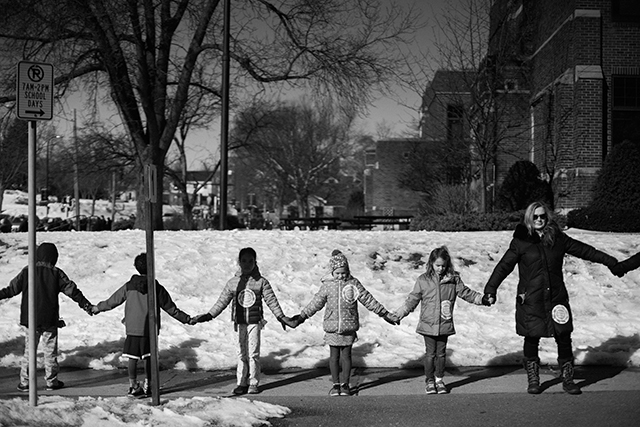 MinnPost photo by Annabelle Marcovici
Parents, students, and community members held hands to form a “human chain of love” around Hale Elementary in Minneapolis for 17 minutes.

A staunch advocate of gun violence reduction, Latz — the ranking minority member on the Senate judiciary and public safety finance and policy committee — started their meeting by asking if he could just substitute the group in front of him for the existing Senate.

The students shared their lobbying strategy: leveraging bipartisan student support by recruiting students from swing districts and from districts currently represented by more moderate Republicans to put pressure on their representatives to follow their lead.

“What you’re doing is great,” Latz told them. But he speculated that the reason the bill passed overwhelmingly in the youth-led mock legislature was because youth didn’t have to worry about the political ramifications back in their own district. They were also removed from the underlying funding allegiances.

“They hadn’t been lobbied yet by the NRA or the Gun Owners Civil Rights Alliance. Their power, as lobbyists, is that they can exact political revenge against those — like Sen. Jensen — who vote on our side of the issue,” he said, noting that just a few days after Sen. Scott Jensen, R-Chaska, had signed onto the student-backed bill a recall effort in his district materialized. 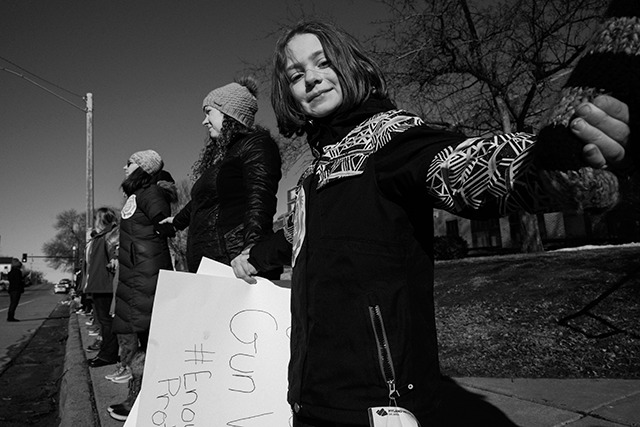 Jensen is one of two Senate Republicans the students have persuaded to sign on to the bill. Sen. Paul Anderson, R-Plymouth, also signed on. So did Sen. Susan Kent, DFL-Woodbury.

Offering some advice, Latz suggested they concentrate their lobbying efforts on suburban Senate Republican districts. And he cautioned that Democratic lawmakers are no sure win on this issue, either — especially when they’d risk being run out of office for voting in support of criminal background checks.

“Not many legislators are willing to put themselves at risk in that way,” Latz told them. “Your job is to shore these folks up.”

No amount of lobbying will pay off, however, if the students aren’t able to persuade Sen. Warren Limmer, R-Maple Grove — the chair of the Senate judiciary and public safety finance and policy committee — and Senate Majority Leader Paul Gazelka, R-Nisswa, to allow the bill to be heard on the Senate floor, Latz explained.

Gazelka has already responded to Little’s gun-control bill, saying it won’t be heard on the floor, Latz said. So he advised the four students seated in his office to start recruiting students from Gazelka’s district to speak up in support of the bill.

On their way out of Latz’ office, Jaeger and his peers scheduled a quick appointment with Sen. Patricia Torres Ray, DFL-Minneapolis. 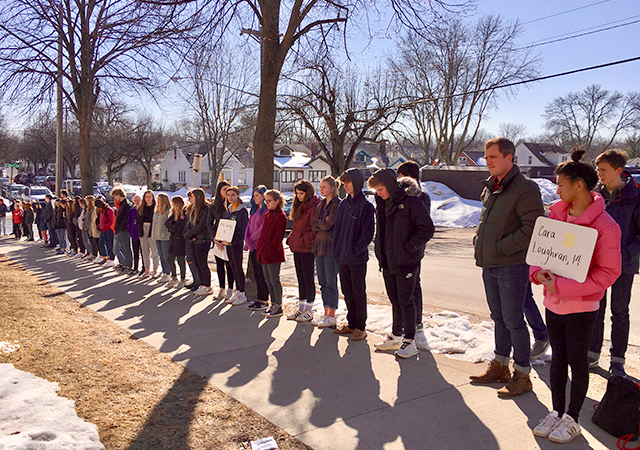 “I’m very attuned with this movement,” she told them, noting Jaeger had already talked to her about the bill.

Cutting straight to strategy, she asked if they’d had a student meet with Limmer yet. Jaeger said that one of Limmer’s student constituents has been reaching out to arrange a meeting, but hasn’t yet managed to lock in an appointment.

“We need his constituents to talk,” Torres Ray said.