Thousands of Minnesota students congregated outside of the state Capitol Wednesday afternoon to speak out about gun violence and push for gun-control reforms.

The event mirrored student-led walkouts and protests that have swept across the nation in response to the high school shooting in Parkland, Florida, that took 17 lives on Feb. 14. But student organizers say this act of solidarity didn’t come with a playbook.

Ella Doyle, a junior from Cretin-Derham Hall High School in St. Paul, says she handled some of the logistics by reaching out to local police and acquiring a permit for the march, which, for many student participants, started at St. Paul’s Central High School.

She was one of about 20 students from these two St. Paul-based schools that began coordinating the Minnesota High School Walkout just last week, she says. Once a date and time had been set, word spread via social media to their peers throughout the metro and beyond — bringing in students by foot and bus from the both private and public schools.

“As a group of students, we come here today with total diversity of opinion,” Doyle said in an interview. “As you look around, there are people here with signs with specific demands. As a group, we’re here to promote legislative action. I don’t think that high schoolers should have to write the bills for legislators. That’s why they’re in there. And that’s why we’re out here — to encourage them to write those bills.”

Not far from where students rallied, Gov. Mark Dayton had released his Safe and Secure Schools Act just a few hours earlier. His proposal includes a one-time investment of $15.9 million for school safety improvements and interventions for expelled students, along with an additional recurring amount of $5 million in mental health grant funding for schools.

In a separate — yet related — agenda, he laid out gun control reforms that he’d support. These measures include: criminal background checks, placing a 21-year-old minamum age requirement on the purchase of assault rifles, and a “red flag” law that would allow family members to ask a judge to temporarily suspend a person’s access to firearms if they can prove that person poses a serious threat to themselves or others.

He didn’t include these measures in his primary school safety plan, he said at a press conference Wednesday morning, because he didn’t want to risk stalling progress on the things that seem to have more bipartisan support.

“Senate and House leaders have both said they’re not interested in changing state laws in any of these regards,” he said, referring to his legislative proposal to help reduce gun violence. “They don’t even want to talk about it, much less act on it — which is really shameful.”

As seen elsewhere, the school shooting in Florida seems to have triggered a rash of copycat threats. At least 21 threats have been made against Minnesota schools in the last three weeks, resulting in recent lockdowns and school closures at Minneapolis’ Patrick Henry High School, schools in the Cambridge-Isanti Public Schools and Orono Public Schools districts.

While these responses have helped curb any fatalities from occurring, Minnesota schools are not immune to gun violence. In 2005, a shooting at Red Lake Senior High School claimed 10 lives. And two years before that, in Cold Spring, a Rocori High School student shot and killed two of his peers at school.

Reflecting on the recent shooting in Florida, Dayton underscored two significant details: The shooter had been expelled from school and didn’t have a family support system. In response, Dayton’s proposal seeks to add a new layer of intervention and support for students who are expelled from school. It would hold districts accountable for conducting a threat assessment prior to expulsion. Once a student is expelled, districts would be required to keep track of students’ alternative education plan and ensure that they remain eligible for school-based mental health grants until they enroll in a new district. 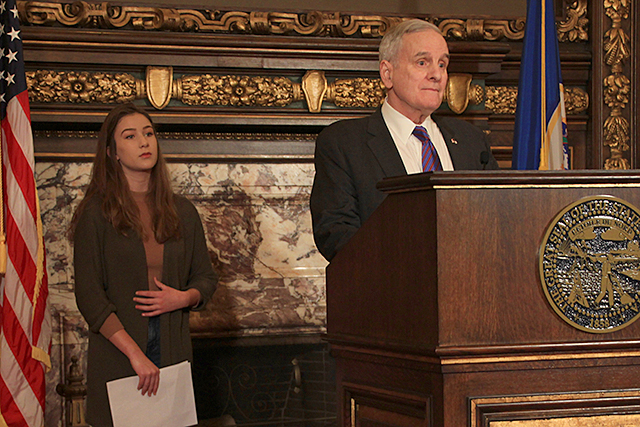 “We need to tighten up the law and responsibility of school districts and also county social service providers,” Dayton said. “When a student is expelled from school … we can’t just let them go out into the streets, or wherever they’re going, and create the climate where this terrible isolation and distress is only going to intensify and be more likely to result in some sort of terrible act.”

Additionally, Dayton’s proposal would add another $5 million in school-based mental health programs, to be allocated via grants.

In terms of funding physical security improvements to school buildings, Dayton’s proposal seeks to equip districts with new state dollars that can be invested in things like secured entrances, bulletproof glass and other features. Additionally, schools may choose to invest in related security measures like school resource officers, counselors or other student support staff.

All of these preventive measures would be funded through a one-time increase of $18 per student in state funding, totaling $15.9 million in 2019.

In the House, Rep. Jenifer Loon, R-Eden Prairie, chair of the House Education Finance Committee, has authored a bill that would free up access to an existing pot of school funding, rather than add a new dedicated set of funds to enhance school safety measures.

Under her proposal, school districts would be allowed to use long-term facilities maintenance revenue — which is currently reserved for basic facility maintenance projects like asbestos removal and window and roof repairs — to pay for new security features.

Speaking in support of Dayton’s proposal, Orono Public Schools Superintendent Karen Orcutt said it’s important that schools are given flexibility in how they invest in safety and security features because no two schools’ needs are exactly the same. But having recently endured a lockdown that lasted nearly six hours as police and the FBI investigated a “serious shooting threat” coming from inside one of the district’s buildings, she says it became clear that more needs to be done.

“All of these things we had going for us did not assure nor comfort the parents of these children, who spent the whole day under a threat and a lockdown,” she said.

While she noted she could not share any further details of the ongoing investigation, MPR reports that, according to an online fundraising effort in support of the suspect’s family, the student arrested in relation to the threat has autism and didn’t have the means or intent to carry out the threat made through a social media post.