Holding a handmade sign with “I may have dyslexia, but I’m awesome at Legos #seedyslexia” written across it, Spencer Kvikstad, 10, stood alongside more than 100 other children and parents who had come to the state Capitol last Tuesday advocating for greater dyslexia awareness and legislative action.

Asked about his experience with dyslexia, he explained, “Sometimes when I read books, the words start changing to words I don’t understand.”

That’s because his brain organizes and processes information differently — in a way that most public school systems are ill-equipped to handle, advocates say.

In kindergarten, he told his mom, “My brain is broken.” And by first grade, anxiety related to his awareness of his learning disability began to set in, his mother, Michele Kvikstad, said.

Fortunately, with her experience as an early-childhood special-education teacher, she knew how to advocate for Spencer. She paid for an outside evaluation to find that he had dyslexia — a label for which there is no checkbox on a special-education form.

So she took it upon herself to supplement his reading instruction, leaning on many of the strategies she’d come across years earlier from a professional development course on dyslexia. As a teacher, she’d sought that course out on her own, she says, because “no matter what I did there was always a handful of kids” who struggled to read.

She’s been at the Capitol before, to testify before lawmakers. And on Tuesday, at the fourth annual Dyslexia Day rally at the Capitol, she watched as a number of lawmakers stood in front of the crowd to voice their support for dyslexic learners.

Introduced as a champion of dyslexia legislation, Sen. Roger Chamberlain, R-Lino Lakes, told the group that dyslexic students are “being robbed of their value and dignity by not getting what they deserve.”

He’s authored a bill this session (SF 3572) that would require public schools to screen all students for dyslexia well before they enter third grade — a critical reading benchmark, at which point students who are still struggling with the mechanics of reading begin to fall further and further behind because they can’t access written content.

According to researchers, about 80 percent of all learning disabilities are in the area of reading. When it comes to dyslexia, researchers estimate that up to 20 percent of the population exhibit some of the key symptoms — with some people more severely impacted than others. 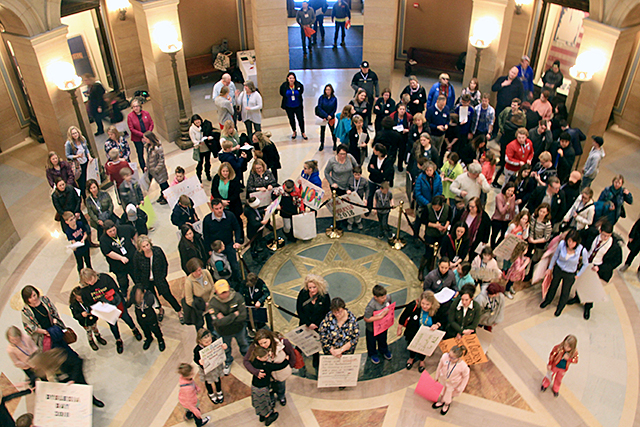 MinnPost photo by Erin Hinrichs
More than 100 children and parents came to the state Capitol on Tuesday advocating for greater dyslexia awareness and legislative action.

For Rachel Berger, the founder of Decoding Dyslexia Minnesota — the parent-led advocacy group that organized the rally — this has been a major selling point when it comes to lobbying state legislators. “There’s a lot of momentum,” Berger said in a phone interview. “There are several who are very understanding of the issue because they either have it themselves or [they have] a close family member — a child or grandchild — who struggled with it. And they get it.”

‘This isn’t my background’

Berger founded Decoding Dyslexia Minnesota five years ago, when the issue became personal for her. Growing up, she’d watched her two brothers “go from eager, hopeful learners to kids who were labeled with every other label than the label that would open doors to resources and access for them,” she said. They both ended up dropping out of school.

Years later, her father — who’d also struggled in school and dropped out in ninth grade — called her to say he’d taken her advice to get tested for a learning disability upon enrolling in a community college at age 65 and discovered he was “profoundly dyslexic.”

She was awaiting a diagnosis for her son who was a kindergartener at the time. But she knew, after that phone conversation, what his prognosis would be. She knew he’d be all right, because she had the means to advocate for him. But she felt compelled to dig in and change the trajectory for dyslexic learners who might otherwise get lost in the public school system.

“Dyslexia is looked at as a middle-class to wealthy person’s disability because we have the ability to access a diagnosis that most people don’t have [access to],” she said, noting this diagnosis comes as an out-of-pocket diagnosis, but is key to accessing appropriate resources.

That same night, she sought out advocates who had spearheaded the grassroots Decoding Dyslexia movement in New Jersey. Within a few short emails, in the span of about 24 hours, the local chapter was born.

Berger started by aiming to get Chamberlain, who had been approached by some of his constituents about the need for dyslexia legislation, on board. She says he handed her a bunch of resources, likely assuming she’d move on. But she kept coming back, eventually inviting him to sit in on a couple of special-education planning meetings. 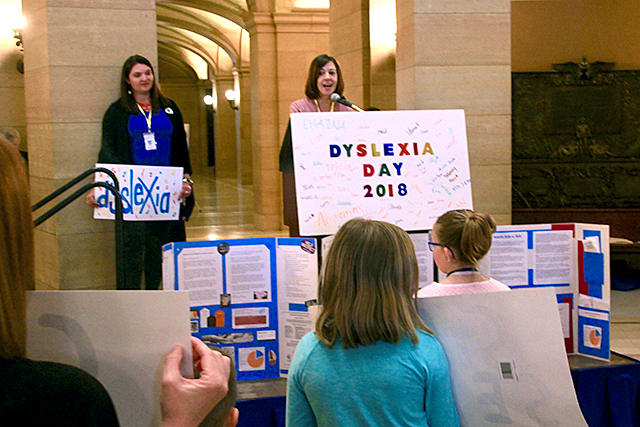 Word spread quickly, once Decoding Dyslexia Minnesota was established, Berger said. She ends up spending long days working at the Capitol during session — working remotely as an independent business consultant while still maintaining the flexibility to attend hearings and meet with legislators. It’s a world she’d never really anticipated she’d find herself in.

“This isn’t my background. I’m just doing the best I can to try and keep the issue in the forefront. I’m not a public speaker. And I’m not a politician. This really, really is grassroots for us,” she said. “But I figure if our children can be asked to go to school every single day in a setting that wasn’t designed to meet their needs, then I can certainly get up in front and lead a crowd.”

Last year they celebrated their first major victory with the passage of a bill that said the state Department of Education must employ a dyslexia specialist. And this past fall, the group secured nonprofit status and established a nine-member board. It now serves about 500 families a year — whether it be parents with dyslexic children or educators who are in search of information and resources they aren’t accessing in their teacher preparation programs or professional development courses.

Other state legislators have introduced bills this session, in both the House and Senate, that would require teacher prep programs to include instruction on dyslexia and require teacher training on dyslexia instructional strategies. These bills align with Decoding Dyslexia Minnesota’s mission, Berger said. But the only reason they’ve been introduced this session, she says, is because lawmakers actually began approaching her and her colleagues, expressing interest in getting involved.

“After five years of doing this level of work, it was great when policymakers came to us and said, ‘I want to draft this bill for you and here is what I can do.’”