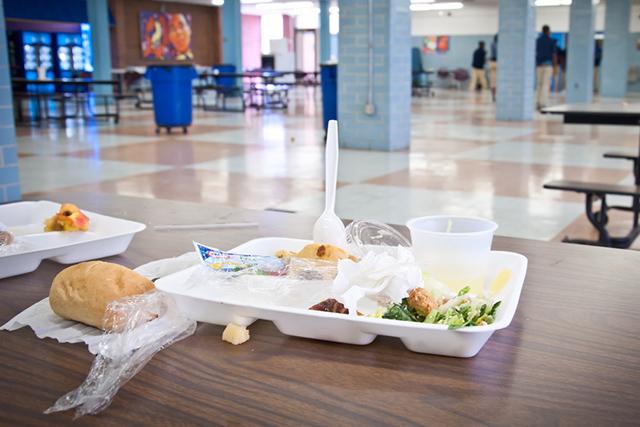 CC/Flickr/reed_sandridge
Two bills aimed at ending lunch shaming in both the House and the Senate are currently being vetted for possible inclusion in an education omnibus bill.

This past fall, Brenda Becker learned that her granddaughter had been embarrassed in front of her peers in the lunchline. An employee at the Stewartville Middle School had dumped the food from her lunch tray into the trash can before she could go sit down, after realizing that her lunch account was in the red. Then they gave her a peanut butter sandwich — as an alternative meal — and charged her a dollar for it.

“I’m really upset over the whole thing,” Becker said in a phone interview Monday. “They weren’t doing it quietly. It was so that everyone knew it was being done. If you have a child that’s already being bullied, it’s really traumatizing.”

She got the news when her daughter, who’s a single mother, called her to vent. Technically, her children qualify for free-and-reduced-price lunches. But apparently her son had used up funds in their joint account sooner than expected by purchasing some a la carte food items.

Becker says the school’s flawed lunch account system was to blame — not her grandchildren. Her granddaughter was devastated by the experience, Beckers says, adding she didn’t even want to get a meal the next day.

“My grandson is 15. He can rack up a pretty good bill in one day,” Becker explained, noting that last year his mother noticed he was adding too many extra items to his lunch tray and asked lunch staff to prevent this from happening.

Moving forward, the plan was that they should be asked to pay cash for anything extra that they wanted in the lunchroom. But the school apparently let things go unchecked in the lunchroom and then sent her an email notification instead. The warning got buried in her inbox and her daughter suffered the consequences.

The tray-dumping incident wasn’t isolated to this family. News reports broke last November that adults in Stewartville Public Schools were taking lunches from other students who had negative lunch balances and making an example of them by emptying their lunch trays into the trash as well.

In the wake of the Stewartville news reports, state lawmakers were quick to react, indicating they may even consider withholding some school funding from schools that subject students to lunch shaming. Now that the session is under way, two bills aimed at ending lunch shaming in both the House and the Senate are currently being vetted for possible inclusion in an education omnibus bill.

“What it comes down to for me is that’s between the school district or the school and the parent — not the child. I don’t want the child to be part of that collection process,” says Rep. Tony Jurgens, R-Cottage Grove, author of a bill in the House (HF 2724). “I’m hopeful that some aspect of this will pass and be signed into law.”

An old issue getting new attention

Jurgens says he first took an interest in the issue this past fall. But he quickly realized it’s “not isolated to what happened in Stewartville.” When he started looking into things, he found that lunch shaming practices had already been addressed by lawmakers in 2014, when a bill authored by Rep. Sarah Anderson, R-Plymouth, had made it illegal. He’s been consulting with her in drafting his bill, which he views as an attempt to “put some more teeth into that and to be a bit more specific, so that this practice doesn’t happen again.”

In its current form, the bill states that if a student is on free-and-reduced-price lunch, they cannot be denied that lunch for any reason. It also says that meals must be provided “in a respectful manner.”

“And — this is the big thing — once it’s served to the student, it can’t be taken back or withdrawn. That was really the reasoning behind this in the first place,” Jurgens said. “The way I look at it,  if the school serves that meal they’re not going to do anything else with it. Why would you put it in the garbage?”

Additionally, the bill asserts that all schools must post their meal policies on their website. In researching the issue, Jessica Webster, a staff attorney with Legal Services Advocacy Project, says this information currently isn’t readily available.

After submitting a public data request to all Minnesota public schools, she’s still following up with districts that are reluctant to respond. And some of the policies she’s read, thus far, indicate Rep. Anderson’s bill may not have had the impact intended.

In sharing a handful of examples in a press release, Webster highlighted a lunch policy in the Roseville Area Schools district that says “certain privileges (such as participating in extra-curricular activities, receiving a student parking pass or receiving caps and gowns for graduation) may be denied until debt is paid;” and a policy in Battle Lake Independent School District that went so far as to indicate that students who knowingly take double portions or a la carte items “will be assigned detention which may progress to in-school suspension if the behavior continues.”

In assessing the situation in Minnesota, she says a number of superintendents told her that their lunch policies appear harsher than their actual practices, noting they’d only turn a student away as an absolute last-resort measure in an attempt to collect on an unpaid lunch debt. But she challenges the notion that this strategy actually works.

“They say these practices are effective. But what it says to us — what we are hearing from the kids, families we represent, and from teachers — is that kids just don’t eat then. They withdraw. They sit back. They fear being shamed, so they don’t take a meal,” she said. “Guess what — that actually stops a debt from being accumulated. But is that what we want?”

Webster began working on the lunch shaming issue in 2011. With the passage of Anderson’s bill in 2014, Minnesota took the lead as one of the first states in the nation trying to prohibit such practices by mandating that “any reminder for payment can’t stigmatize or demean kids” she said. Since then, states like California, New Mexico and Oregon have adopted even stronger measures, she says, noting they have banned the use of alternative meals — like cheese sandwiches — for students with a negative lunch balance altogether.

When the latest wave of reports of lunch shaming in Minnesota started surfacing, she says it became clear that two loopholes needed to be addressed: There was no definition of “stigmatizing or demeaning” practices in the statute, and there were no mechanisms for enforcement.

Over the years, she says she’s noticed that the narrative coming out of districts holding on to these practices has shifted — from one of “denial and embarrassment” to one of desperation where administrators are saying, “We use it because we have to use it.”

Testifying in opposition to the bill, on the behalf of the Minnesota Association of School Business Officials at the House Education Finance Committee last Thursday, Dan Pyan requested that “the tools the districts use to collect unpaid meal accounts are not taken away.”

“These are our last-resort tools,” he said. “Trust me — they’re last resort. But after many phone calls and emails, they’re all that we have.”

In sharing the findings of a quick survey he’d initiated the day before, he says that of the 52 districts that responded — accounting for more than 190,000 student accounts — they reported unpaid lunch balances exceeded $509,000 by the end of 2017.

He said the issue is twofold. There appear to be some families who don’t qualify for free-and-reduced-price lunches; yet they still struggle to make ends meet. There are also parents who “know the system and just don’t pay,” he said.

Eventually, these lunch debts are paid for by dollars from the district’s general fund, he said. But that sort of unplanned expense “hits the classroom.”

In the South Washington County Schools district, where Pyan works as the director of finance and operations, he says they are fortunate to have an angel fund that serves as a buffer. The angel fund is made up of donations that help cover meal costs for students who dip into a negative balance. Each student gets two angel fund uses. Meanwhile, the district continues to reach out to their parents to get them to pay.