In a fairly constant stream of press conferences, bill proposals and speeches given at student-led rallies outside the state Capitol building, lawmakers have made it clear that enhancing school safety is a priority this legislative session.

Many of the gun-control proposals championed by student activists in the wake of the recent Parkland, Florida school shooting continue to face steep opposition. But proposals to increase state funding earmarked for school safety seem to have support on both sides of the aisle.

Those dollars could be used for things like adding laminated glass and emergency communication systems to school buildings, along with covering the costs of additional school counselors, social workers and other student support staff.

They could also be used to bring more police officers into schools.

Law enforcement officials who are assigned to work at schools are commonly known as school resource officers, or SROs. Given their training and uniform — often including a gun — their presence inside a school building may put the minds of some students, educators and parents at ease.

But opponents of SROs have long raised concerns that having police working inside schools criminalizes student behavior — particularly when it involves students of color — that should be handled by school administrators. Students would be better served by an investment in more school counselors and other licensed support staff, they contend.

In committee hearings, state lawmakers have touched on some of the concerns — and inconsistencies — regarding the use of SROs. For instance, in a House Education Finance Committee hearing on March 6, Rep. Jim Davnie, DFL-Minneapolis, shared an anecdote about an elementary student stealing a piece of candy out of an educator’s room and the school bringing in the SRO to “deal with this as a criminal issue.”

“What sort of training are school administrators getting to ensure they are using the officer within the scope of their professional training?” he asked Randy Johnson, director of the Minnesota School Safety Center.

The center, which is housed within the state Department of Public Safety’s division of homeland security and emergency management, is the only state agency that supports SROs. But it doesn’t regulate how SROs are used in schools, what sort of training they receive, or even who foots the bill. The department can’t even say, definitively, how many SROs are currently working at schools.

“At this point it does fall under the realm of local control,” Sen. Susan Kent, DFL-Woodbury, said in a phone interview. “But it raises other questions: If they are going to be working in our schools, should we make sure that there’s a certain level of training for these officers, who are spending their time with our kids? The Parkland issue has people looking at this in kind of  a different way, I think, and asking these questions differently.”

Decades of cops in schools

School resource officers date back to the late-’50s, with a program in Flint, Michigan aimed at smoothing relationships between students and police, according to the National Association of School Resource Officers. Over time, the practice caught on in districts across the country, with officers acting variously as counselors, coaches, helping with schoolwork and serving as mentors, according to the Atlantic.

In the 1990s, when zero-tolerance behavior policies, which prescribed strict enforcement of school rules, were in vogue, and some argue made officers’ roles more punitive. In the late- 1990s and early 2000s, the U.S. Justice Department’s COPS in Schools grants  increased the number of officers in schools.

By the 2009-10 school year, an estimated 43 percent of schools nationwide had security guards, school resource officers or sworn law enforcement officers at their schools on day a week or more, according to a National Center for Education Statistics report. A 2014 survey by the Minnesota Department of Public Safety found more than 300 full- or part-time SROs worked in Minnesota schools, accounting for at least 28 percent of public schools in the state.

Most Twin Cities metro area school districts have officers in some of their schools. But the presence, payment and duties of these cops varies widely, according to data compiled by MinnPost using information obtained from public records requests submitted to 48 Twin Cities public school districts (47 districts responded. Robbinsdale did not respond in time to be included).

‘A lot of power and authority’

Officer Crystal Jones is over halfway through her three-year assignment as a school resource officer at Roseville Area High School. Her office is located in an administrative portion of the building, near the main entrance. But she spends a lot of her time greeting students in the hallway during passing periods and during their lunch periods, which span two hours.

This face-to-face time with students is so critical to being an effective SRO, she says, that her presence in the lunchroom is actually specified in the job description written up by her employer, the Roseville Police Department. The Roseville Area Schools district contracts with the local police department, paying for a portion of her services.

Just as the use of officers varies across local school districts, so does the way the officers’ positions are funded. 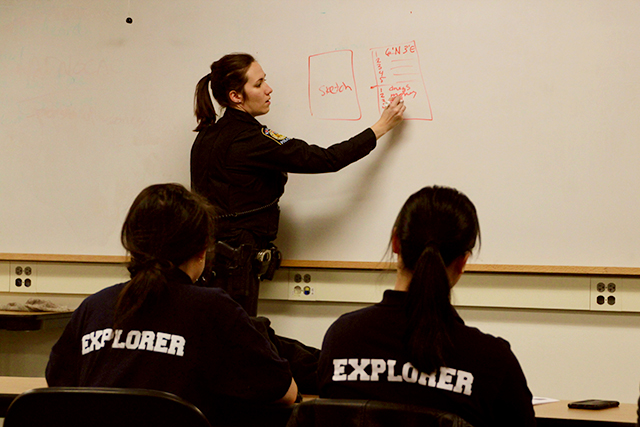 MinnPost photo by Erin Hinrichs
Looking to build even stronger relationships with students, Jones says she volunteered to lead the local Explorers group, which serves as in introduction to law enforcement for interested youth.

The National Association of School Resource Officers recommends schools and law enforcement agencies — whether at the city or county level — adopt a memorandum of understanding to spell out SRO roles and responsibilities in the schools. But even common guidelines like an SRO “shall not be used as a school disciplinarian” — as stated in the SRO contract the Shakopee Public Schools district has with the City of Shakopee — may not always be clear to teachers and other adults in the school building who go to an SRO for backup.

In the interest of avoiding this sort of confusion, Jones says her school has an important protocol in place: She doesn’t make any decisions about getting the courts involved without first consulting with a team of adults who know that student.

“We have a lot of power and authority. And we can make decisions for kids that can affect the rest of their lives. What keeps me in check is working in that team environment,” she said. “Even if it’s a criminal case, I’m still going to get advice from the kid’s counselor, social worker, psychologist, the administrator that they work with the most, the kid’s favorite teacher — because that’s going to help me figure out who this kid is.”

While some districts seem to use SROs in more of a disciplinary capacity, Ward says Mounds View uses its police in schools proactively, to get to know kids. They do not determine consequences for students who break school rules, but they can get involved if a student is determined to be a threat or if a crime is committed. For example, if two students are involved in a fight and one injures another, administrators would handle school consequences, but may let parents know they can report it to police through the SRO. If there’s concern over a student’s wellbeing, the SRO may be called on to do a welfare check.

Ward said said there was some skepticism when the district put its first officer at Mounds View High School, but since, complaints are rare.

“What we’ve found is as they get to know kids, kids will tell them things,” Ward said. “That helps us keep orderly buildings. It’s really a presence.”

Jones’ role at the school extends beyond law enforcer, she says, to two other expectations that she’s had to adapt to on the go. She spends time as an educator — talking about things like drinking, drugs and the consequences of sharing sexual photos online —  and as an informal counselor, serving as a sounding board for students who don’t necessarily have a strong connection with a teacher or another adult in the building.

Looking to build even stronger relationships with students, Jones says she volunteered to lead the local Explorers group, which serves as in introduction to law enforcement for interested youth. She also completed a multi-day SRO training offered through the National Association for School Resource Officers that covered things like student trauma, crisis interventions and youth mental health. Her boss required her to attend that training. But she has since sought out additional trainings that are designed specifically to help police officers make the street-to-school transition, including one hosted by the Minnesota School Safety Center.

Johnson says his center offers two levels of SRO training — a basic course, and a more extended course that delves into more contemporary issues. These classes focus on everything from cyber bullying and juvenile law to adolescent brain development, working with special-education students and restorative practices.

“We generally run maybe 70 or 80 SROs [through] per year,” he said of the SRO trainings his center hosts.

But, again, these sorts of orientation trainings are not mandated by the state. They are a discretionary measure that — as Jones can affirm, after having served as a patrol officer for nearly three years prior — can make a significant difference in how an SRO approaches the role.

“It’s a huge change. And that’s one of the reasons the first year was really challenging for me, because I had to get into a different mindset of education rather than discipline,” she said, adding that once she set her law enforcement impulses aside, she developed a preference for assigning students to community service and other alternative disciplinary measures over sending them to court. “But it takes time for an SRO to get there.”