On Thursday, the state Department of Human Rights provided its first official update on the investigation it launched into exclusionary discipline practices — suspensions and expulsions — that disproportionately impact students of color and those with disabilities.

This past fall, the department presented a total of 43 school districts and charter schools with a choice: enter into an agreement with the department to come up with a plan to address these disparities, or face litigation. Specifically, they’re focusing on reducing disparities in discipline for non-violent offenses — a category that includes things like swearing, eye rolling and other actions that could be deemed insubordinate or disruptive.

“These leaders are not alone with dealing with these disparities — but they are the first to stand up, lean in and drive toward solutions,” MDHR Commissioner Kevin Lindsey said in the press release. “Kids simply can’t learn if they are not in school. These agreements are a crucial step in ensuring we are doing all we can to help Minnesota students develop their interpersonal and learning skills so they can thrive.”

So far, the Department has filed charges against two districts: the St. Louis Park Public Schools district and the Walker-Hackensack-Akeley School District.

When reached for comment Thursday afternoon, Sara Thompson, a spokesperson for the St. Louis Park district said the district is, in fact, “seeking to enter into an agreement” with the Department.

In a follow up interview, Lindsey said that in light of this information, he’s “hopeful we can, in a short period of time, reach an agreement with them,” adding that even after charges are filed, his department “never closes the opportunity to reach some type of agreement, short of completing its investigation.”

As of late Thursday afternoon, a spokesperson for the Walker-Hackensack-Akeley School District could not be reached for comment.

The Department is continuing negotiations with the remaining school districts and charter schools, and “anticipates announcing another round of agreements in the coming week,” according to the press release the Department sent out this afternoon.

In an interview, Lindsey added that he and his staff have been in ongoing conversations with several other school leaders that he expects will soon materialize into agreements once they’ve had an opportunity to get approval from their respective school boards.

Board approvals pending, he says, “for all intents and purposes, the districts and the Department have an agreement” at this point.

For districts and charters that have chosen to enter into a collaborative agreement with the Department, all have submitted three-year plans (available here) that outline the specific strategies they’ll be implementing. These strategies include a broad range of things like professional development trainings to help educators address the “implicit bias that influences perceptions of student behavior” and ways to increase student and community engagement. 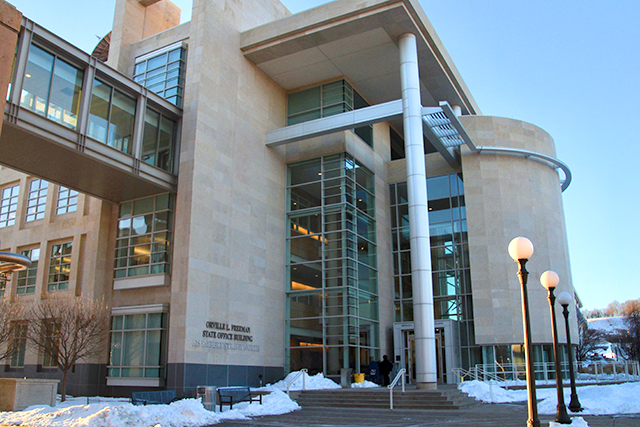 MinnPost photo by Erin Hinrichs
According to the state Department of Human Rights, five school districts have chosen to enter into an agreement.

For instance, according to the agreement submitted by the North St. Paul-Maplewood-Oakdale School District, the district will be providing professional development with a focus on things like culturally responsive teaching practices and trauma-informed care, and reforming behavior response protocol to include things like restorative circles at every school site. It’ll also be monitoring its progress in reducing discipline disparities by reviewing  suspension data broken down by race and special education status each month with school leaders and each year with the school board. Lastly, the district will look to enhance hiring practices aimed at recruiting and retaining more teachers of color.

“As we work to eliminate disparate outcomes for students, we are pleased to collaborate with the MDHR and area districts to share best practices and elevate student voice,” said Christine Osorio, the district’s superintendent.

Disciplinary incidents that involve a safety concern, as well as those that involve the possession of a weapon or illegal drugs, are not subject to the agreements. Rather, the Department directed school districts and charters to focus on “finding alternatives to suspensions for challenges such as disorderly and disruptive behavior, verbal abuse and other non-violent offenses” — the categories that more than a third of all suspensions and expulsions fall under every year.

In addition to submitting an action plan, those who enter into an agreement with the Department that’ll be in effect through 2021 are bound to a number of other accountability measures. These include participation in a Diversion Committee created as a support hub where districts and charters can share best practices and an expectation that districts and charters will seek community feedback on this work.