When horticultural and wine scientists at the University of Minnesota apply for funding to research growing grapes in a climate better known for producing soybeans than wine, they often have to answer a common question: Why bother?

“We get that pushback when we submit grants all the time,” said Matt Clark, who leads the University’s grape breeding project.

The simple answer – why not? – smacks of the same spirit many Minnesotans adopt to handle long, cold winters. Yes, the climate presents challenges, but farmers and ag researchers also see opportunities: Breeding cold-hardy fruit varieties has made the university a lot of money over the years, after all. “We don’t have to fit inside these boxes of what pinot noir tastes like from Washington,” Clark said. “Just logically, people want to grow fruit where they live.”

The frost-free growing season runs from about mid-May through the end of September in Minnesota – less than half the year — and it shortens as you move north. So farmers like Becca Carlson of Seeds Farm in Northfield negotiate the climate by introducing techniques that prolong the season — often using tunnels, hoop houses, and greenhouses — and using cold-hardy varieties that thrive where there are fewer hot, sunny days.

“I’m growing ginger,” said Carlson. She planted the seeds, from Hawaii, in a hoop house. “It’s a trial this year for personal use. If it goes well, maybe sell it to a few restaurants. Local ginger! How cool is that?”

But the University of Minnesota is trying to push things even further, with funding for research and experiments on everything from breeding new cold-hardy varieties to testing new methods. Right now, fruit breeders at the Horticultural Research Center are using a U.S. Department of Agriculture grant for nearly $92,000 to improve cold-hardy kiwi.

Bob Guthrie started volunteering with the Horticultural Research Center in the early 1990s after he became enamored with the kiwifruit vines he planted in his yard in Roseville. He travels overseas and around the U.S., helping amass a broad collection of cold-hardy plant material for university researchers. “The kiwifruit’s just kind of fun,” he said. “You think of apples – there’s all kinds of different colors, flavors. Kiwifruit is even more so. The flavor combinations are just incredible.”

He said kiwifruit has enough interest in the state among hobbyists and backyard growers to attract more research. It could have commercial appeal, even if the niche market is small. “We’re not a huge fruit-producing state, but we have really an outstanding program,” Guthrie said. “They’ve always kind of prided themselves in turning out good and interesting things.”

Andy Petran, a postdoctoral associate at the university researching how to extend the growing season for various crops, said it’s the university’s job to help build a more diverse landscape. “We really are trying to take these crops that are associated with more tropical or southern climates and make it work here,” Petran said. “It’s a very alluring opportunity for any crop you ever dreamed of.” 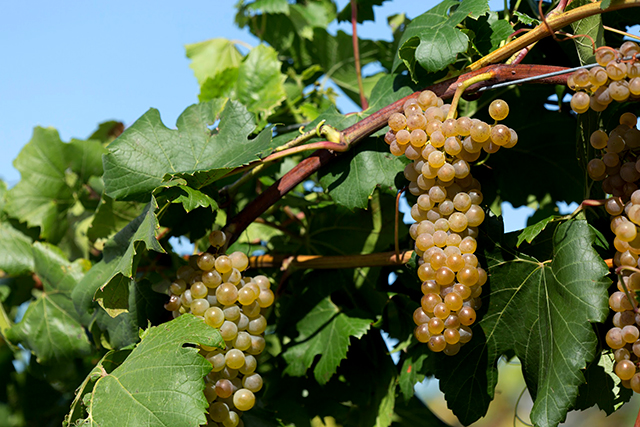 Take strawberries: The most popular type in Minnesota – called june-bearing – can withstand winter here, but it prefers shorter days for developing flower buds that produce fruit. By the time dormant plants wake up in spring, the days are too long for them to develop any new buds. Instead, during a harvest that lasts four to six weeks, june-bearing varieties produce fruit from buds developed at the end of the last season.

Farmers can’t earn a living off such a short harvest. So those who grow strawberries also grow other crops. When the short strawberry season is over, they move on.

Petran wanted to know if another a strawberry type – called day-neutrals and common in California and Mexico – could thrive here. It hasn’t before because the winter is too extreme.

Using a “radically different” approach, Petran grew day-neutral strawberries that produce fruit all summer and into fall, with estimated yields of 8,500 pounds per acre – enough to keep a farm very busy.

Petran said it hasn’t caught on as much as he’d like, likely because the approach intimidates the growers he’s talked to.

It requires more time and money in a few areas: For one, he recommends planting new strawberries each year, tearing out the plants at the end of the season instead of keeping them over winter. Many berry growers invite customers to pick their own fruit, which amounts to free labor. Petran’s system, with tunnels and plastic mulch (to suppress weeds), is more fragile and could be quickly ruined by unskilled hands.

“You would need to be picking multiple times a week, every week, all summer,” he said. “It alters everything else you’re doing on your farm, too.”

But he convinced himself. He’s leaving full-time scholarship to start Twin Cities Berry Co., where he’ll grow strawberries on a few acres leased in Northfield and sell to co-ops in the Twin Cities.

“More local fruit for Minnesota is always a good thing,” he said. “There’s this nationwide increase in demand for local food. I was hoping my research would help supply that for the Upper Midwest.”