In June, the Minneapolis Public Schools board unanimously finalized a financial ask that has the potential to help the state’s third-largest district regain some long-needed financial stability: a two-question, $30 million referendum on the November ballot.

The first question will ask Minneapolis voters to consider an $18 million increase to the existing operating levy ($1,604 per pupil), which is used to pay for everything from staff salaries and benefits to classroom supplies and special student support services. This increase would bring the district’s operating levy to to the state-allowed maximum.

The second question will ask voters to consider establishing a new pocket of revenue for the district via a capital projects/technology levy. This ask — $12 million — would be used for technology upgrades and maintenance expenses that the district currently covers with dollars from its general fund.

If approved, the district officials say they’re not looking to invest in any new technology-based initiatives. It would simply free up the $12 million currently earmarked for tech support to be used to fill other funding gaps. It’s a funding mechanism that more than 20 other metro area districts currently take advantage of, says Josh Downham, director of government relations for the district.

Speaking at a public affairs forum hosted by the Minneapolis Regional Chamber last Friday morning, Superintendent Ed Graff said the two-part referendum is something that was given “a lot of thought and consideration.”

Shortly after he joined the district as superintendent in 2016, voters overwhelmingly approved a renewal of the expiring referendum, with 83 percent of nearly 198,860 voters supporting it. From there, Graff recapped for the audience, district leadership and staff took a multipronged approach to correcting the district’s chronic budgetary deficit before going back to voters with a final plea to help bridge the gap.

This year — for the first time in five or six years, Graff estimates — he and his staff presented the board with a budget “with an equity focus,” he said, that did not tap into the district’s fund balance. This required the district to make cuts to staff and programming.

District officials have also continued to lobby for more state funding. For instance, Graff said, if the state were to fully fund two things, as promised — mandated special education services and inflation costs tied to things like utility fees — the district would have an additional $44 million at its disposal.

In looking forward, Graff says the district has been working with a consultant on a comprehensive design project, looking at everything from busing and enrollment trends to programming, to ensure greater alignment of resources and sustainability of offerings in the district.

“My goal is for us to work over the next several months to flesh out that design and have it approved by the end of the calendar year,” he said. 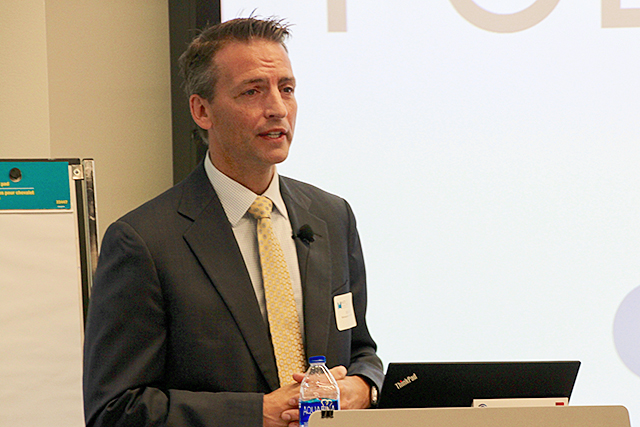 MinnPost photo by Erin Hinrichs
Superintendent Ed Graff said, if the state were to fully fund two things, as promised — mandated special education services and inflation costs tied to things like utility fees — the district would have an additional $44 million at its disposal.

Legally, Graff and his staff are only allowed to provide information about the upcoming referendum. To assist voters in calculating the financial impact of a successful referendum on their own property taxes, the district has created an online resource, here. For instance, if both questions pass, the owner of a residential homestead valued at $250,000 would pay an additional $137 per year, or about $11 a month.

A group of volunteers has stepped up to run the public campaign side, dubbed: “Yes for Mpls Kids.” The campaign committee has three co-chairs — Heather Rein, Stephanie Gasca and Tom Hoch — and a handful of honorary co-chairs, including Minneapolis Mayor Jacob Frey.

Focus of campaign will be after the primary

While the campaign’s website is up and running, things have been fairly quiet so far, says Downham. But the public campaign effort will begin to pick up in the coming weeks.

“We were very deliberate about ensuring that we don’t get out in front of the primary election, because we’re not on the primary ballot,” he said. “As soon as the primary is over, you’ll start seeing signs, mailings.”

Voters can also expect to receive face-to-face pitches to support the referendum — a message that’ll be carried by both the Minneapolis DFL and the Minneapolis Federation of Teachers campaigns, which have signed on as endorsees.