News
Effective Democracy
This coverage is made possible by a grant from The Joyce Foundation.
July 23, 2013

At the start of the 2013 legislative session, members of the board responsible for administering Minnesota’s campaign and ethics laws thought they had a chance to strengthen these notoriously weak statutes. After all, reform-minded DFLers had recaptured control of both houses.

The state Campaign Finance and Public Disclosure Board offered two bills to improve Minnesota’s campaign and ethics laws, which in 2011 received a D+ rating from the national Center for Public Integrity. One bill was substantially weakened while the other never received a hearing in either house.

Instead, the Legislature’s new DFL majority went in the opposite direction. It approved an amendment relaxing Minnesota’s 20-year-old ban on gifts to public officials – the so-called Marty law, named after its author, Sen. John Marty, DFL-Roseville. The amendment will once again permit lavish legislative parties and receptions paid for by special-interest groups.

David Schultz, a Hamline University professor and an expert on ethics and disclosure laws, says most people probably don’t realize how far Minnesota has slipped in comparison to other states.

“When we start falling behind states like Alabama, it’s pretty embarrassing,” he says. “This [change in the Marty gift ban] just takes us backwards.”

Many legislators and other officials have long resented the Marty law, which prohibits them from accepting gifts of any value – including food and drink – from lobbyists or interest groups. It exempted only mementoes and trinkets costing less than $5, and food and drink from an organization when the recipient appears before it to speak or participate in a panel discussion.

Sen. Dave Senjem, R-Rochester, offered an amendment on the Senate floor to change the law, citing the frequent legislative complaint that it has prevented lawmakers from socializing and getting to know each other at lobbyist-funded receptions that once were nearly as frequent as floor sessions.

“From the day I got [to the Legislature], everybody complained about the Marty law from the standpoint of just this place has changed, we’re contentious, we don’t get along together, we’re not friends, we don’t know each other,” Senjem told the Rochester Post-Bulletin. (Senjem did not respond to a MinnPost request for comment.)

However, the Marty law ended some serious political misbehavior. Before its passage, some lobbyists picked up the dinner tab so frequently for the same legislators that they could have claimed these legislators as dependents. Many years ago, one legislator even was caught sleeping regularly in the hospitality suite maintained by a certain lobbyist.

Apparently most lawmakers believe they can’t socialize with one another unless someone else pays for it. This is true even though they draw generous per-diem expense payments – $86 a day for senators and $66 for House members – when the Legislature is in session.

Senjem’s amendment will allow lobbyists and interest groups to host lavish legislative receptions as long as they hold them away from the Capitol and they extend invitations to all legislators at least five days before the event. It places no limit on the amount groups can spend to entertain officials.

His little-noticed amendment was approved by the Senate on a 34-28 vote, with Senate Majority Leader Tom Bakk of Cook and other leading DFLers supporting it.

The amendment was opposed by Marty, who says, “It’s not the end of the world, but it’s a step backwards.”

“The better, well-funded organizations are going to be empowered by this law,” says Schultz. “It just enhances the power that the larger organizations already have.”

The bill, which was approved by both houses and signed into law by DFL Gov. Mark Dayton, also included a provision that increases from $100 to $200 the maximum contribution that can be accepted by political committees without disclosing the source.

This change was advocated by the Campaign Finance and Public Disclosure Board as a way of reducing the voluminous contribution disclosure reports that campaigns must file. But Schultz says it will enable lobbyists and interest groups to secretly funnel substantial amounts of money into the political war chests of legislators, legislative caucuses and the political parties. 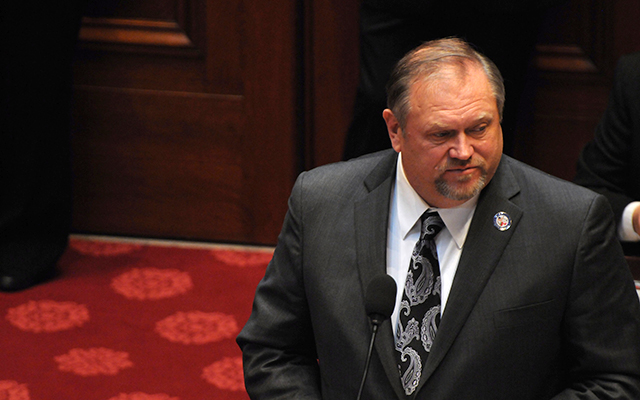 MinnPost photo by James NordSen. Tom Bakk was criticized for proposing and voting on salary increases for Senate staff that included his wife, Laura, whose pay was boosted to $68,561 a year.

Gary Goldsmith, executive director of the bipartisan state campaign finance board, acknowledges that Minnesota’s ethics laws “are very weak. And that’s a statement I think our board agrees with.”

One of the bills the board offered for discussion during the 2013 session would have significantly strengthened these laws. The bill would:

Sen. Bakk was criticized for proposing and voting on salary increases for Senate staff that included his wife, Laura, whose pay was boosted to $68,561 a year. And Hennepin County Commissioner Peter McLaughlin was questioned for repeatedly voting on multi-million-dollar trash disposal contracts with a corporation employing a law firm where his wife works.

Several legislators also have been questioned about potential conflicts concerning their work as independent insurance agents and their involvement in health insurance issues.

Marty believes that the failure of current law to cover the financial interests of independent contractors is “a huge loophole. I’ve had bills on it for 12, 14, 16 years or more, but I’ve never gotten anywhere.”

Goldsmith calls the board’s ethics and disclosure bill “very strong” and says it generated “a lot of interest” last session, even though it didn’t receive a hearing. He hopes it will be starting point for legislation in 2014.