News
Effective Democracy
This coverage is made possible by a grant from The Joyce Foundation.
July 18, 2013 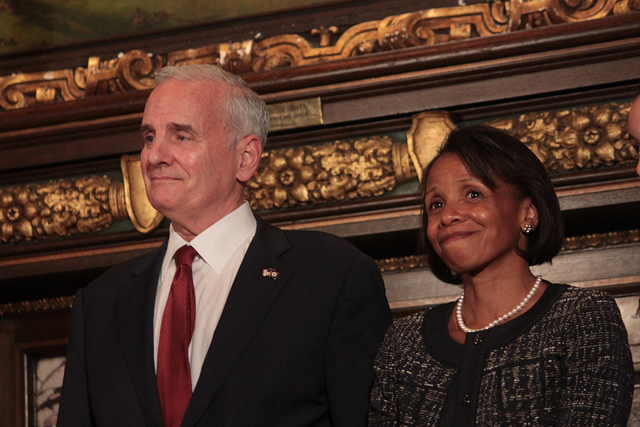 Courtesy of the Governor's Office
Gov. Mark Dayton appointed Justice Wilhelmina Wright to the Minnesota Supreme Court in August of 2012.

Minnesota’s judicial system — and the way judges are selected for office — is highly regarded nationwide, but experts and observers say serious damage to the entire process may be inevitable if recent legal and ideological shifts aren’t addressed.

While Minnesota so far has avoided the expensive, highly politicized judicial elections that have plagued states from West Virginia to neighboring Wisconsin, we may not stay so lucky for long.

A 2005 court decision opened up the “Pandora’s box” of special-interest attention to judicial elections, according to judicial observers.

Now, some of those elections have begun to resemble expensive legislative and gubernatorial races in other states, with outside groups pouring money into the campaigns and political parties endorsing judicial candidates.

That’s a far cry from the air of impartiality that judges have attempted to maintain historically in the typically uncontested, nonpartisan races.

But an unlikely — and broad-based — coalition of groups, ranging from the Minnesota Chamber of Commerce to the AFL-CIO, is working to ensure Minnesota’s judicial system remains worthy of the public trust.

They want to add to Minnesota’s current protections to maintain a well-functioning, highly regarded judiciary. Advocates say that if reforms aren’t put into action soon, the landscape of Minnesota’s judicial system will be irreparably harmed.

“It hasn’t happened … but it’s a loaded gun,” University of Minnesota political science professor Larry Jacobs said, echoing a handful of other experts.

“There’s no reason why this won’t happen in Minnesota,” he said, “and my hunch is it’s going to happen sooner than people think.”

Experts point to Minnesota’s judicial selection process as a key reason for the state’s strong judicial system with highly qualified judges and public faith that justice will be served.

Minnesota’s current judicial selection process shields the state from the big-money, special-interest-heavy elections that have started sweeping through other states.

Although judicial elections occur frequently in Minnesota, more than 90 percent of judges reach the bench as gubernatorial appointees after undergoing a rigorous outside application and review process known as “merit selection.”

“That probably has protected us also from some of the abuses of other states,” said Sherri Knuth, public policy manager at the League of Women Voters of Minnesota.

The vast majority of judges exit the bench partway through their terms, leaving their replacements up to the governor. A mandatory 70-year-old retirement age for judges also makes turnover more frequent.

Judges in Minnesota — from the district court up to the state Supreme Court — serve six-year terms before they must stand for re-election. There are special circumstances for judges that are appointed to fill in during a different judge’s term. Almost every election is uncontested, and challengers nearly always lose against incumbent judges.

So, once a governor appoints a judge, their incumbency almost ensures repeat terms.

While some argue that the current system doesn’t allow new blood into Minnesota’s judiciary and robs voters of a chance to select the right candidate, many experts say that the changing electoral landscape could invite corruption in the state’s judicial elections.

For the past 20 years, the Minnesota Commission on Judicial Selection has vetted district court applicants and forwarded the most qualified candidates for gubernatorial selection. By all accounts, the 49-member board has selected applicants that have made Minnesota’s judiciary the envy of the nation.

Most governors, including DFLer Mark Dayton, choose to follow the commission’s recommendations, said current chairman Lee Sheehy, who works for the McKnight Foundation. The group’s advice isn’t binding, which advocates would like to change.

Dayton also follows the commission’s guidance on appellate court appointments, which is technically not part of its official purview.

Eric Magnuson, a former chief justice of the Minnesota Supreme Court and chairman of the commission under Republican Gov. Tim Pawlenty, said the state is widely recognized for the quality of candidates that have come from the advisory group. 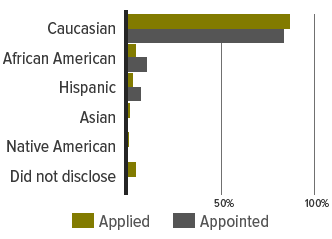 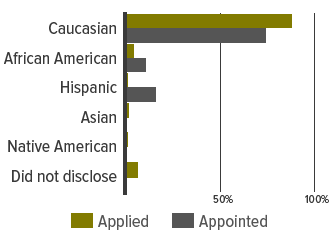 “It has traditionally been a very diverse and qualified group that has made the recommendation,” he said, noting that the commission’s goal is to give the sitting governor such good choices that he can’t make a mistake.

“I think we’ve fared very well,” added Sheehy. “We have not seen, I think, serious erosion by big money.”

In 2012, Dayton made 29 judicial appointments, according to the commission. Fifty-five percent of the appointments were women and 17 percent were people of color.

“I think that minority candidates fare far better in this kind of selection process than they would in open elections,” Magnuson said.

Advocates hope an overhaul to Minnesota’s judicial election and selection process could come as soon as 2014.

A band of more than 30 organizations, ranging from labor unions to business groups, has been working as the Coalition for Impartial Justice to enact significant changes to how judges are chosen in Minnesota, campaign director Ryan Kelly said.

Like other experts and advocates, Kelly said the coalition wants to enact policies to block big-money judicial elections before they take root in Minnesota.

“I don’t think we have to sit around and wait for the 35W Bridge to collapse,” Kelly said of a potential crisis. “Once it happens, there’s no going back.”

The coalition’s main goals involve a pretty huge overhaul of the current process. They’re based on recommendations from a commission that former Gov. Al Quie headed in 2007.

Under the new system, open elections for judicial candidates would be a thing of the past in Minnesota. All new judges would face the merit selection process, Kelly said, in order to ensure that the best applicants are considered for a post at the district, administrative or appellate levels.

If the Impartial Justice Act becomes law, the commission’s recommendations would become mandatory for a governor to follow. Right now, the advisory group’s endorsements aren’t binding and only pertain to district court and certain administrative judges.

After a judge is chosen, they would face performance reviews during their term. The review, which would rank a judge as “well-qualified” “qualified,” or “unqualified,” would be made public before a “retention” election.

In retention elections, voters would decide whether judges had adequately performed their duties. If judges received majority approval, they would stay in office. If voters decided to oust a candidate, the governor would choose a new judge, using the mandatory merit-selection process.

At least 20 states use retention elections for some judges, according to the Coalition for Impartial Justice. Two-thirds of the states choose some of their judges using the merit selection process.

Kelly acknowledges that selling the change has been tough work. Not only is the proposal a major overhaul to an entire branch of government, but it would also take a constitutional amendment to implement.

The coalition hopes to prevail this session in order to place the issue before voters during the 2014 elections.

“We’re going to be really trying to elevate this conversation and help educate the citizens of Minnesota so it’s something that’s more in their realm of thought … on a day-to-day basis,” Kelly said.

The unusual mishmash of groups has its work cut out for it. For instance, Rep. Deb Hilstrom, chairwoman of the House Judiciary Committee, said she supports judicial elections.

Any sort of overhaul will require her sign-off.

“I am not a fan of retention elections in its current form,” she said. “I think that there are things we can do in our state to make certain that we don’t have big money influencing our judicial system.”

Hilstrom also said she has concerns about making the merit selection system mandatory for the governor to follow. “Then it becomes about the committee and who is on it,” she said.

Larry Jacobs, the University of Minnesota expert, said he’s concerned that the campaign hasn’t managed to make much impact after working on the issue for years. Last session, the measure only moved through one committee in the House and another in the Senate.

“They’re keeping at it, but they’ve been at it for a while now,” he said. “I’m getting more skeptical about its chances because it’s running into some significant opposition.”

Opponents like Greg Wersal, a former state Supreme Court candidate and longtime activist, argue that merit selection and retention elections rob voters of the opportunity to adequately choose who represents them in court.

Wersal, who didn’t return multiple requests for comment, argues on his website that retention elections would make Minnesota’s judiciary unaccountable to the voters. He also criticizes the proposed changes as giving too much power to the governor to select judicial candidates.

Wersal was one of the main forces behind the court case that opened up Minnesota’s judicial elections to the “big money” interests that many activists and advocates have criticized.

He argued that the decision has affirmed judges’ rights to free speech and praised it for bringing more competition and sunshine into judicial races both in Minnesota and nationwide.

Observers from across the ideological divide, in contrast to Wersal, are pushing for the changes before it’s too late.

“No system is perfect. You’re going to have issues with some judges no matter how you pick them, but we have really, really high-quality judges in Minnesota and we should guard that,” Magnuson said.

“It’s like anything else. If you don’t take care of it, you’ll lose it.”