News
Effective Democracy
This coverage is made possible by a grant from The Joyce Foundation.
Oct. 24, 2013

Electronic pollbooks will significantly improve many aspects of voting in Minnesota, but questions remain about the effectiveness and costs of a fledgling technology that many consider the future of elections nationwide.

That’s the prevailing view of state and local officials and national experts about the evolving technology, which eventually could replace paper versions of voter data, such as verification and identification information and precinct assignments.

The systems consist of laptops or tablets loaded with voting administration software that are meant to improve election speed, accuracy and reduce some costs over the current paper pollbooks, according to advocates.

A state task force is investigating potential legislation on electronic pollbooks, and a separate pilot project will use the digital tools in select polling places for next month’s elections.

Many officials have said it’s too early to judge the technology because there haven’t been many usable tests so far. They agree, however, that the basic premise is an improvement over current practice.

“I’m absolutely confident that they’ll prove to be better,” GOP Sen. Mary Kiffmeyer, a former Minnesota secretary of state, said of electronic pollbooks. “The value is to the voter because it can help speed up their voting process.”

Others, though, have raised questions about costs and security issues.

Here are some of the advantages most frequently cited by supporters:

Experts say that digital pollbooks are the future of voting technology, but expectations of exactly what they’ll do are changing over time.

It appears the digital pollbook recommendations that come out of the task force will be significantly different from the compromise Secretary of State Mark Ritchie initially proposed in 2012 as an alternative to a proposed Voter ID constitutional amendment that eventually was defeated.

As cities and counties continue to experiment with electronic pollbooks, the trend will likely spread across the nation, University of Minnesota elections expert Doug Chapin said. A presidential task force looking at election procedures likely also will spur adoption, he said.

“I do think things are headed that way,” Chapin said, “Just because of the way elections are evolving in this country.”

Since 2009, Minnetonka has been the only city in Minnesota using electronic pollbooks for Election Day registration on a trial basis.

City Clerk David Maeda, a member of the legislatively approved task force, said that the technology has been a hit among polling place staff. The city used digital pollbooks in 18 of its 27 precincts in 2010 and 18 of its 23 precincts in 2012.

Minnetonka staffers scan a voter’s photo ID, which populates their information into a computerized voting application. Then the technology confirms that the citizen’s address is in the precinct. If it isn’t, a poll worker can print out a map with directions to the correct location.

The electronic pollbooks help ensure that voting requirements, such as age, are met. They also track how many people someone vouches for and automate the registration process, according to a city report. The system, Maeda said, also stops the human error of allowing a voter to cast a ballot at the wrong polling place. 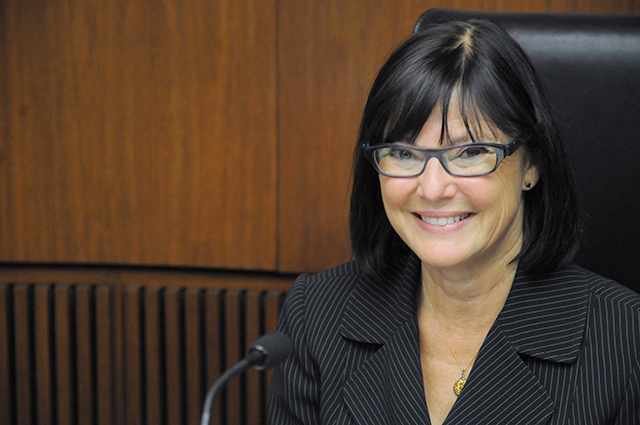 MinnPost photo by James NordDFL Sen. Terri Bonoff: “It would be downloaded from the secretary of state. Same-day registrations could be uploaded back in, and it would make the whole election process much more efficient.”

“For me, once I saw what it could do, the elimination of the mistakes I mentioned … it was a no-brainer,” Maeda said in an interview. “Our election judges just love using it because it helps them do their jobs better.”

The electronics costs behind pollbooks, however, are often expensive. Maeda said Minnetonka used 18 laptops it had available to run pollbook software, minimizing new costs. In the long run, the move could allow the city to hire fewer election judges, he said.

But not in the near future.

“Short term, I wouldn’t dare do that until we really see efficiencies gained in the process,” he said.

In addition to shorter waits at the polls for voters and easier procedures for poll workers, county elections officials could see significant reductions in post-election manual work inputting data. Maeda said those cost savings would be much more significant than those for his city.

“It is a lengthy process. It is expensive,” she said of the input work. “For eight hours a day, you’re staring at page after page of barcodes,” Gelms added. “It’s very easy to make a mistake.”

Digital pollbooks, if properly linked to the secretary of state’s statewide system, would allow the data to be transferred digitally.

During the Nov. 5 elections, lawmakers will be visiting precincts where the pilot pollbook project will take place. About 20 precincts in five cities are participating in the project.

The task force will use that information to put together a report for lawmakers by the end of January.

“It would look just like it’s going to look like this time in Minnetonka, only it wouldn’t just be in a few precincts. It would be in all the precincts, and it would be easy for them,” Bonoff, a member of the task force, said in an interview. “It would be downloaded from the secretary of state. Same-day registrations could be uploaded back in, and it would make the whole election process much more efficient.”

Although many see significant benefits to voters and local officials, electronic pollbooks come with some serious questions.

For one, it’s unclear if the large upfront costs — which strapped local governments would likely have to bear — would ever be recouped. In addition to computer hardware, vendors also charge expensive software licenses for the pollbook software.

Pollbook vendors told Minnesota’s task force last month about some of the costs, which can run to $1,500 for a piece of equipment with needed add-ons, plus yearly fees.

Maeda said Minnetonka isn’t saving money by using them. Even though it used city laptops, the suburb was forced to purchase printers for the pollbooks, which added to the cost.

Gelms said Hennepin County wouldn’t be able to fully recoup the extra costs by decreasing the number of back-end temps it hired after elections.

“We would see some cost savings but not enough to offset the whole cost of purchasing the e-rosters,” Gelms said. “We would need to have some support from the Legislature in terms of money for that.”

He also said that there are concerns that digital pollbooks could be prone to tampering or malfunctions.

Deputy Secretary of State Beth Fraser said that electronic pollbooks are expected to improve accuracy but noted that some of the same issues with paper rosters would remain, such as requiring election workers to select the correct voter record when using the system.

Gregory Miller, chief development officer and co-executive director of the Open Source Digital Voting Foundation, which is building a pollbook application, agreed that there are some key security issues.

There should be standards, too, for how computers communicate with each other in order to standardize voter data transfer.

In addition to technical security concerns, Miller criticized the cost of current digital pollbooks. He called the current prices “fairly nonsensical,” adding, “It doesn’t have to be that bad.” 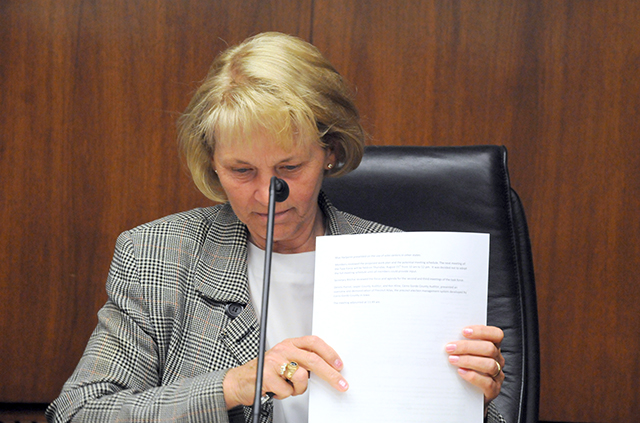 MinnPost photo by James NordGOP Sen. Mary Kiffmeyer: “The value is to the voter because it can help speed up their voting process.”

Miller’s group is working with jurisdictions across the country on the electronic pollbook technology.

Currently at least 14 states permit their use, according to the National Conference of State Legislatures.

Chapin points to Cerro Gordo County in Iowa as an example of a particularly savvy jurisdiction when it comes to electronic pollbooks. Officials there developed their own technology, called Precinct Atlas, to assist voters.

Many other counties have adopted the technology after seeing its success, he said.

“In some ways, Precinct Atlas or the Minnetonka pilot are the purest example of what the Supreme Court called the ‘laboratories of democracy,’ ” he said. “I think that tends to be the best way for innovations like this to spread.”

For most lawmakers and officials, it’s too early to say with much certainty what will happen in Minnesota when it comes to pollbooks.

Kiffmeyer isn’t even sure there should be legislation that comes from the legislative task force.

State legislators and local officials also disagree over who should pay for the technology if the state decides to encourage its use.

“I think that e-rosters generally would bring a lot of benefits to our election administration,” Gelms said. “It would be equally difficult to ask local governments to take on the cost, because it would not pay for itself.”

But lawmakers on both sides of the aisle expressed doubt there would be any money for elections appropriations next session. If legislation moves forward, it would need bipartisan support to secure the governor’s signature.

Right now, there’s bipartisan support for keeping state money out of it.

“We don’t have any money right now,” Sen. Katie Sieben, chairwoman of the Senate elections committee, said in an interview. “It’s not a budget year, so I think it’s really tough. I don’t know.”

It’s also unclear what the technology will look like. When Democrats originally supported the measure nearly two years ago, it was in an attempt to thwart Republicans’ Voter ID efforts.

But lawmakers heard this week that it would be extremely difficult to use the pollbooks for identity verification. Facial recognition software isn’t close to being ready to work in real time at the scale officials are looking for, and most agree that poll workers shouldn’t be forced to scan photos and check them against voters.

“Each meeting I’ve walked away with a different sense of how things were going,” Bonoff said after Monday’s task force meeting. “From today, I would say that a dose of realism hit in … because I had always thought we really could work out a scenario whereby a driver’s license photo could be used as a means of verification.”

Kiffmeyer was incredulous at the idea of using facial recognition software in the polling place. “Are you kidding me?” she asked after the meeting.

Fraser, deputy secretary of state, said it was concerning that even the Minnesota Department of Public Safety was having issues with the facial recognition software.

With so many unknowns, it will be at least a few months before lawmakers start staking out their stances on the specifics of digital pollbooks.

Sieben said she supports modernizing Minnesota’s election system but wants to wait for more information. Any changes to election law will have to move through her committee, which will likely tackle campaign finance changes and online voter registration next year.