Be careful what you wear to the polls today …

When voter Jim Leinfelder went to cast his ballot in the lobby of a North Minneapolis condo late this morning, an election judge made him turn his “Everyone Poops” T-shirt inside out.

“ ‘Why?’ I ask,” says Leinfelder. “and the poll worker said gravely, ‘Because it has political symbols on it.’ ”

“(The T-shirt) has both major parties’ symbols on it, combined with the well-known phrase ‘Everyone poops,’ co-opted from the popular children’s book,” says Leinfelder, a writer and freelance television producer. 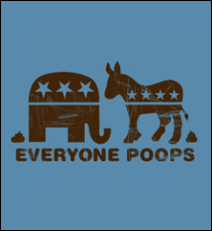 He says he tried to explain the humor in the T-shirt to the poll worker.

“The gestalt of the T-shirt is comity among people of differing points of view,” says Leinfelder, recounting what he said to the poll worker. “Despite our political differences, there are fundamental human needs around which we can coalesce and achieve long-absent consensus.”

The elections worker wouldn’t budge and told Leinfelder there were people in the lobby ready to challenge his vote because of his T-shirt.

“In the interest of just getting my votes tallied and not wanting to hike back home for a change of clothes, I peeled off my non-partisan T-shirt and put it back on inside out,” says Leinfelder.”

“Anyway, it was a real buzz kill to a voting experience I’d been looking so forward to for so long,” he says.