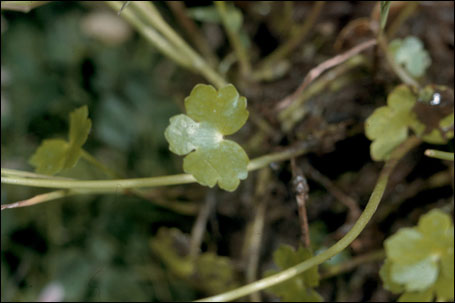 Victoria Ranua, a botanist for the Shakopee Mdewakanton Sioux Community, was performing a rather routine plant survey when she discovered a species never before seen in Minnesota: the buttercup pennywort. And she found it near the sixth hole of a golf course, not a habitat known for its diversity.

“That’s a pretty well human-impacted site. There are no natural golf courses out there,” Ranua said.

Ranua, an environmental assessment specialist, spotted the aquatic perennial Hydrocotyle ranunculoides this fall while indexing the flora on tribal lands — in this case, The Meadows at Mystic Lake. The plant is native to North America, but usually lives nowhere around Minnesota. The nearest place to find one is in Illinois (where it is listed as endangered) or Kansas (where it is found in only one county). It is fairly common in the warmer climates of the southern United States.

“It’s been powerful to think that the [golf course] has been developed and some natural processes are gone, but even if something is developed there are still native plants hanging on,” Ranua said.

State botanist Welby Smith of the Minnesota Department of Natural Resources confirmed the find, calling it “a significant botanical discovery.”

Ranua has since located the plant, which flowers in autumn, at two more tribal wetland locations. “I could not sleep the night I found it,” she said. “I knew I had seen it somewhere else, so the next day I took the kayak out to [a] wetland site and it was full of it.”

The pennywort likely arrived in seed form via waterfowl. It is in the parsley family, growing about 4 to 12 inches tall with green-white flowers.

There are places in Europe where it is considered an invasive species, Smith said, but it’s too soon to say whether it could be a problem in Minnesota. “It’s really hard to tell about these things, but I certainly think it warrants close monitoring,” he said.

There are about 30 plants at the golf course, and there are hundreds at a 16-acre wetland site near Flandreau Trail.

Will the pennywort die over the winter? Ranua now remembers seeing the pennywort in 2006, so it survived the last (mild) Minnesota winter.