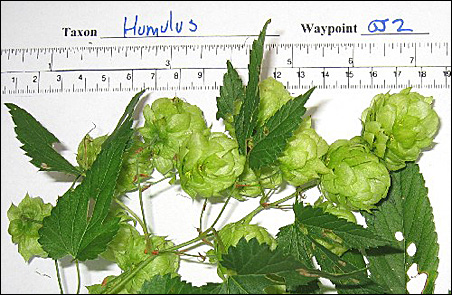 U.S. Department of Agriculture
A hop vine with cones.

An ongoing shortage and high costs of a key beer component have brewers around Minnesota very unhoppy.

Hops are a bittering, aromatic and preservative agent, one of four ingredients in beer, along with water, yeast and malted grain such as barley, wheat, corn or rice. Barley and wheat prices are also higher, dragged along by the escalating market for corn.

Popular hop varieties used for craft beers rose from $3 to $5 per pound in 2006 to $15 to $20 in 2007, according to the Brewers Association trade group. That increase sent a chill through small breweries, brew pubs and home brewers.

Peter Ausenhus, owner of Worth Brewing in Northwood, Iowa, paid $27 per pound early this month on the spot market. He had paid $10 per pound for a year’s supply in October. “Of course our very existence could be in danger if supply tightens even more in the next few years,” he said.

Mass-market brewers like Budweiser and Miller (they make milder beers with less hops) can hedge against market fluctuations, but smaller brewers don’t have that kind of leverage.

Some traditional beer recipes, including India Pale Ale, use more hops than others and may soon be harder to find or more expensive.

Craft beer prices to rise
“Our beers range from very little hops to quite a bit, but I would postpone a beer style rather than change the basic recipe,” said Dustin Brau, CEO of Brau Brothers Brewing Company in Lucan, Minn. “In the near future you may see seasonals and short run beers that lean towards malty rather than hoppy, but at this point the hop shortage hasn’t affected actual production significantly.” 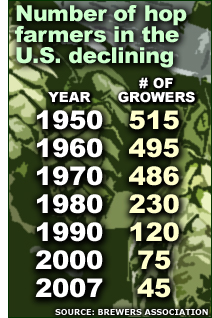 Market watchers expect some craft beer prices to rise as much as 50 cents to $1 per six-pack in 2008.

“I think it’s safe to say that those who haven’t weighed in on price increases will have to raise their prices as well,” said Ryan Anderson, host of the popular MNBeer blog. He said beer aficionados understand the reasons behind the price jump and appreciate the value of a locally made product.

Hop glut is over
Most of the hops in the United States are grown in Washington, Oregon and Idaho, although there is a small amount of the flowering perennial vine produced in the Upper Midwest for local consumption. The beer industry uses 98 percent of the world’s crop.

Brewers use the hop’s female cone, which is slightly smaller than your thumb, or pellets made from it. The cone contains a yellowish powder called lupulin that gives the hop its aroma and beer its bitter flavor. On average, eight to 13 ounces of hops are used in each barrel (31 gallons) of beer.

For many years, hop farmers produced more than the market could absorb; several left the field because of the glut. Total hop acreage in the United States, which grows 25 percent of the world’s crop, dropped by about one-third from 1996 to 2006. It takes three years from planting to harvest, so the shortage is predicted to continue for a while.

Brau is preparing to plant his own crop on a small hop yard at the Redwood County brewery. “It is our plan to be self-sufficient within three years,” he said.