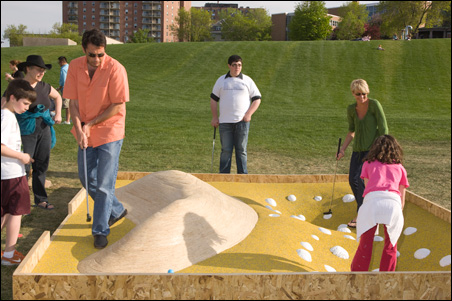 That bustle of activity amid an amalgam of structures in front of the Walker Art Center in Minneapolis is a 14-piece “art as golf” exhibit that brings family fun (really) along with sprinkles of social sassiness to miniature golf.

Turns out there’s more art history and cultural relevance in the exhibit than you may realize.

Since the first putting course was laid out for Scottish ladies in 1867, “the miniature golf course was magic incarnate, a setting in the landscape that allowed for an infinite amount of imagination,” historian Jonathan Haeber writes.

This is interactive art, so you actually play either of the Walker’s two 7-hole courses ($8 adults; $5 kids). Or, you can go scotch and stroll the grounds — and pause to read what the artists have to say about their works. 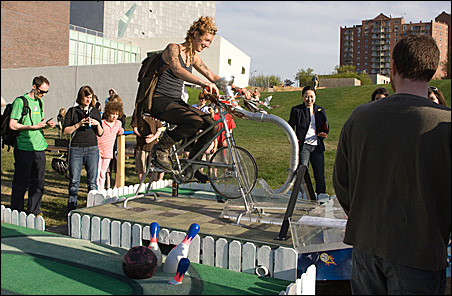 Miniature golf returns to the Walker after a popular run in 2004, said Christi Atkinson, associate director of education. This year it’s part of celebrating 20 years of the Sculpture Garden, where the Spoonbridge and Cherry is among the world’s most photographed outdoor art designs.

If you go for the golf, stick around for what else is there — the place is full of unusual and interesting stuff, as always.

A must-see is the “Design for the Other 90%,” a display (through Sept. 7) of some 30 pieces of low-cost tools and implements designed for the vast majority in the world with scant access to food, water and health care. It’s all inside a scattering of remarkably durable buildings that provide inexpensive, quality shelter in developing countries.

But miniature golf as art history and social commentary?

Invented in Scotland for women
That first miniature golf course was the Ladies’ Putting Club in St. Andrews, Scotland, formed in 1867. Back then, it was taboo for women to swing a golf club more than shoulder high.

Small golf went through a number of well-defined periods, historian Haeber says, with most remembering the “Cultural Renaissance” that ran from 1950 to about 1990. That’s when course proprietors tried to one-up each other with what Haeber called “iconographic symbols of imagination” that were complex layouts on multiple levels and promoted as fun for the entire family. Resort and tourist communities were full of them, and it’s when the windmill and clown’s nose came to define a game that virtually everyone has played at least once.

The social commentary part of miniature golf in culture is more subtle than is on display at the Walker. In its original form more than a hundred years ago, small golf was an elaborate alternative for ladies who were discouraged from playing the male-dominated sport (the notion still persists). Those first small courses were at country clubs, where only the wealthy could indulge.

That began to change around 1925, and the game turned to the masses with the economic collapse that followed.

Great ‘art for the masses’ movement
“The Great Depression, coupled with a high demand for miniature golf, resulted in one of the greatest ‘art for the masses’ movements in American history,” Haeber writes.  “Miniature golf was less expensive than its counterpart, the picture show, and was also a more engaging activity. Though the artistic value of the depression era movies is often highlighted, miniature golf courses were equally artistic, in a sterile/minimalist sense.”

At the Walker, the artists take social commentary from the subtle to the direct.

“It’s fun with a message,” said the Walker’s Atkinson.

Like the first hole, which offers a choice of hitting the ball past Paul Bunyan or into the mouth of Teddy Roosevelt, with this commentary by artist Andrew MacGuffie on a sign next to the tee: “Paul chopped trees down as fast as Teddy (the “father” of America’s national parks and other land protections) could save them.”

An artistic message about water use
On the other course there’s a forest of dangling ropes supporting plastic bottles filled with water, offering a maze with no direct route from the tee to the cup. The designers — from Alchemy Architects, Blake Loya and Geoffrey Warner — note on their sign that the 60 million plastic bottles produced annually in the United States “take three times as much water to produce as to fill.”

Another hole has an elaborate, spiderlike sculpture of wood that designer Zoran Mojsilov said were deformed trees taken from the Pigs Eye Landfill.

The “watering hole” featuring a blue water tower, shown below, is sure to make golfers take notice. The sign notes that it takes “300,000 gallons of water a day to maintain a typical golf course.” This one is by Survival Design (Jason Brown, Larry Brown, Elizabeth Scofield and Frederick Scofield). 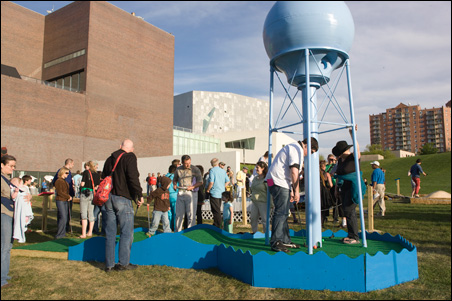 Actually, the designers go easy on the environmental effects of golf courses that, as a recent article in Golf Digest documents, are impressive.

Key concerns about golf courses are the excessive pesticides and fertilizers used to maintain them. An article cited in the Golf Digest report said a study by the Attorney General of New York State says that courses use 2.7 times more pesticides per acre than do average farms.

Perhaps the most stinging commentary is the “Cu Copper” hole (right after Paul Bunyan) by James Dayton Design.

” ‘Sustainability’ has become devalued as a term and concept as more and more people try to be ‘green.’ It has become fashionable, and good marketing, to present green ideas where in fact much of what we see promoted as ‘eco-friendly’ is far from being so.”

A simmering controversy in the golf world
That goes right to a simmering controversy in the golf world. Criticized for years as disrupting wetlands, sullying water and spraying harmful chemicals, golf-course managers have sought recognition and medallions from Audubon International for leaving wetlands intact along with edge grass and swatches of prairie grass and, in some cases, water holes that double as prime wildlife habitat.

The problem, however, is that all those “Audubon” designations have nothing to do with the environmental advocacy group, the Audubon Society, and in many cases the designations have little to with sound habitat maintenance as advertised.

At the Walker, you need not bring your own clubs, sneakers are fine, and there’s no dress code.

And if you hit the ball so hard that it flies off the playing surface you won’t hear anyone say, “You da man.”  Instead, you’re penalized.