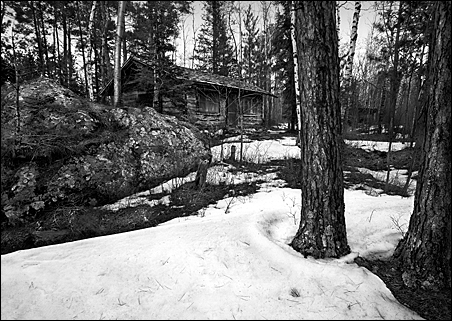 A little log cabin on the eastern shore of Burntside Lake, built by one of Minnesota’s most famous writers, is the state’s newest addition to the National Register of Historic Places.

Listening Point, the one-room structure near Ely that author and activist Sigurd Olson and his family put up in the 1950s, cannot be seen from the lake and is not easy to spot from the nearest road, either. Olson wouldn’t have it any other way. The site includes the surrounding 27 acres.

He penned nine books, including a 1958 title called “Listening Point,” but it is a common misperception that the cabin was his writing shack. He never wrote at the cabin – he was too busy fishing, hiking, canoeing and thinking.

A leader in wilderness preservation
By the early 1970s, more than 200,000 copies of his books were in circulation and he had landed on the New York Times best-seller list. In addition, he was a leader in the national wilderness-preservation movement after World War II, working in groups such as the Izaak Walton League, the National Parks Association and the Wilderness Society.

His writing shack was actually behind his house in Ely. Olson died in 1982 while snowshoeing at age 82. In his typewriter were his final words as an author: “A New Adventure is coming up and I’m sure it will be a good one.”

The Listening Point Foundation maintains the cabin. Visitors can arrange to tour the site through the foundation.

“It lends integrity to the site,” said Alanna Johnson, executive director of the foundation, said of the register’s designation. “And there’s more acclaim for Sigurd. But an important thing is that there are some grants that are only available to these sites and not to others.”

The second on Burntside Lake
There are about 1,600 Minnesota sites on the National Register. Interestingly, Listening Point is the second structure on Burntside Lake to gain that designation, after Burntside Lodge, which is on the portage between the lake and Burntside River. The lodge, built by local Finnish craftsmen, is the oldest commercial resort in St. Louis County, dating to 1911.