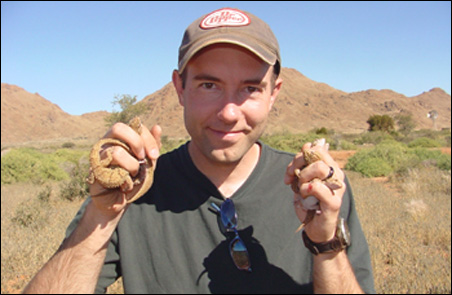 Courtesy of Tony Gamble
Tony Gamble and his gecko friends in Namibia.

A University of Minnesota graduate student, working at the Bell Museum of Natural History with colleagues from Villanova University, has discovered a new family of geckos, the bug-eyed lizard made famous on Geico car insurance commercials.

Geckos, found on nearly every continent, are important biodiversity indicators. The animals also interest researchers because they have sticky toes and scientists want to know how the heck that works.

“And, let’s face it, geckos are really, really cool,” said Tony Gamble, who with Aaron Bauer, Eli Greenbaum and Todd R. Jackman sequenced DNA from 44 species of gecko and reconstructed the lizards’ family tree. There are now seven families instead of six.

The researchers named the new family “Phyllodactylidae.” Many species in the family have leaf-shaped toes (“like a ginkgo leaf,” Gamble said), thus “phyllo” meaning leaf and “dactyl” meaning toe.

There are 103 species in the new family, found in semi-arid and tropical regions in Africa, North and South America, the Middle East and the Caribbean. They range in size from 2½ inches long to nearly 10 inches, including their tails. Most are brown. 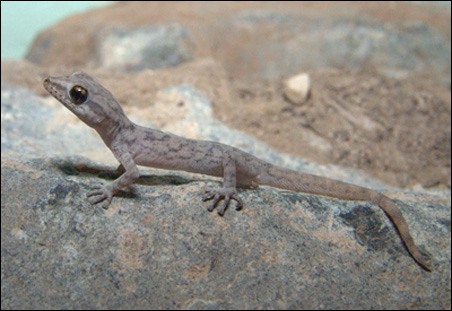 Courtesy of Tony Gamble
Phyllodactylus inaequalis, a member of the new family.

Scientists since Linnaeus have classified geckos by their toe shape and structure, Gamble said, so the DNA-based project revamps the family tree. The lizards, mostly nocturnal, have been around since the time of the dinosaurs and are considered one of the older groups of animals.

Good luck symbols in some cultures, curtain-eaters in others
Geckos also play a significant role in many cultures, Gamble said. In Southeast Asia, they are considered good luck; in parts of Latin America, they are thought to be poisonous and are called “no touch” by locals, although they are harmless. In Namibia, Gamble found residents convinced that geckos ate their curtains. “Probably moths,” he said.

Researchers are interested how the geckos’ sticky toes work on rough and smooth surfaces. It is thought that there may be applications for human medicine, emergency rescue service and military industries. Also of note is the makeup of the gecko eye. “What happens to the eye when the animal is active during the day?” Gamble said. 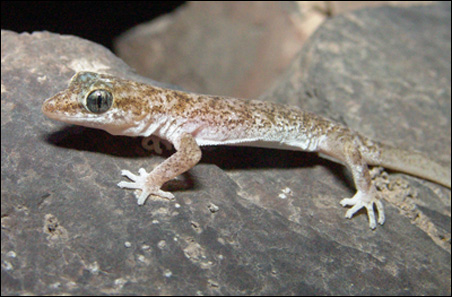 Courtesy of Tony Gamble
Phyllodactylus microphyllus, another member of the new family.

Gamble and Bauer’s work was funded by a National Science Foundation grant. The discovery will be published in the next issue of Zoologica Scripta: An International Journal of Systematic Zoology.

Previously, Gamble had worked on a project tracking the commercial harvest of painted turtles in Minnesota for the pet trade. The turtles interested him, but “I was already planning on a career in geckos,” he said. Still, his car insurance is through Allied. “I hope I’m not too hypocritical in not using Geico,” he quipped.

Why the Minnesota Court of Appeals’ PolyMet decision is so significant

Electric vehicle chargers are scarce in Twin Cities apartment and condo buildings. That may be starting to change