Using new 3-D visualization software it’s now possible to peer inside a severe thunderstorm. This next-generation Doppler radar software shows the outline of the storm; the red “hail core” shows up vividly, with evidence of strong winds immediately above the ground, causing the updraft to “sheer” or bend over at an angle. This new meteorological tool even shows strong areas of rotation in the mid levels of a “supercell” thunderstorm, usually a precursor to a tornado. Just as a doctor runs a Cat Scan and other tests before making a diagnosis, meteorologists use this 3-D weather Cat Scan to determine which thunderstorm (out of 30-60 on a given afternoon) may have the tell-tale signature of a spinning, potentially dangerous storm, called a “mesocyclone” or “supercell”. Most common in tornado alley, from Texas to Iowa, these rotating storms are quite rare in Minnesota — it’s estimated that 20-30% of these spinning storms go on to produce tornadoes.

This is the severe storm that formed over Benton County, near St. Cloud — the NWS issued a severe storm warning for 1″+ (nickel-size) hail. Remember that, on rare occasions, a tornado can develop, even during a generic severe thunderstorm warning. Don’t wait for the sirens to sound to seek shelter. If skies turn green and menacing, and the cloud base begins to lower and rotate slowly, head for the basement, or a small, interior room. Large hail (ping pong ball size or larger) is a strong tip-off that a storm has an intense and potentially violent updraft. That’s all a tornado is, a severe updraft with a focused circulation that reaches the ground. 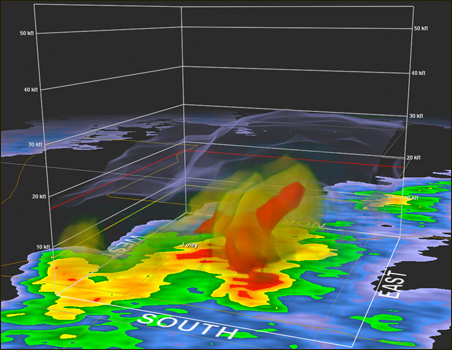 Thunderstorms get a bad rap, and yes, we’re to blame. Sure, they produce crop-flattening hail, terrifying zaps of deadly lightning, and every once in a great while a large, mutant thunderhead spins up nature’s deadliest wind: the tornado. But I have to come clean and tell you something you need to hear: if it wasn’t for thunderstorms Minnesota would have a climate similar to New Mexico from April through October. Precious little would grow here! There would be no large-scale farming to speak of, no agriculture to support our farming community. We’d probably be rationing water, like Phoenix or Las Vegas. Brushfires would be a daily occurrence. Water would evaporate from area lakes, only catfish would be caught in the remaining slime and goop. It would not be pretty. Only 1 in 10 thunderstorms will ever go on to be “severe” with dangerous winds or damaging hail — the vast majority are fairly benign and non-controversial, providing precious rains half the year.

I know, we’re to blame: we always talk about a “threat of storms”, a “risk of heavy rain”, and we tend to complain when it rains on our precious weekends, not realizing how bare the store shelves would be if we didn’t experience those occasional fits of rain, lightning and thunder. So for once I’m going to give the average, garden-variety thunderstorm its due: thank you for popping up in the skies over Minnesota, keeping our lawns green, our fields lush and prosperous, our lakes overflowing with water. I’ll TRY to include the verbiage “opportunity for a thunderstorm” somewhere down the road. Probably not on a Saturday, mind you. I’m not THAT crazy!

Yesterday’s squall line of intense thunderstorms has long since fizzled and fallen apart over Wisconsin, but not before pelting Benton county (just east of St. Cloud) with large hail and some .50″+ downpours. The line of storms weakened as it moved into the metro area, producing downpours and wind gusts close to 40 mph. Today should be quieter, drier with less afternoon drama. The most humid, unstable air has shifted east, a stiff west wind should insure sunshine most of the day, the last time we’ll hit 70 for a few days, at least.

Another weak storm streaks in Friday, spreading showers back into town Friday afternoon, a few hours of rain. Puddles may spill over into Saturday morning (early) and odds are you’ll get off to a damp start for your fishing adventure. Pack a jacket, sunrise temperatures range from the upper 30s to the low 40s up north. That’s the AIR temperature, not the water temperature. The sun may be out (a little) in the morning, but you’ll notice lot’s of clouds, a stiff northwest wind, and a slight risk of a shower or two up north, especially after lunch. We’ve seen worse, and we’ve seen better. On a scale from A to F, Saturday’s weather scores a C-. Keep in mind I’m an optimist.

Sunday should be nicer as the axis of high pressure drifts over Minnesota, turning down the wind speed and warming us up another 5-7 degrees under a sunny sky most of the day. I realize it can be “too nice” and sunny to catch fish, so even thought it will be uncomfortable on Saturday, the low clouds and walleye chop could make for better conditions to catch that trophy northern or walleye. A rising barometer has me a bit concerned — The Lindner Brothers up in Brainerd have told me repeatedly that a falling barometer is idea for catching fish. Before a tornado once the fish literally jumped into the fishing boat! So no, conditions won’t be ideal, but look at the bright side: it won’t snow, no ice pellets, no horizontal sheets of blinding rain this year. And if the weather wasn’t a little uncomfortable, if you didn’t have SOMETHING to complain about, admit it, it just wouldn’t be nearly as much fun, right?

• Thunderstorms weaken as they move into the metro area Wednesday, nothing severe reported, just some wind gusts to 35 mph.

• Today: last mild day in sight for some time, probably dry and thunder-free.

Fishing Opener Update: Soggy start, early showers, especially Wisconsin lakes. Mostly cloudy, windy and cooler, temperatures hold in the 40s northern Lakes (Leech) only reaching 50-53 for Gull, Pelican and the Whitefish Chain possibly upper 50s for White Bear Lake and Minnetonka. Jackets will be required….clouds dominate with a few light showers/sprinkles, especially far northern Minnesota. It may look and feel more like mid October than early May. Sunday will be sunnier, milder, with less wind. A rising barometer both days may damped fish activity, but give it your best shot anyway!