O.K. I’m exaggerating a bit here. Of course you need to go to work, or school, or take care of the kids. Why do the nicest Minnesota days usually come during the work week, when most of us are hopelessly marooned inside a hermetically-sealed box? I’d like to see a bored scientist do a study on THAT. After Saturday’s tropical-storm force winds, whitecaps and invigorating wind chill yesterday was a sight for sore (cold) eyes. Today will be even warmer, temperatures rising well into the 70s, any late-day showers passing off well north & east of town. Hold on, a temperature roller coaster ride is on tap, the mercury gyrating from 50s Tuesday to near 80 on Wednesday, followed by a return to more typical mid-May readings by the end of the week. A sprinkle is possible Tuesday morning, heavier showers and T-storms may rumble in Wednesday night, and at least one long-range weather model is hinting at a thundery Saturday. But I’m happy (and relieved) that I don’t see any more frost, flurries or wind chill for Minnesota through the foreseeable, forecastable future — hopefully until sometime in early October. That would be a nice turn of events.

• What happened to spring? 26 degree low at Hibbing Sunday morning!

• Cooler front arrives tonight — should sail through dry (showers as close as Duluth and Rhinelander, WI).

• Showers & T-storm risk next Saturday (computer models print out nearly 1″ of rain); it’s too early to panic or throw in the towel, but right now Sunday looks like the nicer day.

This is a great summary of 2009’s weather, to date, in the Twin Cities area, and how it compares to the long-term average. Rainfall for the year stands at 4.95″, quite a bit below average, nearly half as much rain as has fallen in the St. Cloud area. As a rule temperatures haven’t strayed too far from “average” since January 1, with a few notable exceptions. No record highs, although we came close at the very end of January and the third week of April. No record lows have been set so far this year, but you can see the big temperature dips in mid January and again in mid March. Oh yes, we remember them well For a cornucopia, a veritable smorgasbord of climate information from NOAA for MSP click here. 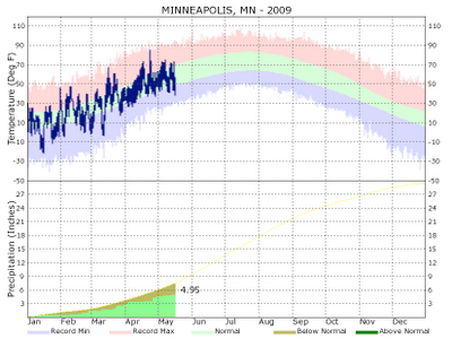 Only in Minnesota can you find yourself wearing shorts…..and a parka, simultaneously. It’s hard to comprehend: a coating of snow in the Boundary Waters Saturday, enough to whiten the ground. Frost was reported over much of central and eastern Minnesota yesterday morning. A little more than 36 hours later the mercury will soar to near 80 later today. From heavy jackets and ice scrapers to shorts and sunglasses in a day and a half. Amazing. Yep, weather changes in a hurry at this latitude. The biggest temperature extremes tend to come near the center of continents. On either coast the weather is modified by ocean water nearby. That puts an atmospheric break on the most severe temperature swings. But not here. This is like meteorological boot camp, some grand Army experiment gone horribly wrong. They test batteries up at International Falls, but sometimes I wonder if all of us aren’t unwilling participants in some massively illegal research program. Let’s put a few million people in a giant test tube, play with the thermostat, and see if we can get them to break! The truth: wild weather forces us to be resilient, patient, inventive and stoic. Besides, it keeps the riff raff out (then how did I get in….)

Strap yourself in and prepare for a wild temperature roller coaster ride this week. 80 degrees will feel GREAT later today and again Wednesday. A cool breeze will blow tomorrow, temperatures holding in the 50s up north. This atmospheric shoving match may spark a fleeting shower first thing Tuesday — an eastbound cool front stands a better chance of sparking more widespread, heavier showers and storms Wednesday night. The heaviest rains may come next Saturday, at least if you believe the GFS computer model, which prints out nearly 1.” of rain for the area Saturday and Saturday night. I sincerely hope the GFS is wrong, by the way. It’s too early to change your weekend plans, I’m sure the extended outlook will change (for better or worse) as the week goes on and new data arrives. Right now Sunday looks like the best day to loiter on your favorite lake, beach or back yard. We’ll keep an eye on the maps and keep you posted. BTW, thanks for checking in! We’re glad you’re here.

Image courtesy of Ham Weather, based in Atlanta. This is a tremendous source of graphics, weather loops and severe storm information. A considerable amount of weather data is free, but true weather enthusiasts may want to consider a data plan. For a very modest monthly fee you can gain access to unlimited global data, and tap thousands of maps for your own web site. It’s one of the best weather sites on the web. Click here for a link to Ham Weather. 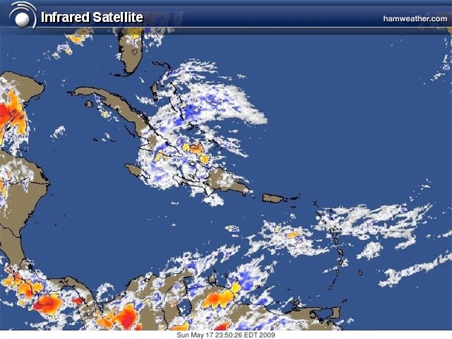 TROPICAL STORM ANA?
Computer models are consistently hinting at a significant tropical depression brewing near Cuba strengthening in the Gulf of Mexico, soaking much of Florida with torrential rains. There’s at least a 1 in 3 chance the storm will intensify over the warm waters of the Gulf of Mexico (although there’s considerable wind shear, which is less than ideal for rapid development). That said, we may be looking at Tropical Storm Ana forming by midweek.

Here is some interesting information about the naming of hurricanes, including the official list of hurricane names for 2009.

For every year, there is a pre-approved list of names for tropical storms and hurricanes. These lists have been generated by the National Hurricane Center since 1953. At first, the lists consisted of only female names; however, since 1979, the lists alternate between male and female.

There are six lists that continue to rotate. The lists only change when there is a hurricane that is so devastating, the name is retired and another name replaces it.