Boaz Frankel is an adventurer. The 26-year-old Portland resident adventured his way to the Mall of America Wednesday, which may seem odd or at least not very adventurous, until you learn how he got to Bloomington.

The sharp-eyed among you will note that automobile does not show up on that list. And that’s his shtick — 77 forms of transportation and counting, but no Ford, Chevy or Lotus Exige in the mix. He’s also trying to avoid major highways.

“I must be close to eight or nine thousand miles by now,” he told me. “With Minnesota, it’s 28 states and Canada.”

Blog and backers
There’s a blog, of course, located here. He has a map and Twitter followers and quite a few backers (most appropriate sponsor: Crystal deodorant). He’s also good about asking for directions, as well as suggestions about what to drive or ride next. His iPhone and laptop accompany him.

Although it’s hard to better the novelty of riding a camel in the United States, Frankel said one of his weirdest rides was on a motorized cooler — a 500-watt electric motor and wheels. 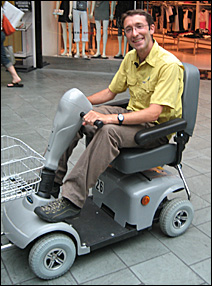 Concern about the up-and-down price of gasoline was a primary reason for the journey; plus it sounded like fun.

“What does a car mean?” he said. “I decided four wheels or more and runs on gas — it’s a car.” He’s been in electric cars and a vegetable-oil-powered ambulance.

He began on April 19 and plans to finish on the 28th of June in Portland. Frankel’s regular gig is producing videos, which he began in earnest at New York University as an undergraduate. He also plays kazoo in a Seattle band. He figures this adventure will cost him less than $3,000. “Mostly train tickets,” he said.

The toughest day may have been a 40-mile walk in car-friendly Los Angeles, or a 56-mile bike ride on a rusty Schwinn with no gears that he bought for $25 at a Salvation Army store in hilly New Hampshire.

At the Mall of America, Frankel rode a Segway, as the security folks do, and a Cushman, just like the maintenance staff and the delivery people. “I’ve never owned a car, although I do have a driver’s license,” he said, shortly before he got on the roller coaster.

Why the Minnesota Court of Appeals’ PolyMet decision is so significant

Electric vehicle chargers are scarce in Twin Cities apartment and condo buildings. That may be starting to change