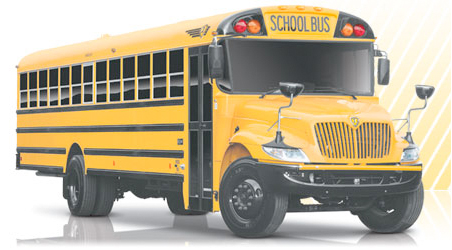 A federal program to develop plug-in hybrid diesel school buses is being tried out in a number of states, but Minnesota parents will have to watch and wait until next year.

Some of our neighbors, including Iowa, are participating in a pilot project to put bright yellow PHEVs into school fleets. Eleven states are trying out a bus made by International Corporation, the country’s largest school bus manufacturer, owned by Navistar. Much of the money comes from a five-year program funded by the Department of Energy.

International claims up to a 65 percent reduction in fuel use with its V8 diesel and 80-kilowatt drive system, which run in what is called “parallel architecture,” in which both motors can operate at the same time. IC also notes a 40 percent reduction in greenhouse gases with the new engines.

The idea of a petroleum engine running alongside an electric one is similar to your neighbor’s Prius, but IC is using a different technology, (The Prius does not need to be plugged in at night and isn’t diesel.) The Chevrolet Volt, which you may have heard about and is due on the market at the end of 2010, is a PHEV.

The project costs nearly $3 million, with the feds paying about one-third, the states and schools another third and the rest from other sources. Mike Martin, a spokesman for the National Association for Pupil Transportation, said a conventional diesel bus costs between $100,000 and $120,000, while the PHEV bus carries a price tag of about $240,000.

Annual savings
A prototype manufactured by Thomas Built, which uses a Mercedes diesel, saved between $900 and $1,350 in annual fuel costs using $3 per gallon gas in 10,000 miles of picking up kids, according to a company spokesman. As the price of fuel rises and the cost of batteries and other technologies in the buses falls, the PHEVs will be more competitive — and that doesn’t factor in the lower cost of reduced emissions.

An IC PHEV is operating in Denali National Park in Alaska to haul visitors closer to nature. Nick Chambers, who writes for the biofuel site gas2.0, said that the IC bus does better in the stop-and-start world of travel than the open road, which makes it a natural for school bus duties.

In April, the DOE awarded Navistar $10 million to build the next generation of PHEV school buses. The goal is a 40-mile electric range. “It’s a significant investment and I think it will help move the analysis and evolution of these products along,” said Martin.

Hybrid school buses are rolling, but not in Minnesota