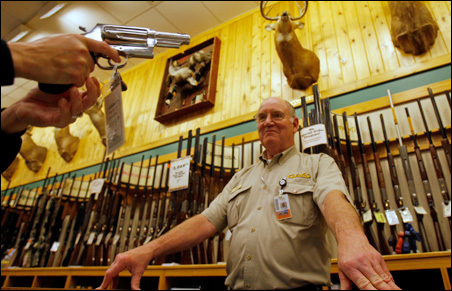 REUTERS/Jessica Rinaldi
Salesman Larry Allen shows a customer a gun at the Cabela’s store in Fort Worth, Texas.

The historian Richard Hofstadter famously wrote about the paranoid style in American politics — you think it’s bad now? This was in 1964 — and subsequent commentators have reinforced the idea that a certain percentage of the citizens of the republic believe in conspiracy theories, the apocalypse and an anti-Viking football officiating crew at every game.

Politicians can profit from the “suspicious discontent” of the electorate, of course. Sometimes even governments can profit. Such is the case in Minnesota.

As documented by John Helland at Conservation Minnesota here, the state’s bank account for fish and wildlife spending is getting an extra $4 million to $5 million because folks are buying ammunition before President Obama bans or restricts firearms.

Perhaps you have not heard about The Ban on guns, or bullets, or shells. That might be because the current administration has not introduced legislation to fool with our Second Amendment rights. But… it could. And if that means I need to drop $13 on a box of No. 6 pheasant loads to make sure I can hunt next fall…

The sales boost in the ammunition business includes an increased collection in a federal excise tax on bullets and sporting arms (11 percent) and handguns (10 percent) that gets split among the states. The tax goes into the Pittman-Robertson Fund, which was created in 1937 by Nevada Sen. Key Pittman and Virginia Rep. A. W. Robertson (he was TV preacher Pat Robertson’s dad) for conservation purposes.

Hunting, fishing funding
That tax is part of a long history of hunters and anglers taxing themselves (see: stamps, duck) in order to fund habitat preservation and restoration and many other valuable conservation programs. Pittman-Robertson generates in the neighborhood of $700 million annually, which is sent back to the states. The states match 25 cents to 75 cents of the federal dollar.

Tim Spielman at Outdoor News reports that Minnesota will get $5 million more than last year’s $10 million. Helland reported that the latest figures show an increase of $102 million nationally in the fund, a 34 percent jump over the previous fiscal year.

Our extra money goes to the Game and Fish Fund in the Minnesota Department of Natural Resources. Wisconsin is also expecting about $4 million extra. According to the Fish and Wildlife Service, each state’s apportionment is determined by a formula that considers the total area of the state and the number of licensed hunters in the state.

Wildlife Management Areas are a popular funding target, as are hunter education programs. DNR officials told Spielman that the extra money will help keep the state fund in the black or stave off the next license increase, rather than be spent on new projects.