This weekend’s annual “Defeat of Jesse James Days” in Northfield, Minn., commemorates the famous 1876 shootout between townsfolk and one of history’s most notorious outlaws.

While this may have been just another robbery by the feared — sometimes revered — James-Younger Gang, it really was one of the last battles of the American Civil War by a conglomerate of unruly malcontents who engaged in a life of brutal terrorism to defend and later avenge the Confederate South.

And while the attempted bank heist yielded no cash and the killing or capture of most of the robbers, the “defeated” Jesse James and his brother Frank escaped and Jesse went on to rob some more.

Northfield’s First National Bank had cash and the James-Younger Gang was out to rob it, of course, but Minnesota was far from Jesse James’s Missouri base.

The real attraction in Northfield was that large bank assets were held by Benjamin Butler, a former Union general, and his son-in-law, Adelbert Ames, a Union commander and former Mississippi governor who had moved to Northfield.

Two of the gang were shot dead during the failed robbery. As Jesse and Frank James escaped east on horseback, the rest, including all three wounded Younger brothers, hobbled off to the west on foot and were captured two weeks later in a shootout near Madelia, Minn. (the town will commemorate its role in the event on Sept. 19).

Shortly after his capture, Bob Younger admitted the Northfield bank was targeted because of its connection with Ames, especially despised by the gang for his support in Mississippi of the “civil rights for freedmen.”  Years later Cole Younger admitted the same (during his 25 years in Stillwater Prison, Cole was a model prisoner and founded the Prison Mirror newspaper.)

And the road from Clay County to the Northfield bank is a story of the bitter violence experienced in western Missouri in the run-up to and during the Civil War — even long after the Robert E. Lee, surrendered to the Union in 1865, more than 11 years before Northfield. 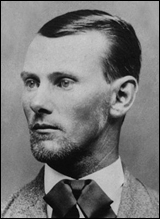 Jesse and Frank James, with their mother, Zerelda, were successful farmers who were among many in border-state Missouri to own slaves, brought there earlier by the their father, a Kentucky transplant and Baptist minister.  The father departed early in the boys’ lives, and Zerelda became a fierce Southern partisan in a state with divided loyalties where few were neutral.

Missouri fell to Union forces early in the Civil War, but outlaw “bushwhackers” waged a violent terrorist campaign that saw Southern sympathizers raid neighbors known to be Unionists, often executing them and burning their homes.

In 1864, Jesse James (then 16) became a “bushwhacker” with the infamously violent “Bloody” Bill Anderson. Among his savage raids, Anderson’s guerrillas massacred 22 Union soldiers (on leave and unarmed) before scalping and mutilating their bodies. Followers of Anderson, who was killed the same year that James joined his group, often dangled scalps from their horse bridles.

At about the same time, Cole Younger and Frank James were part of an equally brutal bushwhacker gang headed by William Clarke Quantrill, who led the 1863 raid on Lawrence, Kan., burned the town and killed some 200 “jayhawkers” who supported Kansas entering the Union as a free state.

For the James and Younger brothers, their early experience as hardened guerrillas became a life of defending the Confederacy during the Civil War and avenging the South’s loss long afterward.

For income, small banks were easy pickings but were targeted for revenge killings. One was a small bank in Gallitan, Mo., where Jesse was said to have shot the cashier in the mistaken belief he was a former Union militiaman who had killed “Bloody” Bill Anderson.

The James’s later took to robbing railroads and stagecoaches, and writing notes to newspapers about their high profile crimes. Railroads, especially, were despised at the time, and so a letter that Jesse wrote to the Kansas City Times helped build a populist myth.

In it, James wrote: “Just let a party of men commit a bold robbery and the cry is hang them. But (President Ulysses S.) Grant and his party can steal millions and it is all right. They rob the poor and rich, and we rob from the rich and give to the poor.”

The myth was that Jesse James was a latter day Robin Hood.

Hardly, wrote Mark Swonitzer on the DVD jacket of a PBS film for “American Experience”:

“…Jesse James, so the legend goes, was a Western outlaw, though, in fact, he never went west; America’s own Robin Hood, though he robbed from the poor as well as the rich, and kept it all for himself; and a gunfighter whose victims, in reality, were almost always unarmed. Less heroic than brutal, James was in fact a product, from first to last, of the American Civle War — a Confederate partisan of expansive ambition, unbending politics…a member of a vicious band of Missouri guerrillas.”

And so, there was much behind the Northfield bank robbery by Jesse James, his brother, and the Youngers.

Meantime, back at the present-day James Farm museum near Kearny, Mo., where the restored farm home stands with the slave quarters out back, store visitors can buy their kids a blue Union cap or a grey Confederate cap of the kind worn by Civil War soldiers. As perhaps evidence that deep and divided loyalties persist, the clerk says most caps sold are grey with a Dixie Flag.

Ron Way covers the environment and energy issues. He can be reached at rway [at] minnpost [dot] com.